Last night on the TV news they seemed to be struggling for an accurate figure of how many were affected by the closure of the Geelong line. One said “hundreds”, another said “up to a thousand”.

Figures on V/Line’s web site, which summarise the number of people on each train so you can plan your trip to avoid the packed ones, indicate that about three thousand catch the Geelong line each peak hour.

The figures appear to show 100% when the services are over-capacity — eg when people end up standing or sitting in aisles on the trip. 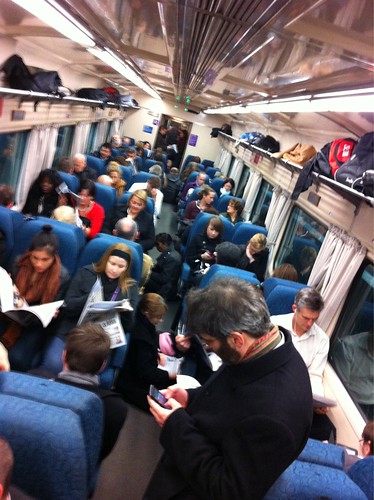 Looking at all the lines, the figures (into Melbourne before 9am; out of Melbourne between 4pm and 6:30pm) are:

I knew they’d grown strongly since the Regional Fast Rail upgrades were completed mid last decade, and the 2007 price cut, but I’m almost surprised to see the Bendigo and Ballarat lines up within about 10-15% of the Geelong figures. This probably emphasises why V/Line and the Department of Transport have been so keen on the Regional Rail Link project, to get all the busiest lines on their own tracks within the suburban area.

The Bendigo figures are likely to drop when Sunbury and Diggers Rest stations join the electrified Metro network later this year. This will also free up some carriages to run on other lines.

Obviously off-peak passengers are also affected by line closures, and we don’t have figures for them. To a greater extent than Melbourne suburban services, V/Line services are very concentrated in the peak (trains every few minutes in some cases), but quieter outside it (mostly hourly). Something they could/should do to help spread the peak load is upgrade off-peak frequencies.

PS: I see some real figures have made it into an Age Online story this morning.

6 replies on “How many catch V/Line in peak hour?”

So every day, 300 people emigrate to Geelong ? How does that work then ?

@enno, what are you talking about? Please refer to the post title.

No, that’s not what it says. In both the post title and repeatedly in the text it says the figures are for peak only.

So you are saying that some of those excess people sneak back into Melbourne outside peak hours ? Alrighty then.