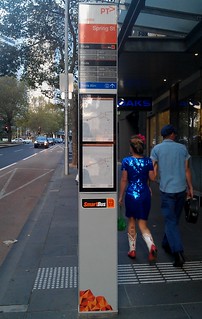 Much of the tram and bus stop signage around the CBD was modified over the weekend, with PTV (Public Transport Victoria) logos replacing the Metlink logos. And the Metlink web site now forwards to a reskinned (but essentially identical, so far) PTV web site.

But it would be a mistake to assume this is just a rebranding exercise.

PTV is the trading name of the Coalition government’s Public Transport Development Authority, which describes itself thus:

PTV was established in April 2012 with the aim of improving public transport in Victoria by:

In terms of who’s in PTV, primarily it’s made up from a merger of the Public Transport Division of the Department of Transport, and Metlink (whch, it must be remembered, was purely a marketing and comms organisation).

Eventually (when the dust has settled on Myki) it’ll include the Transport Ticketing Authority as well. It’s got a CEO (Ian Dobbs) who replaces the former Director of Public Transport (Hector McKenzie), and a board of directors, which (within 12 months of establishment) should include a community representative. Other than that, we don’t know a great deal about the internal structure yet.

Dobbs was head of the Public Transport Corporation in the 90s, under Kennett. Some cynics think this may be the sign of a slash and burn strategy coming up, but I’m thinking (glass-half-full, and remembering that this government came to power in part because it promised to improve public transport) it may mean he’s just good at implementing government policy and finding efficiencies… remembering of course that things like the abolition of guards on trains in the 90s enabled more frequent train services on weekends.

(Maybe you kids don’t remember when Sunday trains were every 40 minutes all day. From April 22nd, they’ll be every ten minutes on the three busiest lines. And weekend trains are double the length of those in the 90s, so we’ll have 8 times the capacity.)

Of course, working underneath Dobbs is essentially the same workforce that was previously there in PTD and Metlink. So it is unclear how much things will change.

Why not call it “Metlink”?

They wanted a statewide name, not a metropolitan-centric one.

OK then, why not “Viclink”?

Dunno, but Viclink isn’t the best ever name, is it.

Will it make a difference?

Too early to say. The goals sound good, and I know from having met him that Dobbs has some good ideas and a determination to make a positive difference… but watch this space.

5 replies on “PTV: it’s more than just rebranding, but will it make a difference?”

“provides a single contact point for customers wanting information on public transport services”
Then how come if I put “Tidal River” into the PTV’s journey planner, it gives me Riversdale Road not Wilsons Prom? No mention of the bus to Fish Creek.

It’ll be interesting certainly. I’m pretty disappointed that its virtually all DoT and Metlink staff. Neither organisation seemed to show any real expertise or competence, hard to see how merging the two organisations will suddenly fix things.

The network map that was “coming soon” in 2006 (and now references seem to have been removed from the PTV site) a prime example of Metlink and the DoTs, RRL seemed to be a project conceived in a vacuum without any thought to alternatives, or at the very least zero transparency with the public. Either way, the organisation needs to some real expertise brought in from another state or abroad.

Still at least now someone is in charge of coordinating things, and there will be less of a tangle of separated organisations not doing much communicating.

A few weeks ago there was a beta Metlink website which re-incorporated the long lost interactive transport map. It’s protected by password now, however. Does anyone know if and when this will be implemented?

Victoria, in the clink.

It’s “Viclink Departures” on the heading on the mobile site, although the URL still refers to Metlink.