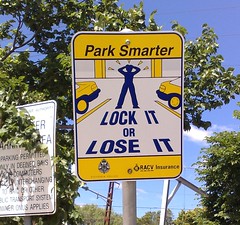 My neighbour Bob had his car broken into this morning. He said he heard noises outside and went out to find a bloke smashing up the steering wheel and console, apparently trying to hotwire it.

When the bloke realised Bob was out there he shouted “I’m coming out mate, I’m coming out!” He did so, pushed past Bob and ran down the street. Sounds like the bloke wanted to avoid a physical confrontation.

Bob says he inadvertently left his car unlocked overnight, and suspects the bloke was just an opportunist. He also thinks he may have been affected in some way by drugs, alcohol, or something else.

I’d have to assume a pro could have hotwired a car in seconds, and not made enough noise to rouse people. Bob’s got an older Commodore — perhaps it doesn’t have an immobiliser, though it’s unclear if the bloke would have known that.

The police CSI team came and took fingerprints, but one would guess they won’t have much luck finding anybody… more likely they might pin that on him if they find him for something else.

I thought nobody would try and break into a car in a driveway, because the assumption would be that somebody’s home. The Lady Cop said you can never assume your car in your driveway is safe. Some people will notice an unlocked car and grab gold coins from the coin tray — you wouldn’t even know anything had happened.

Bob’s okay… he was just a little shaken. But his car will need some repairs.

It reminds me that although Bentleigh is a pretty safe, low-crime suburb, it’s good to take care. I sometimes leave my car open, windows down, doors unlocked if it’s a hot day and I’m expecting to go driving somewhere. The lesson I’ll take from this is to at least ensure the doors are deadlocked (which should also activate the immobiliser, hopefully preventing hotwiring) whenever the car is unattended.

6 replies on “Lock up your motors”

Damn shame you can’t leave your car in the street without some jerk trying to break in.
Yeah, an older Commodore is a sitting duck.

We had the same thing happen to us a few weeks ago in Essendon. I normally lock the car, but must have forgotten to to this time. They went through our glovebox and nicked my 12v/240v inverter and my cigarette lighter USB connector, but they left the silver coins in the console. Cops said there had been a few such incidents recently, but they didn’t take it any further with us, i.e no CSI.

Our car was broken into the second night we moved to Flemington. Admittedly, it was left in the street as there are no driveways in our tiny cottage-infested street and they must have been drunk/drugged if they thought that a fifteen year old Magna station wagon would yield anything remarkable – it was the last model to still feature a tape deck!

They did, to my husband’s annoyance, steal his pocket knife and our first aid kit. Thankfully, our brand new Melways was not to their tastes.

Some years ago I left my car at McKinnon station for the day and when I came back it was missing. We had started looking for a car to replace it (via the Insurance company) when they rang to advise that it had been found. In Grey St, St Kilda. We were expected to go out there (on a Saturday night, no less) to bring it home, only to find when we got there that the battery had been CUT out of the engine bay. Couldn’t just get a replacement battery, had to have it towed to a repair place. Then the insurance company lost it (had no record of the call when we rang on the Monday morning) and it took way too long to get it found, repaired and returned to us. All for an ancient rusty Corolla. I would’ve been much happier it it hadn’t been found!

When I lived in the western suburbs of Sydney for a few months my car was damaged continually by things being jammed in the door locks in an attempt to open it up, I found the blade of a pair of scissors in there and what looked like damage from a screw driver, talk about the wild west, it didn’t matter where you parked.

I think my current car a Ford BA pretty much can’t be stolen, besides the immobiliser if the steering lock is forced it drops the mechanism into the column and a the steering column needs to be replaced before it can be driven.

I think like burglaries you have to wonder what is worth stealing, I can’t imagine someone selling a CD player or a flat screen down the pub anymore? If there breaking in to take gold coins they’re addicts.

A few years ago my friend opened up his car, loaded his laptop and uni books onto the passenger seat and was about to climb into the drivers seat to drive to uni when his phone rang. He answered the call, and absentmindedly walked up to his front fence, which he sat on while he spoke for a few minutes. The car meanwhile, was sitting about 10 metres behind him, at the bottom of his driveway, in his front yard, drivers door still open. A minute or two later he finished the call, turned around and walked back to the car to find the laptop gone.

Someone walking past must have seen him put it on the seat, then walk away for a minute. In that time they jumped the fence he was sitting on, snuck down the yard, grabbed the laptop then either snuck back the way they came, or more likely went down the side of the house and jumped his back fence. All while he was mere metres away with his back turned.

And yesterday my friends bike was stolen from my street, a cheap bike, locked with a cheap lock.