On the way back from Walhalla, we decided (at Peter’s suggestion) to go via Yallourn. He said there was a lookout with a good view over the Latrobe Valley, and the power plants, and the road through Yallourn was very close to one of them..

We started off by diverting off the road to a spot called Peterson’s lookout. This turned out to be a long narrow dirt road to a view which, you’d have to say, wasn’t outstanding — but reading up on it now it sounds like we needed to go a little further down the road for the real view.

In any case there was a better more-accessible view a bit further along, on the main road itself. Looking over the Valley, you could see a fair bit of haze, and many smokestacks in various directions.

We drove on, stopping briefly in the town of Yallourn North, which apparently originally opened as the romantically named “Brown Coal Mine” in 1917, and was renamed in 1947. There’s still a Brown Coal Mine Road leading into the eastern side of town, though the signs seem to have disappeared in favour of the less descriptive C103. 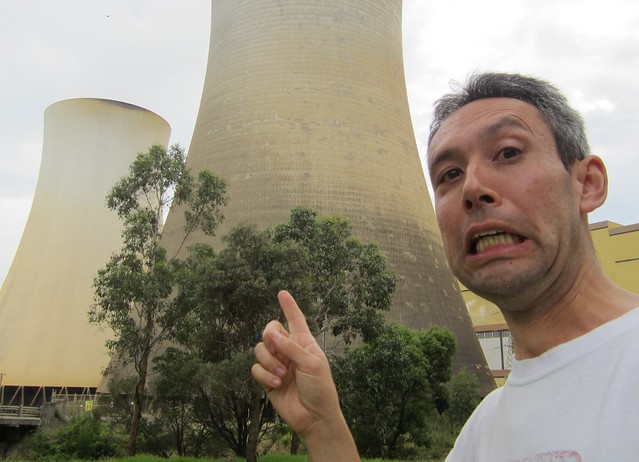 A little further on was the power station itself. It looms, huge, over the road. We stopped off in the viewing area, which has a picnic barbecue, powered by — you guessed it — electricity.

The cooling towers are impressively large.

Of course, they often shows these on the news when talking about carbon emissions, even though (as I understand it) it’s steam that comes out of them, not the smoke from burning coal.

Down the road a bit was an open cut mine viewing area. It’s not hard to see how decades of mining for coal has ravaged the landscape. It ain’t beautiful, that’s for sure. 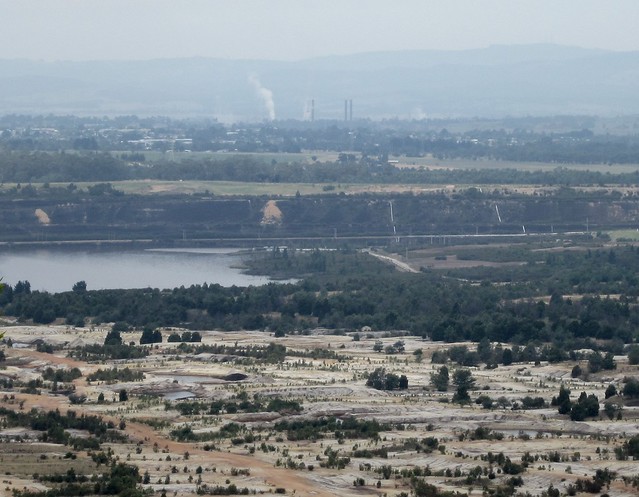 But one could argue that farms of wind turbines or solar panels or dams aren’t beautiful either. You know, eye of the beholder and all that.

The real problem is the emissions. Yallourn isn’t as dirty as Hazelwood, but as this table notes, coal sits at about 1000 grams of CO2 per kilowatt hour over the lifecycle of the generator, compared with about 10 for wind or hydroelectric, or 32 for solar. 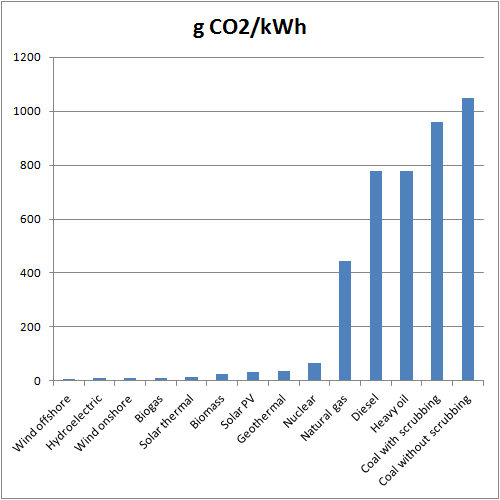 In other words, even the cleanest coal is much, much dirtier than renewables.

And while there might be doubts about a single renewable source being able to provide baseload power, other countries such as Germany are using a variety of sources, with a stated aim of 35% renewable electricity by 2020, and 80% by 2050. Impressive stuff, and I bet we get more sun than they do.

I grew up in nearby Yallourn Heights, and have no doubt that living so close to heavy industry was a factor in my and my brother’s severe asthma as kids (admittedly genetics played a role in this also). I suspect that coal mining was the main culprit rather than the power stations, however.

Australia’s energy needs aren’t likely to be met by solar/wind alone, nuclear needs to be kept as an option. I think that fear and the NIMBY syndrome will keep Australia free of atomic energy for the foreseeable future though.

Not sure if the actual town site has been dug into yet, but the lake is the old Yallourn oval/cricket ground.

I went to uni at Churchill during the 90s and had to go past the power stations on the bus/train every day.

We don’t get more sun than Germany at night.

I knew the area pretty well years ago, but Brown Coal Mine as a name is new to me.

The cooling towers belching out steam are quite a useful propaganda tool. You don’t even have to say anything about them as their horrible pollution is there for eyes to see. No need to mention water vapour.

Yallourn North was elevated and overlooked the mine. So is the YN township still in existence? I can remember the main street, lined with workers houses with vertical exterior boards.

Originally Yallourn North was were the SEC employees lived that didn’t want to live in the very regimented (and expensive) Yallourn township. From memory the original residents were squatters, they didn’t even own (or lease) their land. When Yallourn was flattened, the SEC moved the houses and staff to surrounding areas, including the commission owned land at Yallourn North.

The Brown Coal Mine of the name, incidentally, is not the Yallourn open cut. It refers to the original open cut on the north bank of the river. This was opened in the 1880s, died after a couple of years (one contemporary description of its coal was “you couldn’t get it to burn on a wood fire”). It was reopened in 1917, closed in the late 20s (when they finally got the Yallourn boilers to burn Yallourn brown coal). It was reopened during WWII during the shortages of coal, and closed in the sixties from memory.