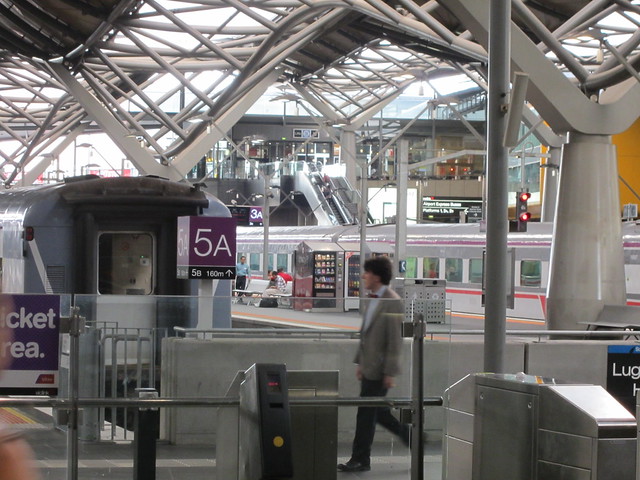 Reports from the UK suggest Doctor Who has prompted more people to wear bow ties. I don’t know if that’s rubbed off in Australia, but there were certainly more bow ties and fezzes than I’ve ever seen around Melbourne yesterday, both at the venue (the Plenary at the Melbourne Convention and Exhibition Centre) and on the way to and from there.

I was impressed that they sold out such a huge venue — twice. (As far as I can see, in the configuration we saw, the Plenary seats over five thousand people.)

And the fact that it was a balanced demographic (male and female, family groups and individuals — not just nerds) attending shows the programme reaches a much wider audience now than it did when I was growing up.

Indeed, at a barbecue on Saturday night, the laughter that I might have once faced when describing the event I’d been to was instead replaced by envy from some who’d tried and failed to get tickets.

Can I just say the event was excellent, by the way. Some great music, bringing memories from the past few years of the show flooding back, as well as some nods to the “classic” episodes of my youth. Host Mark Sheppard was good, and to my surprise, composer of all of the music (bar the theme tune) Murray Gold was also in attendance. Tony has a good write-up of the concert. 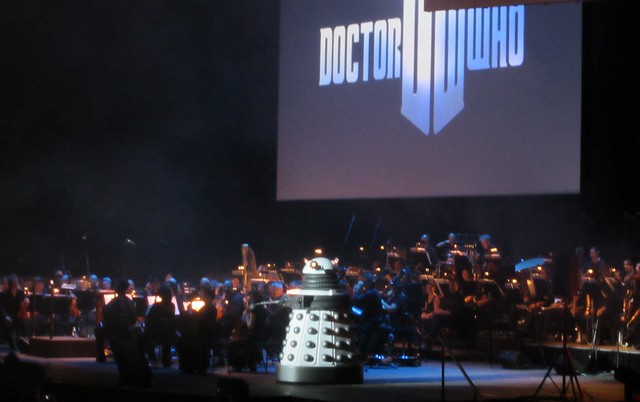 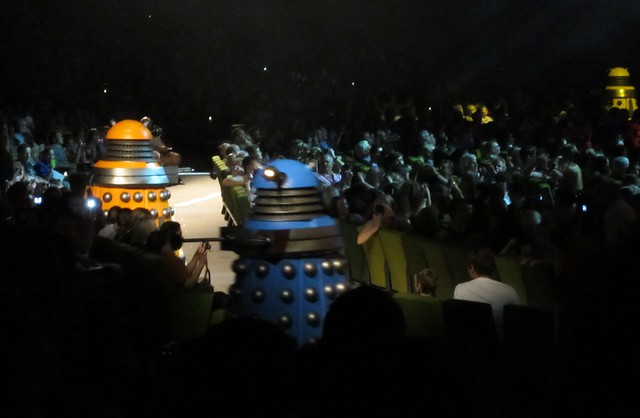 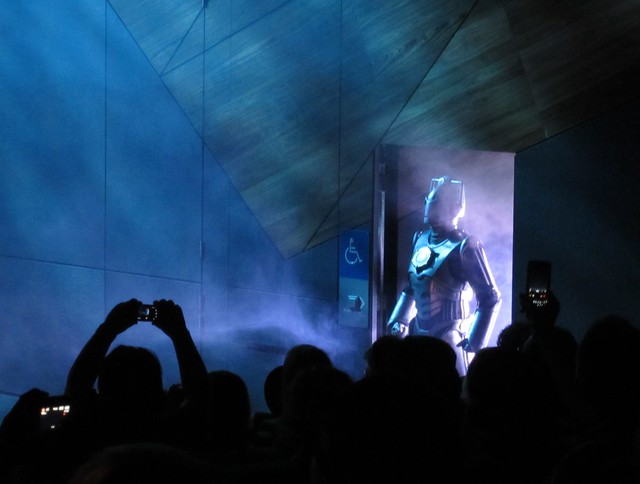 6 replies on “The Doctor catches V/Line”

Amazing that Dr Who theme can still be so popular – and most of the audience wasn’t around to see the first series.

I don’t recall an event I’ve been to (except perhaps for Kylie) that I enjoyed more… I was grinning like an idiot almost the entire time. Although the show was truly excellent (a real thrill just being in the same room as Murray Gold and Mark Sheppard), I think both the before and after was just as much fun, seeing everyone in costumes and also getting reactions from kids who were there (I wore my full length scarf, a Fez and had multiple Sonics). A couple of kids with their own scarves got photos taken with me and I also got my photo taken with the Dalek Girls.

The cheer that went up in the auditorium for Cybermen, Daleks, and when the theme was finally played I don’t think I’ll ever forget.

Best part though was at the end when we were leaving Mark Sheppard was in the foyer and we (and a bunch of other nerds) walked the entire length of Jeffs Shed with him, he was chatting with people and asking us what we thought of the show. What a great ambassador for Doctor Who (not to mention he’s the Demon Crowley from Supernatural, and was also in Battlestar Galactica).

I’d imagine they’ll look seriously at touring this show around the world, they’d be crazy not to.

Comment from Jacqui, a friend who went to the evening concert:

“Just as many bow ties & Fez at evening show as well as 4 girls own Dalek dresses with light up headbands! :)”

She also ran into Murray Gold in the Hilton the next day!

I was pleased to discover that Mark Sheppard’s dad (who played Canton the elder) is W Morgan Sheppard. He was in Max Headroom as Blank Reg.

I was there too and loved every second of it. The venue was fantastic. I wish I went to more events there.

I went to the 2pm showing and we had some technical difficulties when they were doing the Christmas Specials. The video on screen played, but then all of a sudden the Doctor Who logo came on, and the video stopped. The number of Sonic Screwdrivers that appeared from the crowd was fantastic! Needless to say, the sonics fixed the problem ;)

I love that Iron Man was there too (final photo)!

I have a rule of thumb: never trust a man wearing a bow-tie. It’s one of those prejudices built from experience.