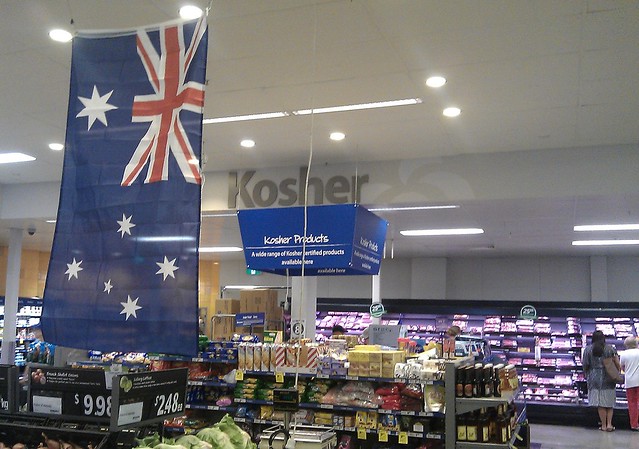 2. I was a Flag Monitor in grade 6. Along with my mate Mark, we put the flag up on the school flag pole. Apart from a minor hitch on the first day when it went up upside down for a short time, there were no issues, though I’d imagine doing the same job for the Elizabeth Street roundabout would be somewhat more time consuming: 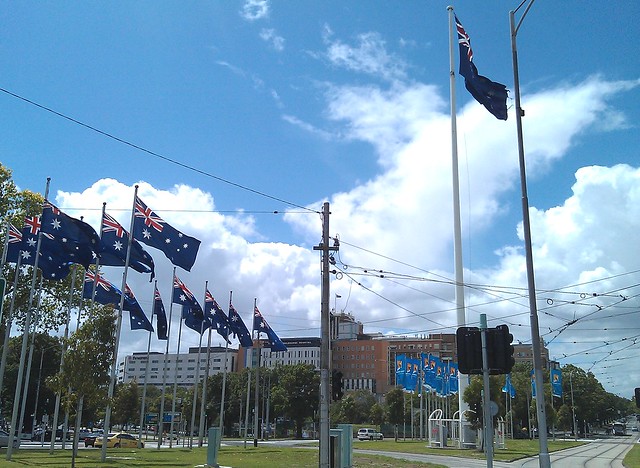 (I’m probably safe in assuming they go up and stay up.)

3. I was pondering, as debate about immigration and asylum seekers rages, if our Federal politicians are familiar with the second verse of our national anthem. (It was originally the third verse. There were originally more in the song, but the national anthem only incorporates the original first and third. We used to sing both in high school, at assemblies and so on.)

Obviously one should be wary about determining policy from lyrics written circa 1901 (much of the song was written before 1878, but this verse was added for Federation), but still, I’d love to hear Ms Gillard and Mr Abbott’s interpretation of them.

Beneath our radiant Southern Cross
We’ll toil with hearts and hands;
To make this Commonwealth of ours
Renowned of all the lands;
For those who’ve come across the seas
We’ve boundless plains to share;
With courage let us all combine
To Advance Australia Fair.

In joyful strains then let us sing,
Advance Australia Fair.

yeah, happy Oz Day. Seeing kosher food in the supermarket near you doesn’t surprise as you live in Jewish area. I bet Woolworths in Melton has displays of pork meat instead!

….maybe that’s why they don’t actively encourage anyone knowing the second verse?

The problem is that nobody wants to live in the boundless plains. Not even the camel farmers will go there. ‘Ghans ain’t what they used to be.

Good point, but the average citizen struggles with the first verse let alone the second!

When I went to a public school in the early 70’s we started each day with God save the Queen and the Lords prayer (CofE version), I don’t remember this in High school in the mid 70’s, maybe Gough changed things?

There’s a ‘patriotic’ flag applet that you can use to customise your Android. After a few minutes thought, I selected the Aboriginal flag. Aussie one has been hijacked by too many yobbos.