Along with the access space required to get cars in and out, it’s wasted space because apart from perhaps $20-30 per day in revenue, it isn’t used for anything.

This post from Gordon Price compares a few cities — the contrast between Houston and Toronto is particularly stark. (There are more in this discussion thread at Skyscraperpage.com.)

How would Melbourne stack up? I’ve had a go at it, by plotting the red onto a Nearmap image, and scouring Nearmap at high resolution, then checking Google Streetview to see if a carpark was ground level parking, or a multi-storey (which at least piles cars on top of each other, meaning more efficient use of the land — even if it is still parking and is fugly) or parking on top of buildings. 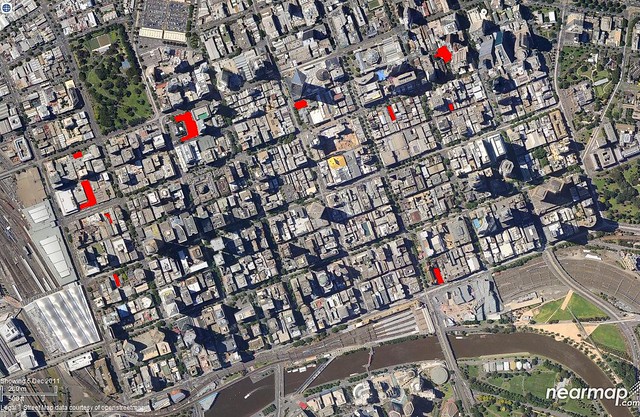 I’ve only done within the Hoddle Grid. Have I missed any, or made any errors? Leave a comment.

You’d have to say that in summary, there’s not much. The tiny carpark near Lonsdale/Elizabeth Streets that I used to watch from on-high has vanished, and is being developed.

The parking at the back of The Age building (Lonsdale Street, behind Spencer Street) will, I’m told, vanish when the whole property is re-developed in the nearish future. The back of The Old Mint building (Latrobe/William Streets) is the other prominent area.

There’s a small amount of parking in front of the William Angliss Institute building. This is a perfect example of why it’s such a waste of space. Ten cars accommodated, taking up about half the open/garden space in front of the building.

Apart from that, the remaining surface parking is mostly in the grounds of churches — St Paul’s, St Francis, Wesley Uniting. (Scots Church and others have multi-level parking.)

And of course… there’s street parking, particularly along the non-tram streets such as Lonsdale, Russell and Exhibition.

See, in a city centre that has around half-a-million people a day visiting it, you can’t afford to have lots of people bring their cars. If you try and find space to leave hundreds of thousands of vehicles, that doesn’t work — not to mention the traffic congestion it creates. Bringing them in by more efficient means (particularly mass transit) is the only way it can work.

PS. Thanks for suggestions. The map has been slightly modified.

9 replies on “How much ground level parking is there in Melbourne’s CBD?”

Thanks for bringing up this issue. Ground level parking is a waste of a valuable resource.
So it’s “Well done” to the previous State government for introducing a congestion levy on short-term city parking spots of up to $910 a year. Given that this is passed on to the motorist, it makes using public transport to get to the city relatively cheaper.

The tiny red dot in the north-east corner of the CBD is this carpark, located in Chinatown on Little Bourke Street, between Russell and Exhibition:
http://www.flickr.com/photos/legoblock/5859782220/

The surface is only gravel, the carpark attendant sits in a beaten up tin shed all day, and you have to leave you keys with them in case they double or triple park cars in front of you.

The carpark behind the old Age bulding is not really single level… there is another level underneath. Still, two levels is pretty wasteful.

@njptower, the Vic Market car park is huge, but yes, that’s outside the Hoddle Grid (eg the boundary of Flinders, Spencer, Latrobe and Spring Streets).