Happy new year. This was the view last night from Footscray, looking along the Maribyrnong towards the City. By the time they’d finished, there was something of a smoke haze. (From where we were, we couldn’t see the spire fire.)

I was curious how many people turn out to watch fireworks for New Year’s Eve in different cities around the world. Here’s some figures I found looking around on Google News, and watching SBS News. 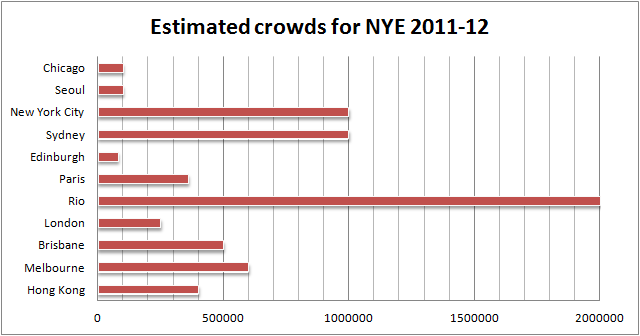 (I’ve tried to stick to post-event figures, not expected attendances, and have only used cities where an actual hard estimate was given, not a vague one like “hundreds of thousands”. Got a cite for other figures? Let me know.)

Obviously in the northern hemisphere it’s winter, and cold weather would put people off. But watching the footage and reading the articles, it’s clear that these events are major drawcards for tourists as well as locals.

In many cities NYE is obviously a major event — including in Melbourne — and takes a lot of organising of fireworks, street closures, emergency services and transport.

It’s funny to think that just twenty years ago, there was no official marking of New Year’s Eve in Melbourne. I remember going into the city for the countdown in about 1993, waiting for midnight (no fireworks that I recall) then hurriedly catching the last tram home at about 12:05am.

1999 into 2000 was the first time I recall it being a major event, with all-night trams and trains (for the first time?). Then it seemed to get some momentum in terms of crowd numbers, with more and more each year, but the organisation fell short, with no all-night transport except Nightrider until the now infamous 2003-04 debacle.

Since then things have been a lot more organised, and as the city has grown, people have also responded to the event, with about double the crowd last night compared to 2003-04.

Someone made some comments the other day about New Year’s Eve bringing people together, a shared experience that strangers can enjoy together. That might be misty-eyed, but I like the sentiments. Certainly I wished some strangers a happy new year last night.

6 replies on “How many people watched the fireworks in different cities?”

I was in Nice, France for NYE this year. Surprisingly, there were no “official” fireworks, although we could see the ones from both Cannes and Monaco. Still, quite a few thousand people out on the promenade, most with either champagne, their own store-bought fireworks, or both. It was a good night. It certainly was a change to the packed mega-shows I’m used to from Melbourne.

daniel
a really nice pic of the fireworks from footscray. thanks
yeah, I guess more estimates are a bit rubbery, but probably within the ball park. thanks for putting the chart together.

I’m starting to wonder if you were in the same apartment block I live in.

Just read your post on the 2003-04 public relations battle and think to how just 8 years later, thanks to Facebook and Twitter, we’re far more able to hold the government to account as a result.

Sydney looks to have a high proportion of it’s population attending compared with other much larger cities.

I attended Sydney’s a few times in the past when it was much easier to find a nice spot for a picnic on the harbour foreshore, now I wouldn’t go near the city on NYE.

did Greece fork out for fireworks?