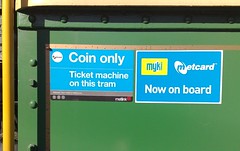 Metlink has posted the full list of metropolitan fares for 2012, as well as regional fares.

My current yearly ticket doesn’t expire until April, but I’m thinking I’ll jump in and renew it — I think I have the dosh available.

Through the PTUA it’s $1120 for zone 1, including a year’s PTUA membership, and as long as you order and pay by December 22nd. (Some big employers also offer Commuter Club discounted tickets.)

Of course, the other alternative is I just wait until my Yearly expires next year. By then the Commuter Club Yearly would be about $93 more. Hmm.

What, if anything, are the rest of you doing?

(Note: occasional users can also beat the price rise by stockpiling Metcards, bearing in mind that at some stage next year they’ll need to be either used, or returned for a refund. Refunds normally incur a fee, but based on past experience the fee may be waived. You can also pre-purchase up to two Myki Passes on a Myki card at the old price. Myki Money however is charged at the fare at the time of travel, so can’t be used to beat the rise.)

Thanks Daniel. Damn, I use Myki money so my only way to beat the price rise is to stock up on 10-trip Metcards (and use Myki for Earlybird trips in Monrning).

I have a myki pass for zone 1 & 2. The last time I topped up, I did it to the Friday of my second last week, with the thought that I may drive to zone 1 and PT from there, or maybe drive in one or two days, with plans of catching up with people or shopping after work.
My only concern with buying a yearly pass is holidays and leave taken during the year. I work my pass purchases to fit around time off and public holidays, as I don’t generally use PT unless I am going to work. How does the cost savings go with 4 weeks off included? Is it still viable?

I would stock up on myki passes, except that they activate as soon as they can, ie if you want to take a week off and ride your bike and use the occasional 2-hourly, tough – the pass activates if another is not already active, instead of figuring out 2x 2hourlies in a week isn’t worth using the pass for!!

Why not have passes activate by a double swipe within 5 seconds or something? As it stands, I’m just going to have to lump the price rise, because unlike metcard, you can’t get proper control of monthly (33-day) activation.

As you know Daniel I cashed in my commuter club from last year and have switched to PT of the two wheeled variety (when it’s not raining). It will interest you to know that so far, taking into account the refund I’ve received and the amount of times I have used public transport since I started riding (which I still do on occasion using myki money) I am only about ten dollars in front at this point in time, even though I have ridden to work about 3 out of 5 days a week since the start of October. The moral of the story is, the closer to the end of your pass you are, the less sense it makes to cash it in. I intend to ride as often as possible though as winter approaches that will probably reduce and I may go back to the 33 day myki pass trick.

But my waisteline is definitely thanking me for it :D

@Dave I agree, my idea of always selects the best fare would include weekly and monthly use.

I was thinking about this on my way to the train this morning. Unfortunately I’ll be heading overseas for a month at the start of February. I think my best bet would be to buy a month pass before the end of December, activate it then buy a 3 month pass, which is what I usually buy. But I’ll have to be careful to make sure I check when the single month pass expires and buy a couple of Metcards to get me through any additional days in between it expiring and me heading overseas.

The only way I can see around the automatically activating passes is to have two mykis. But that kind of defeats the purpose of a single ‘smart’card, no?
Plus now mykis are $10 to acquire, you have to pay for the privilege of doing something that cost no extra under metcard.

The workings I did from where I commute from @ the end of the line (Zone 1+2) it is definitely worthwhile investing in the yearly MYKI pass… if you’ve got the $$$. The commuter clubs available through some employers or PTUA saves you significantly more & covers all your leave etc

^Dave, agreed, two mykis can help with the pass situation. During the initial free offer I ended up getting three (there was no limit) so can easily do that if necessary. I am toying with buying at least one pass now to use when winter approaches and I’m not going to be riding any more, or as often.

I frequently work from home two days a week, so I have always used a 10×2 and the Myki equivilent. I’m actually not working now, so I guess I’m stuck with the rise when it comes in.

However, I wonder what I can for my son who is at Uni. He was travelling everyday, so I used to get him Myki Monthlies, but he is hardly travelling at all, so a 10×2 (or equivilent) is good. But, can I buy a monthly pass now, that I don’t want to activate until next March. If so, how do I stop it from being activated or do I have to do that manually?

@Rae, broadly speaking a Yearly (at the retail price) costs about the same as 11 monthlies. A *Commuter Club* Yearly gets another 10% discount, so it’s roughly the same as 10 monthlies. Buying ahead of the price rise saves you an additional 8.6%, bringing it down to the price of about 9 monthlies.

So yes, even if you’re taking time off during the year, it’s still good value, especially just before a price rise. The tricky bit for most people is finding the money up front.

@Julian, if you do your calculations carefully, you can buy a Myki Pass to cover the precise time before you head overseas. But yes, you’d need to take care not to activate the new Pass too early.

@Dave, yes, correct. (At present the only way of avoiding the $10 fare is to buy a Commuter Club Yearly.)

@PaulK, the only way to avoid a Myki Pass activating is not to use that card in the zone(s) covered by it, eg use another ticket.

I hope PTUA will be pressuring the State Government to spend that extra revenue on public transport projects!

(I work 4 days a week and use a 5xdaily ticket or a 5xweekend ticket, or recently a Myki. (Not sure how to check whether the Myki is doing what I expect!)) I’m in zone 2 – an annual ticket is unaffordable for me.

Daniel do you know how long do we have to use up the metcards?

I stocked up last year and bought about 5 or so 10×2 hours, which is actually one of the reasons I swapped back from myki to metcard. I was more than happy to pay upfront and will most likely do the same this year.

“What, if anything, are the rest of you doing?”

After using PT up to my 32nd birthday, I’ve never been happier! This is great!

As I’m riding 3 or days a week I use Myki money. My plan is to buy a heap of 10 x 2 hour metcards. I did this last year but only bought about 5. Because the price rise is so high this year I’m most likely going to try to buy enough to last me a whole year.

My threshold has just been crossed. Getting a motorbike. Low fuel cost and free parking. ‘Nuff said.