From what I can tell, it’s an update to a survey done in 2005, using the same methodology. This time however they didn’t put out the full breakdown of figures, which is a shame.

I don’t have major arguments with the overall list; I suspect most of the critera are reasonable. Of course, people obviously need to take into account their own preferences and what they consider to be “liveability”. (For me it’s very much about walkability of a neighbourhood; easy non-car access to amenities, which has flow-on effects in less traffic, less concrete jungle, and easier interactions with neighbours and other locals, and also implies some level of usable PT.) 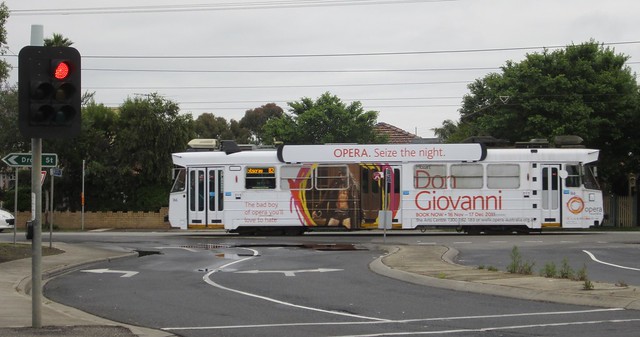 The problem with the scoring

But I need to point out that the survey’s transport scores are not perfect.

You can see this from the description of Toorak, which says that virtually no bus services helped to drag down the score. As the original 2005 articles noted: The study awards a score between 0 and 5 for proximity to train, tram and bus services — giving a total score out of 15.

Proximity to stops does not necessarily mean usable services.

In some extreme cases, a bus route may only operate once a day. Did The Age’s survey give Hawthorn points for this bus stop? 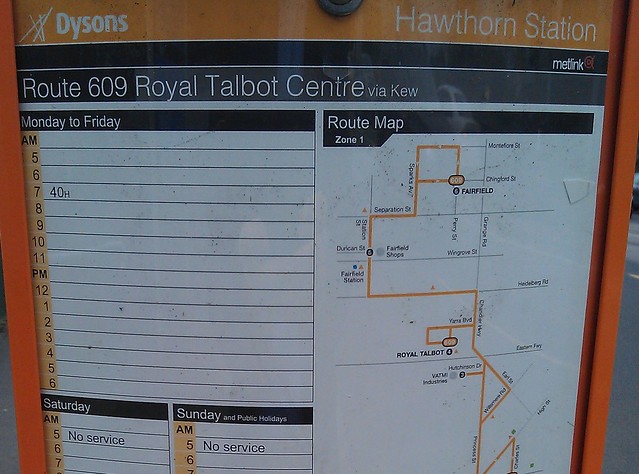 (The answer, as it happens, is no, at least in 2005. Perhaps that route didn’t operate to Hawthorn back then.)

Infrequent buses make services virtually useless for most people, and while individuals may happen to be able to use the service because it coincides with a trip they need to make, at a time they need to make it (or they have no choice, because they can’t/don’t drive), those infrequent services can’t be thought of as enhancing the liveability of a suburb.

In contrast, frequent buses (such as the services Smartbus routes offer, at least on weekdays) are useful to a lot of people, do get plenty of patronage, and do enhance mobility and liveability in a suburb.

As far as the survey goes, this is one of those cases where in public transport, they’ve thought only about the infrastructure, not the quality of service. Service quality was touched-upon in some of the accompanying articles to the 2005 survey:

At weekends they catch trams to the city for shopping or to hang out in restaurants and bars. Even on the weekends there’s no need to check the timetable. “You know there will be a service every 10 minutes or so,” she says. “I just assume that it will be there for me.” — Getting around never a problem

A better measure for a survey like this would be something that tried to quantify not just the proximity to stops, but also the quality of the service in terms of departures per day or week, as well as the variety of destinations served, so as to give an indication of how usable the local public transport is — and preferably in a mode-agnostic manner (though many would argue that trams and trains are more desirable than buses).

Difficult to do, of course, given timetable data is not publicly available. Shame.

(By the way, The Age’s 2011 interactive map isn’t up to much. You can barely tell which area is which, thanks to almost no labels.)

Agreed – although its even more complicated than that. I live in Armadale, and we’re well served by PT in general, but the idea of getting a tram to work in the morning is unthinkable.

a) I can’t get on them, as they’re already packed by the time they get to me (cnr Williams/Malvern)

So, comfort and travel time are also huge factors in a PT score

I agree too. For me personally the service has to be frequent enough to just go to the stop and have a bus/tram/train show up within 10 or 15 minutes to be useful. I don’t like to have to rely on a timetable to travel and of course the service may or may not be on time anyway. Just one skipped over train/tram/bus service on an already infrequent route makes the service unuseable and untrustworthy.

Fortunately I live within a short walking distance to a train station as well as several frequently serviced tram routes and I almost never have a problem getting to where I need to go in a timely manner.

A high proximity to stops also often implies another fault. Meandering buses that ignore arterial roads in order to increase the coverage map as much as possible. This logic of course ignores that the services will be slow, tedious and uncomfortable instead of somewhat direct, and far quicker.

@ Julian – point made with the meandering Route 609 above! As I’ve stated before, the one near me (runs half hourly until 9 at night – used to run hourly until 6) takes 25 minutes to get to Dandenong station – around a 10 minute journey by car! However you get to ‘enjoy’ the scenery of Mulgrave, Dandenong North and so on …

Personally speaking a more meaningful choice would be to walk the 5 minutes to Jacksons Road and catch a direct service following the main north south route Jacksosns/Elonera/Chandler Roads then Railway Parade via Yarraman station to Dandenong!

Its not a “fault”, to go where your users want to go, if your user market is pensioners and cripples.

Anyone in a hurry would be driving.

Unfortunately the bus market will remain ‘students, pensioners and desperates’ (a quote from the Oakleigh Ventura depot, not me!) operating like that!