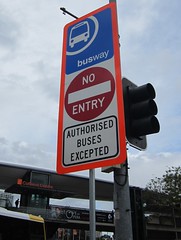 A lot of people express a preference of trains over buses. I suspect it’s mostly about ride quality. Railed vehicles are generally going to be smoother than tyred vehicles. And there’s also perception of permanence (and in Melbourne, perception of service quality, since trains and trams all run until midnight every day, whereas buses are somewhat patchy).

In the theoretical world of public transport planning, it comes down to the capacity and speed required. Trunk routes needing to carry thousands of people per hour need to have high-capacity vehicles, and once you get over about 200 people in a single vehicle, you pretty much have to go to rail.

But rail is expensive, and so you’re never going to get it everywhere. Many parts of Melbourne will never have rail, which is why it’s vital to provide some other mode into those areas, running high quality (frequent) services.

For buses and trams, another aspect to consider is right-of-way. Do the vehicles run in mixed street traffic, or a dedicated lane on an existing street, or a completely separate right-of-way? Buses and trams can run in any of these; heavy rail can only operate effectively on the latter.

One of the notable things about Brisbane is that in recent years they’ve invested in busways… effectively bus-only freeways — known as Bus Rapid Transit in PT planning circles. The result is relatively low-capacity services (conventional or bendy buses), that run quite fast on the busways (since they have no other traffic to deal with except other buses). 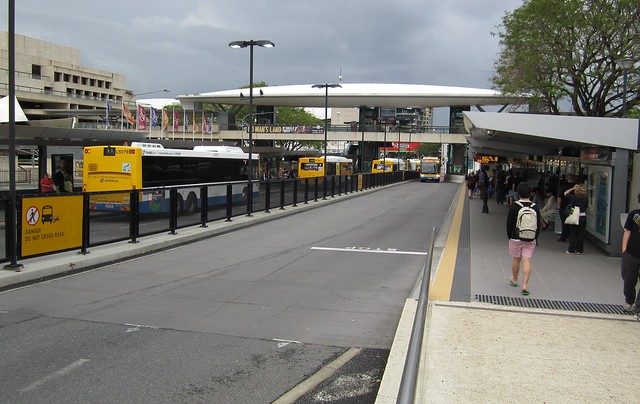 They can run at high frequency, and in spots where they need to, they can operate on normal streets. In Brisbane’s case, some routes operate on the street in the CBD, and also at the outer suburban ends, using the busway in between.

Melbourne’s only comparable routes are the freeway buses to Doncaster and Altona, but these don’t have separate lanes (just part time bus lanes in some sections).

There are two major catches to busways: firstly they’re quite expensive to build. One recent one kilometre stretch cost $465 million — more expensive per kilometre than Melbourne’s $562 million 3.5 kilometre South Morang rail project (only a portion of which was the actual rail extension). No doubt part of the huge cost is due to Brisbane’s primarily being in the inner-city, thus involving lots of bridges and tunnels — if one compared like-for-like then in theory the busways should be cheaper than rail.

The second catch is that they have limited capacity. Brisbane’s are becoming so popular that now they’re hitting the capacity limits — of the buses and of the busways.

We saw this while in Brisbane, at the Cultural Centre station. These buses are heading out of the city at evening peak. 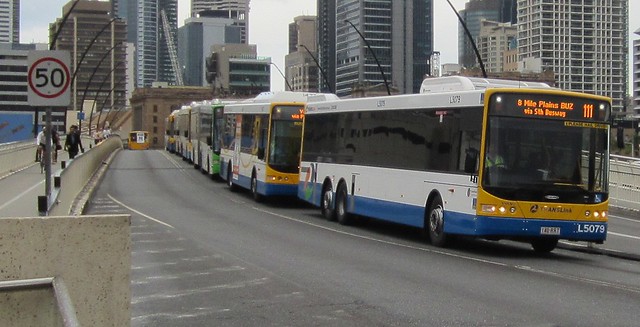 It must be really frustrating to be stuck in a bus queue like that — both for passengers and drivers. And because of the fencing on one side of the bus way, and traffic lanes on the other side, if things got really jammed up, it might not be possible for passengers to abandon the bus and walk (which is what tram passengers do when St Kilda Road jams up).

Capacity also becomes a problem with regard to storage. This also happens for trains of course — all the vehicles used at peak hour need to be stored somewhere.

The number of drivers involved also needs considering. A single six-carriage train might carry the equivalent of about 10-12 conventional bus loads of people, but with only a single driver. This is the debate at present over some rail corridors such as Doncaster in Melbourne. The current buses provide high frequencies, but require a lot of labour to do it. Trains could move as many people and more, using less labour, but would the resultant frequencies be high enough to attract passengers?

They can of course replace single buses with bendy buses to get more people per vehicle (and also carry more people per driver), but there’s going to be a limit to what they can do, and I do wonder if in Brisbane should have saved the buses for being suburban feeder services into an expanded heavy rail (or light rail) network instead. (To be fair, they are expanding the rail network too.)

The bottom line here is that good effective planning is needed to anticipate the current and future capacity required, the transport mode needs to be chosen appropriately.

Yep, in terms of peak period travel to the city, trains are much faster, generally don’t get stuck in traffic, and you (the passenger) don’t have to find (or pay for) parking at the end.
But trains are also costly to run and require a lot more staff than just one driver per train load of passengers.
Unfortunately, politicians’ time horizon is only as far as the next election, so long term planning becomes someone else’s problem. Keep lobbying Daniel!

Were the Brisbane busways so expensive because they built entirely new paths for them rather than take an existing public road lane away from private vehicles?

Also, they could presumably throw some rails into the busway and start running 60m+ trams on core routes if they needed to, and still have buses use the same roadway for lighter routes.

While it looks bad in the photo, I expect Sydney’s buses are even worse. I’ve heard some of the times it can take to travel from the north to the south of the city and it is obscene. At least in Brisbane, there are some reservations that can be used for rail in the future.

One would hope they built them to cater for future rail; don’t know for sure though. The question would be whether the patronage from lots of bus routes (which branch out at the suburban ends and serve lots of different places) translates into higher-capacity light rail vehicles confined to just the bus/tramway.

The question would be whether the patronage from lots of bus routes (which branch out at the suburban ends and serve lots of different places) translates into higher-capacity light rail vehicles confined to just the bus/tramway.

If well planned timetables and interchange facilities were implemented there is no reason why the buses couldn’t continue to facilitate the same area, whilst having the advantage of reducing congestion along the busways which were converted to rail or light rail.

The answer is O-bahn

Could be forgiven for thinking the last pic is a row of trolley buses. Until you look at the poles on the left and/or the picture above. :)

Strangely enough in Brisbane, the core Busway routes actually operate at a higher average speed than the parallel heavy rail. Primarily due to fewer stops. They also run articulated buses on the busiest routes, and in reality the limiting factor is platform length, not vehicle length.

There’s one clear bottleneck in the system, and that’s the photographed cultural centre station, as buses need to cross two intersections immediately south of it. In other areas there are passing lanes (not seen with rail, certainly not at those short headways). This actually means that the throughput of the buses already exceeds that of tram style light rail. As non-stop express routes bypass the most congested stations, and in some sections even leave one busway, shortcut across a freeway road bridge, and return to a second busway (bypassing the cultural centre bottleneck.)

Amazingly when it was originally built, that cultural centre station only had one lane (no passing lane) to allow for side by side light rail. At that stage a bus was passing though it every 27 seconds in peak, so they had to add the second lane. It was somewhat of a moment of realisation that the busway was already exceeding the capacity of the proposed light rail. And for about 1/6th the cost.

The plus of the busway system is that services can bypass breakdowns (very rare) or accidents (again, pretty rare). They’re not fixed to tracks, and the majority of outer suburban services are run by different operators (but all with the same ticketing).

They did build the busways to be able to take light rail, but you’ll need a very high capacity light rail system to match it. And then you need to deal with the fact that an extra change of mode is required, which is a massive disincentive. In some cases there are bus services that would require three connections (onto, off and then onto, and off again another busway), to replace the current single bus route.

The $465million one km stretch includes an interchange with another busway, and two major stations (more substantial stations than any of Brisbane’s suburban heavy rail stations.).

So it’s not $465million per km of busway itself.

Also one of the downsides of higher capacity vehicles is the reduced capacity. Despite buses arriving around two a minute, you can still wait 15 minutes for some services that go to where you need to go. When the south east busway originally opened, the stop at the terminus only had buses every 15 minutes. 6-12 months later they tripled that to every 5 minutes due to crowding, and almost instantly patronage tripled (throw away your timetable, 5 minutes means you don’t need one). They then started adding express services to the point that it became much faster than either driving and cut more than 15 minutes off the equivalent heavy rail journey !