Maybe after tomorrow, this could be the new Yarra Trams logo? 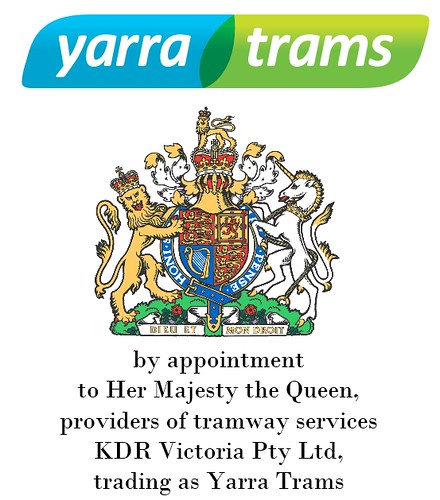 Update Wednesday 6:30pm: There you go, here’s my best pic of the Queen in the tram. Not great I know; she was on the opposite side and facing the other way. 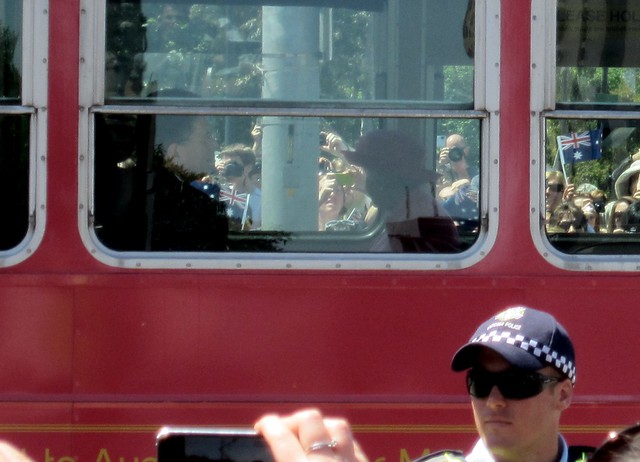 Lots of pics at The Age and Herald Sun.

Most amusing: Channel 9 had footage that showed during the Queen’s ride, the royal tram got a Fleet Operations PA message about diverted services.

Update Thursday morning: A better view of the Royal Tram… 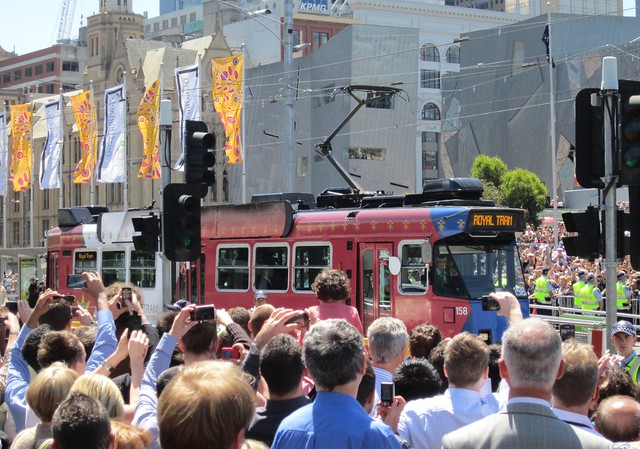 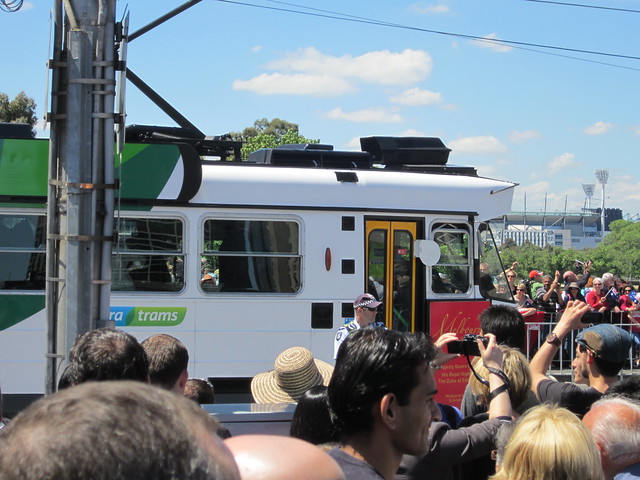 (There was a second backup in the Royal colours prepared, but I didn’t see that.)

See also: Why a Z-class tram was used for the Queen’s visit

10 replies on “Yarra Trams – by appointment”

So surely it should have the Australian coat of arms, or the Victorian arms. (Considering it is her Majesty in right of Victoria which controls the contracts, her Majesty’s arms in right of Victoria would be the appropriate ones to my mind, but most people seem to have given up on federalism… sigh… Most things the federal government has taken over have either failed to make gains compared to other countries, or got worse; so I don’t understand it. But that is not a relevant concern.)

To that end, I present my version of the “logo”:

Daniel, I think you’re taking your blog-readers for a ride.
(But I like the logo idea!)

not that I care overly much, but I noted that in The Age’s coverage there appeared to be at least two Royal Trams –

and as a colleague pointed out – she may be Royal, but they still made her climb the [email protected]#[email protected] steps … surely they could have run a low floor model … even if they’re German …

Daniel, is there a reason this particular tram was used (i.e. does it have some historical significance), and not a modern, low floor one?

@LJ, the ABC story I linked to said the Palace chose which model. On the bright side, it means maybe the mainstream have figured out what a Z-class looks like!

I’m curious if they installed a metcard machine on the tram when the renovated it. I’ve seen the fleet slowly getting the new upholstery etc, I think an A Class was the first one I noticed on Route 48.

@Nathan, these changes don’t go as far as moving stuff around or removing machines. It’s more a makeover (new seat cushions and new paint and stickers) than a renovation. http://www.yarratrams.com.au/Portaldata/1/Resources/pdf_document/Your_new_look_Yarra_Trams.pdf

I read somewhere (I thought it was here?) that last time she was here, she rode a Z class and she wanted to ride the same model of tram again.

@Alexander, as far as I know, the Queen of Australia ( or the states of Australia ), does not do that “by appointment” stuff because she doesn’t have a household here and doesn’t buy cigars or mineral waters or pheasant pies or shooting brakes here.