We started off with a walk around Brisbane’s CBD, heading down and around Queen Street Mall to look around the shops (nothing staggeringly surprising). Being the PT geek that I am, I guided us down into one of the underground bus stops I’d encountered on my only previous visit to Brisbane in 1988, when they must have been relatively new. Back then I seem to recall the routes were named after native animals — these days they seem to prefer the more conventional (and arguably more memorable) numbers. 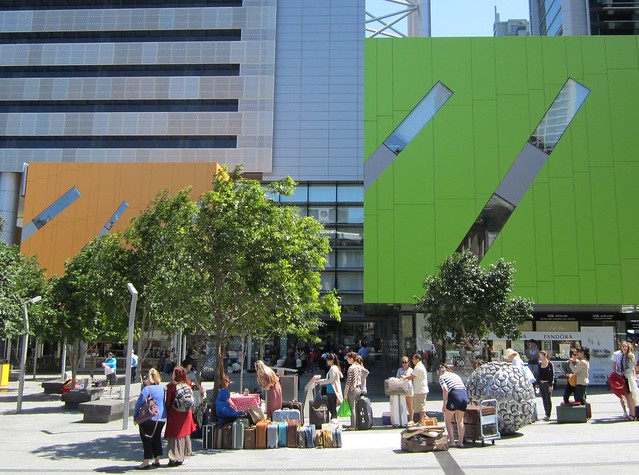 At the end of Queen Street we found Reddacliff Place, which in some ways resembled Federation Square — complete with neighbouring garish-looking building. A lot of people appeared to be queuing up with suitcases, which I thought was slightly bizarre. Some kind of flashmob or cooperative art performance perhaps?

We also encountered some pretty cool street art, including some metal kangaroos. A block from Queen Street we found a Timezone arcade — remember when there were heaps of these? Towards the river we found a market, including a farmer’s stall with $5 for two enormous punnets of strawberries. Yum. 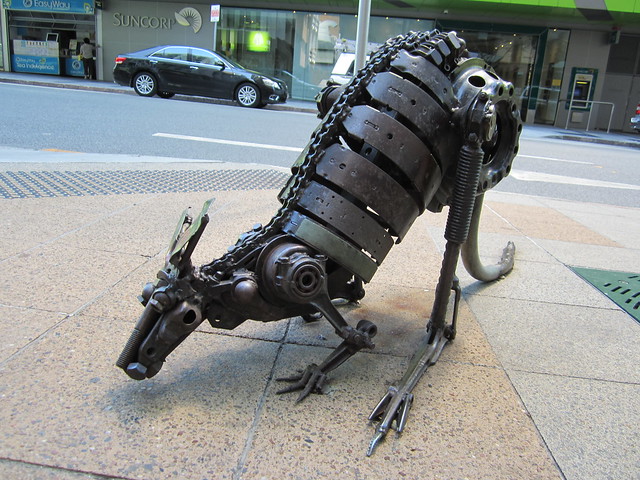 By this point my sister and her family had arrived in town, and we met up and headed to our apartment and made and ate sandwiches for lunch, then headed out for the afternoon.

Our destination: the Brisbane tramway museum. It’s only open on Sunday, so it was now or never. Back to Central station, where my sister bought train tickets (discovering that you can only buy single tickets, not daily/returns), while my brood used our Go Cards for the first time.

We boarded the train for Ferny Grove, and found it wasn’t packed like Melbourne’s weekend trains increasingly are, but it certainly wasn’t empty either. During the course of the trip, we never got to take a peak-hour ride, but Robert Dow tells me crowding is a problem at those times, and it’s not helped by services only being every half-hour outside the peaks, preventing the kind of load spread into shoulder-peak and off-peak that we see in Melbourne.

Arriving at Ferny Grove, we found the station in the midst of an upgrade, and had to walk the long way round to head to the tramway museum. All up it was about a 10ish minute walk, and when we eventually arrived, we got to ride a variety of trams, though unlike Bendigo and Sydney, they didn’t have a workshop you can look around inside. 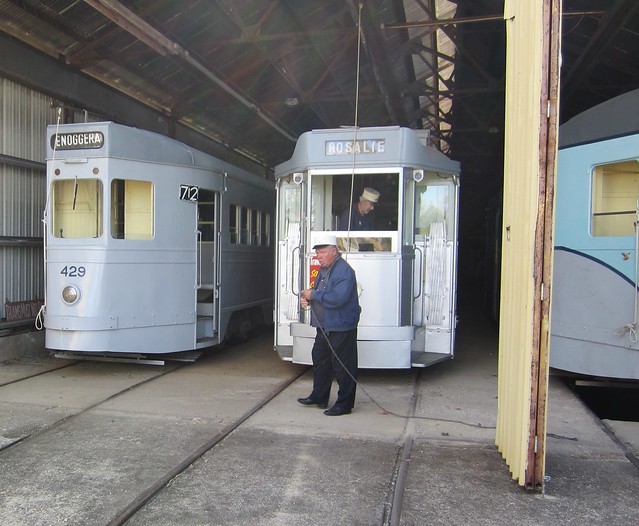 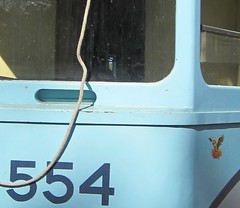 The staff were in the legionaire-like uniforms, and they told us the story of the different classes of tram, including the Phoenix class, famous for having risen out of the ashes of the great depot fire of 1962, and only being run for a few years before the entire tram system was shut down in 1969.

I didn’t hear them refer to him, but the closure of Brisbane’s trams was (apparently) largely the work of Clem Jones, then Lord Mayor of Brisbane, who strongly believed working families should be able to all own and drive their cars, unimpeded by trams, and dismantled the network, replacing them with buses. To this day there are no trams in Brisbane apart from in the museum, though the Gold Coast is building a light rail line.

I assume he was behind the Riverside Expressway alongside one side of the Brisbane River — a stark contrast to the pedestrianised and much more friendly Southbank. The Clem Jones tunnel aka the Clem7 is named after him, and it’s with some glee that tram lovers point out that the tunnel is in dire financial straits. 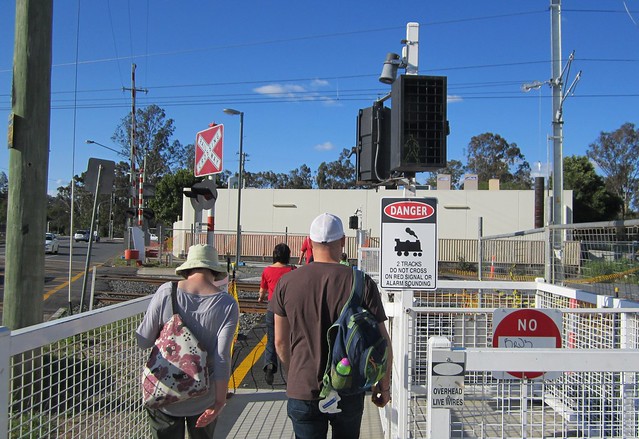 After the museum we headed back to the station, via a servo to buy some icecreams. My sister once again struggled with the station ticket machines, with me convincing her at that point that she should obtain Go Cards for the rest of their holiday (which would involve some bus rides around Brisbane and heading to Surfers Paradise the next day, as well as a further buses around the Gold Coast), given paper ticket costs of $5.40 each way versus Go Card fares of $3.68 meant the $5 (refundable) cost of the card would have almost paid for itself on the trip to Ferny Grove alone.

Back at their serviced apartment (which was a block from ours — they’d tried to book in the same building, but couldn’t) and we ordered pizza from the very fine Pizza Capers for dinner.

Then we headed back to our own apartment, with a quick detour up to the nearby Fortitude Valley to have a look around and check out possible restaurants for another night. Naturally the spotting of a restaurant called Bow Thai resulted in cries of “Bow Thais are cool!”

There’s a “Beau Thai” in Malvern!

… and a Thai Nee restaurant in Lygon St, Brunswick East … and a Birdie Num Nums, off topic, but interesting nonetheless … :)