It’s probably almost inevitable that when leaving on an interstate holiday, you will head for the airport and reach the point of no return before remembering some vital thing you’ve left behind. In my case, it was medication — sitting on the bedside table at home — which is prescription-only and for which I didn’t have the paperwork. Happily I was able to convince my sister to bring it for me, as she and her family were heading up to Queensland a day after us.

Other than that the trip to the airport was uneventful — train to Southern Cross and Skybus as usual. It may not be as cheap as the train/Smartbus combo via Broadmeadows, but it’s frequent, quick from the city and doesn’t drop you in the boondocks at the airport. In fact the Skybus was as popular as ever, with virtually all seats taken.

We met Marita at the airport, and checked-in at the automatic kiosk thingy, failing to comprehend the full meaning of the warning about emergency rows. I assumed it meant just two of us would be in the emergency row, but in fact it meant it wanted to put all four of us in the emergency rows, and this is a No No according to CASA, who want all occupants of emergency rows to be over fifteen. Fair enough, but I suspect Qantas need to make the booking kiosk text clearer on this point.

This caused some disruption as we boarded, with the gate staff swapping us to different seats, but we still departed the gate more-or-less on time… which was where the punctuality ended, as the poor weather and a terminal security breach earlier in the morning had caused a queue of planes for take-off. I could see them all in a row in front of us, and it took about an hour to actually get airborne.

On the flight, which had personalised screens for every seat, I watched the movie Source Code, which was quite good (though rather far-fetched), and a couple of episodes of Parks And Recreation, which was very funny. (Though I was slightly miffed by a character claiming a loud noise was setting off her cluster headache — that’s not how they happen.)

Despite being a scheduled 11am-1pm flight, there was no lunch served — thanks Mr Qantas — just a fruit cake and an optional apple — which I took, thanks very much. 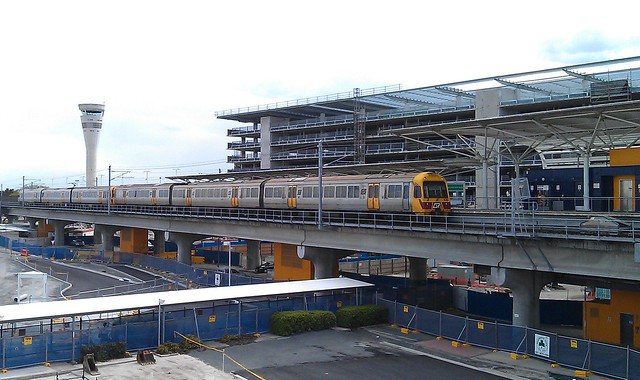 We flew into Brisbane about an hour late. Fortunately the checked bags turned up pretty quickly, and we collected our pre-booked Airtrain tickets and made it to the platform with five minutes to spare — unlike Skybus, it only runs every half-hour. (More about Airtrain vs Skybus in another post in the near future.)

Twenty-five-ish minutes later we were stepping off the train at Central, and despite taking the wrong exit out of the station, found the hotel without any trouble.

I say hotel, but I mean serviced apartments: The Republic Apartments in Turbot Street. I assumed the street name was some sort of sophisticated silent-trailing-T name, pronounced Turbo, but my uncle reckoned it was the rather more conventional-sounding Turr-butt.

The check-in desk had a pleasant surprise for us: we’d been upgraded from a two-bedroom apartment to a three-bedroom, complete with en suite for the adults, and on the very top floor of the building, providing rather splendid views. 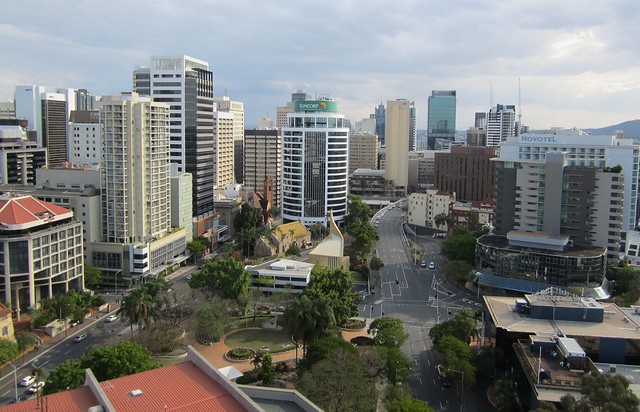 By this point it was almost 4pm, and we were pretty hungry, and went out to find some lunch. A noodle place was open across the road, and we devoured some food, then bought some supplies from the Woolworths in the Spring Hill shopping centre, next to the apartments.

I made a mental note of the Woolworths’ curious and slightly restrictive hours: until 5:30pm Saturdays, 6pm Sundays, and 9pm weekdays — a far cry from the usual midnight closing times back in Melbourne, but not impossible to work with.

After a little TV (including the penultimate Doctor Who of this season) and a quick dinner (roast chicken, potato and salad from the supermarket) we had a walk down to the riverfront, snapping pictures of passing ferries and the very impressive Story Bridge… though actually I think it looks more impressive in the daytime: 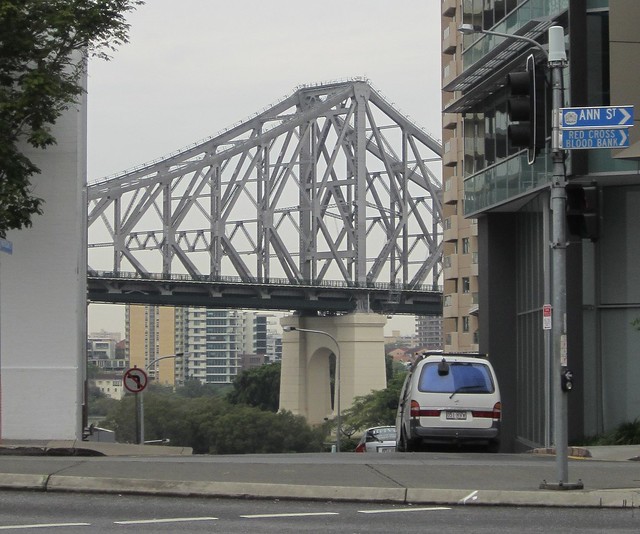 Then we headed back to the hotel to watch Big Bang Theory and/or The Simpsons… I can’t actually remember which, but found during our stay that the two are almost interchangeable — when you have Fox8 and the Comedy Channel as well as Channel 9 and Go in a hotel room, one or the other is almost always on… before heading for bed and a well-earned sleep.

The trouble with the apartment upgrade is that if you go back to Brisbane, nothing will do but the upgraded apartment.

I had no idea that they had restrictions for the emergency exits – no wonder we never get those seats when Sapphire (aged 12) travels with us.

And I *HATE* that Qantas now gives you a freezing cold, rock hard muffin and an apple during what is obviously lunch time and ditto for dinner. I remember when we came back from Brisbane to Adelaide on a four hour flight that ranged from 5.30 to 8.30pm (allowing for time zones) and we got a cookie! Quite a few folk were pretty miffed….

Brissie’s a nice place – I’m assuming that you did a River cruise and headed up to at least one of the ‘worlds’ by bus?

Maybe things have changed but flying during business “city flyer” peak times with Qantas gets you a reasonable meal and as many little bottles of free wine or cans of beer/drinks that you want before you start to descend.

Maybe travellers at other times are not seen to be as lucrative to the corporation.

I’ve been told by the cabin staff that it’s only a matter of time before all flight services are discontinued, and as we are a captured market (forget domestic competition) we will soon all be flying in cattle class.