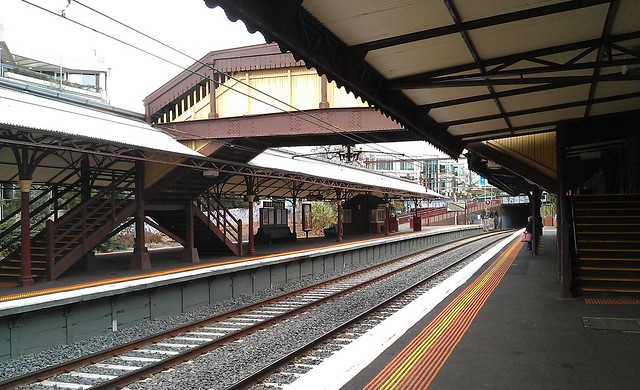 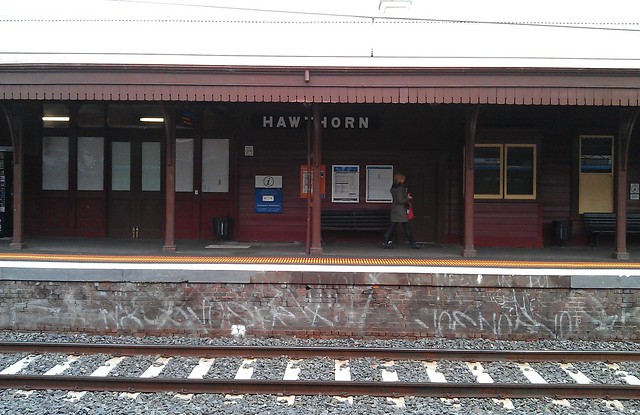 When I finally moved out of home, it was to Hawthorn. Initially I was still working in Burwood East, and the commute was an easy tram ride, from the flat we rented which was midway between there and the city — which became useful once work moved into town. Cutting through the back streets, it was about a 6-7 minute walk to the station (ditto at the other end to work in Collins Street).

If there was a big gap in the trains (as there often was just after 6pm when coming home) the 70 tram was almost as quick as the train.

The commute got a tad more complex when I changed jobs to St Kilda Road, and met the perils of the peak hour St Kilda Road tram crush — yes, even back then.

To the untrained eye, Hawthorn has changed very little since then. You see it in television adverts every now and again, and I’m not surprised to see it’s heritage listed. 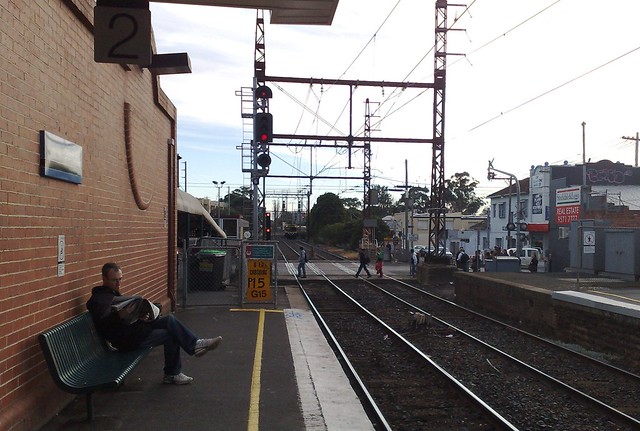 Moving into a flat in Booran Road, Glen Huntly, and living without a car meant it was a mix of tram and train travel. The usual work trip became either a tram ride on the 67 into St Kilda Road, or a train to South Yarra then a walk along Toorak Road (which was often faster than the cars) and across Fawkner Park, which was nice at least on a sunny day.

Later jobs changed that, and for a while I was catching the train to Richmond, changing onto a train to Box Hill, then a bus to Doncaster… which is what finally prompted the purchase of a car. After that was a job in Brighton, which sometimes involved driving, and other times involved a tram to Elsternwick then a train to North Brighton.

Most of my jobs since then have been in the CBD, so I’ve been a daily Frankston line commuter since about 2001.

Glenhuntly station (which unlike the official suburb name, does not have a space in it) hasn’t changed much over that time (though I recall earlier visits in the 80s when it still had railway gates instead of booms, pre third track).

Initially there was a booking office lady who could sell tickets very fast when a train was approaching — but at times there was nobody present, and no way to buy a ticket. For a short time she wore a bright jacket and was showing people how to use Metcard, and then she was gone, leaving only the machines.

A coffee shop installed itself into the booking office at one stage, but then disappeared again. Nowadays there are station hosts present during morning peak only.

I’ve written before about how the services through the station changed very little in the time I used it, while the operators changed from The Met/PTC to Bayside Trains to M>Train to Connex, then to Metro. It’s only in the past year or so that the timetables had a thorough re-write.

Even though I moved out of Glen Huntly in 2003, I continued to use the station until 2009, because the kids went to school nearby, and it was generally the easiest station to use as part of the school run. As a result, even though the car park is full by about 8am, I got to know the best all-day street parking spots nearby. It’s not really that hard as long as you’re prepared for a five minute walk.

Tomorrow I’m of to Tokyo and back, most of the way on the shinkansen (bullet train). I’m going to take the local line to he next ‘shink’ station to enjoy the rural line and save a few Yen, but on the way back it’s the shink all the way. It’s a long weekend coming up and Friday night is a beast. I went to the station last night where I could use the (English friendly) machine to book my ticket, select my train time, carriage and seat! Down in Tokyo it’s a spin round the circular Yamanote line for business in Ebisu, and after that it’ll be up to Akihabara for some technology overload before heading back to the rural life and rice fields!

My commuting history has a very slight overlap with yours, Daniel, although it’s unlikely that we ever shared a train because it seems we were always travelling in opposite directions. In the late 1980s and early 1990s, you would have been exiting Caulfield station on your way to university while I was entering it on my way to work in Parkville. Similarly for 1993 in Burwood. I’d walk the 1.5km downhill to Burwood station in the morning, but in the evening, rather than slog uphill from Burwood, I’d go to Ashburton instead. The walk home was still about 1.5km, but more or less flat instead of uphill.

In spite of the fact that few of the stations you mentioned have been my regulars, this has been a delightful series of posts. It takes me right back to my childhood. As I’ve mentioned before, I grew up in a family without a car, and we rarely went anywhere as a family. Friends and relatives tended to visit us rather than the other way round. So I considered the train to be my passport to all the exciting places I otherwise couldn’t get to.

I knew almost nothing about what each place was actually like, so my only criterion was how the name sounded. I would pore over the street directory, tracing the railway lines with my finger, rolling those splendid station names off my tongue, and wondering what the suburbs were like. Bal-a-cla-va. Mor-di-all-oc. Ja-ca-na. Nun-a-wad-ing. Ka-na-nook. Werr-i-bee. And from the age of about 8 or 9, I’d hop on a train and go find out.

I find it amusing in hindsight that I can’t recall ever going to Sandringham or Hampton or Williamstown. Those names sounded smug and bloated to my 8-year-old self. I much preferred stations with exotic names.

Sometimes I could persuade my brother to go with me if the destination promised to be really good (e.g. St Kilda, because of Luna Park), but usually I went alone. People are alarmed today when I tell them that, but it was commonplace back then for kids to roam around on their own and only come home at teatime when they were hungry.

Some may think this childhood railway journeying was all rather pointless, but it meant that I acquired two very valuable skills. It gave me confidence in buying tickets, reading maps, and asking questions of authority figures (stationmasters and the like) at a very young age, and it meant that as an adult, I know how to get to almost any station in Melbourne without needing to consult a map.

Although the last few posts are about Melbourne rail and therefore not familiar to a Sydneysider, Bonnie’s reference to train travel as a child stirred some memories. In the seventies you could buy a “child excursion” ticket for 40c which would allow you to travel all day on Sydney trains and ferries. Like Bonnie I had a great time exploring the city and surrounding area for many years.

It’s a pity that it’s unthinkable for children to travel this way now. I think the dangers are more perception than reality.

This has made me think of my own commuting history: Clayton, Dandenong, Huntingdale, Camberwell, Museum, Malvern, Caulfield, Hughesdale, Oakleigh, Clayton again, Toorak, South Yarra. There are also stations that I don’t use daily or even weekly, but are near my dentist or a particular shop, for example, Canterbury, Carnegie, Armadale, Hawthorn, Richmond . Then sometimes I need to use a new station I’ve not encountered before eg. Mont Albert, Footscray, Elsternwick.
I didn’t live in the city as a child so had no opportunity to use the trains on my own, as my mother had done in the 1950’s, but just this morning my young teenage children caught the train a couple of stations down the line to carry out an errand of their own.

Living in Royal Avenue, Glen Huntly, in the 70’s I used the old wooden footbridge over the tracks to get to the city side platform (only two tracks) each day.
I slipped on the steps one frosty morning and was assisted by two schoolboys, who called me ‘sir’
That was my first “am I getting older?” moment!