PayAsYouDrive… whipped through the form, and it came up with $426.50 for the minimum 5000 kms per year of driving. A more conservative 7000 kms came back as $477.80. So they’re out. (By the way, their web site has improved since the problems I had with it in 2009, which at the time prompted them to respond on my blog. But it doesn’t appear to cater for anything other than a policy starting today, even though I was already currently insured. Odd.)

Youi. Asked for a mobile number to send me a PIN. Annoying, but they say it’s to prevent robots getting into their system. Not sure I believe that, but ok, I went through web form, got to the end and…

…it announced I’m a “preferred customer”, and, without giving me the option: one of our highly skilled advisors is busy calling you right now to finalise your quote.

Sure enough the guy rang up a minute later.

I was cranky. I didn’t want a phone call. I hate making phone calls about insurance, and I don’t have the time. That’s why I used the web site. Heck, this type of transaction is what web sites are made for.

I told the guy so, and asked him to pass that on to his management, and I reluctantly agreed to have him ring back later. (5-6 minutes on the phone, he promised.) After all, perhaps it would be cheaper than Bingle… though it would need to be a significant amount to overcome the inconvenience of the phone call, and the deceptive web site.

You know what Youi, you’re not getting off to a good start on the whole customer-relationship front. If I’d wanted to discuss it on the phone, I would have clicked the “Quote by phone” button instead of the “Quote online” button. 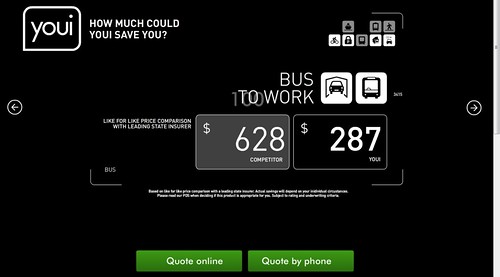 So anyway, I took the subsequent call. The bloke was polite, quick and professional, but the questions included nothing they couldn’t have asked online.

Except this: he asked who I was currently with, and what their premium was. He said Bingle is a hard one to compete with, and Youi’s cover is better, with more benefits (which may well be true, but what do I care if I have never ever claimed, and drive so little that, touch wood, I’ll never have to?)…

Here’s the kicker: He said that the best premium they could offer me is $466.85.

Yes, after all that, after wasting my time with an unwanted phone call, Youi was $91.75 higher than Bingle.

I think at this point you can guess who’s getting my money.

have you tried Coles Car Insurance? There was a story on them on ACA or Today/Tonight or something, and when I checked, Hubby’s car was WAY more expensive, but mine would have been WAY cheaper than what we’re currently paying. I haven’t switched yet, but still… (NAYY…)

Thanks for the quick overview of your experience. I’ve been streamlining some of my on going fixed costs like insurance – did health insurance already this week (now saving ~$1000 per annum). Looking forward to car and home insurance today.

I’ve been with PayAsYouDrive for a few years now and during that time my car was involved in a car accident. They handled everything very easily and I was pleased as punch. The major downside in dealing with them is whenever you call you’ll be on hold waiting for an operator. It really annoys me. I think the quickest I’ve had a call answered is ~17mins and the worse was 48mins. I’ve found its best to call early morning and definitely not 5pm+.

An ad for Youi just popped up in your banner ad. Ouch.
http://twitpic.com/643ivj/full

I found the Australia Post car insurance (who knew!) quite cheap compared to the others, I had to make a claim a while back and it was very straightforward, I got my choice of repairer etc. Will quote Bingle next time too though, since I don’t drive much.

I quit Youi because I grew tired (very quickly) of their smart-arse attitude. I also discovered some problems with their level of cover. I can’t remember what the problems were, but I was happy to pay about $80 more per year to a real insurance company and be rid of Youi.

When I compared Youi for our cars I found them to be dearer that AMMI and RACV. And I objected to all the [email protected] they ask you about on the online form

@Jen, I did look at Coles a few weeks ago. For me it was higher than Bingle. In fact I’ve just checked again, and (kudos to them for giving an estimated premium with only a few questions) it comes out at $521.

@Roger, it’s a 2000 Holden Astra. I’ve been with Bingle for 2 years now, so some discounts for continuity might be applying.

@Dave, AusPost… interesting, I didn’t know they offered insurance. In Google Chrome I got as far as choosing my car make and year, but it wouldn’t let me choose which model. So I tried starting IE instead, but it gave me a “Session ended” error, and refused to allow me to continue, asking me to ring up instead. FAIL.

That would annoy me very, very severely – I am deaf and can’t use my mobile for voice calls with random strangers!

I’m pretty sure than an encounter with a deaf person would lead the juveniles at Youi into a situation they would not be able to handle without causing great offence and breaching anti-discrimination laws!

@mike, yep, and that’s why it appears to be a good choice for me.

As they say on their web site:

“Our customers know they won’t be paying for other people’s bad driving or expensive tastes. So if you’re over 25 with a good driving record and you’re not into modified or flashy cars, then get a Bingle quote and see how much you could save.”