I spent about 4 hours in the roof on Sunday, with an industrial vacuum cleaner from Kennards, trying to clear out some of the residual insulation and other crap from up there. 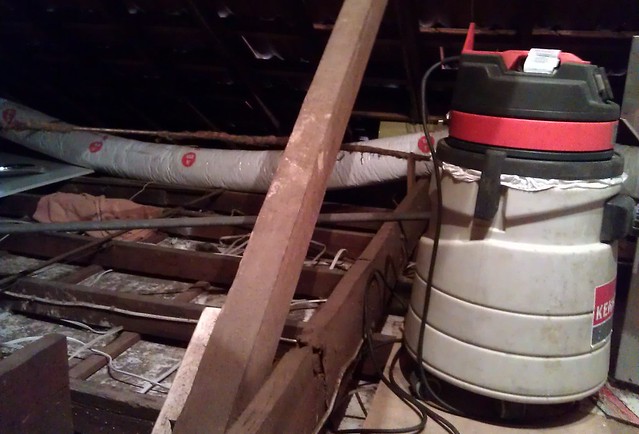 I had thought the half-day hire would be enough, but man, it’s hard work manoeuvring around up there, let alone with a big vacuum cleaner accompanying you. The placement of the heating ducts didn’t make it any easier, nor of course having to scrupulously step on the rafters, rather than putting my foot through the ceiling. Getting into some of the nooks and crannies was really difficult, particularly where the roof meets the ceiling.

Nor making it easier was that the vacuum cleaner’s head didn’t seem to want to detach from the wand, somewhat limiting the flexibility of the unit. I spent much of the time just waving the hose around.

It was quite exhausting, and by the time I had to take the cleaner back (it was $67 for a half-day, which in practice meant not just 4 hours, but 11:30 until 5pm; or $82 for a full 24 hours, but I wouldn’t have had the time or energy to do it) I reckon I would have done about half the roof. I had however concentrated on the worst (dustiest) sections, including the outsides of the ducts themselves.

While up there I also removed any number of bits of junk that had been left behind by others over the years: numerous bits of wire, chunks of roof tile, and a 2 metre-long piece of pipe. There are a lot of other bits of disused pipe which will be somewhat harder to remove, and will require a plumber to be done properly.

The idea is to make it easier for the new insulation to be installed. The carpenter guy I’ve been working with takes the view that the cleaner/tidier the area, the better the job achievable, which is probably fair enough. Given how knackered I was, hopefully it’s now clean enough.

All the effort certainly had one outcome though: I’ve decided no way am I going to install the insulation myself. It’ll be well worth paying the pros to come in and do it properly, and avoid hours of frustrating, exhausting work.

I’ve also learnt that scrabbling around in the roof space exercises muscles which don’t normally get used (and are still sore) and that I’m not very good at spelling vacuum.

7 replies on “Cleaning out the roof”

That machine reminds me of something on Lost in Space or Doctor Who! Whatever: it spells “beware”.

You probably saved quite a bit of money by cleaning your attic yourself. Someone else would probably not take as much time or care to be as through as you would. Is the word “attic” not used in Australia? This is what I call this space/place in a home or building. New insulation will save you plenty of money on your heating bill and you will be cooler in summer too. Adding an attic fan or wind powered “whirlybird” is a good idea to reduce summer attic temperatures even more.

In the photo I can see light coming in between your roof tiles. During a hard wind driven rain does any water or mist spray in from these gaps? In the US roofs have plywood sheathing and tar paper placed under the shingles or roof tiles and the roof is sealed tight from driven rain and snow being blown in.

@Roger, yeah I thought it resembled a small Dalek.

@Jed, I would say that in Australia the term “attic” is really reserved for a roof space that’s usable as a room (or at least storage). Yes there are some small gaps between the tiles; I’m not aware of it causing problems though; I assume the overlap prevents almost all rain coming in.

Can’t spell “I’m” either. It doesn’t come with a leading “I”! Physical labour is tiring, but on the upside, like Jed said, you will have done a more thorough job. And discovered a fair bit about you house too, I’m guessing.

Hi,
Just read your blog as I searched for articles about insulation as my husband works in the industry and found it quiet pleasing to see someone get up in their roof and realise what a hard place it is to work! My husband has been installing insulation for 6 years and I can tell you it is a very difficult, challenging, physical and technical job even though it seems that anyone known as an installer is now considered a low life scum bag who doesn’t know what he is doing because of the wonderful government rebate scheme!
I would advise paying a professional to get the job done for sure, there are alot of requirements to ensure the product works properly and trying to get the insulation into the tight spots in the corners, etc is very difficult if you don’t know what you are doing.
Good luck, would offer to have my hubby do the job for you but we are up in Brisbane!!

Well done Daniel! There’s a LOT to be said for hard yakka, better than the gym & way more productive & rewarding.

I wouldn’t be game to get up in the roof like that, for fear of finding more than just debris and electrocuting myself or something.