Some local railway stations seem to have gained a lot of art in the last few weeks.

Patterson station’s road underpass got a mosaic mural, with local schools contributing to a project devised by Pamela Irving. There’s some quite good pieces: 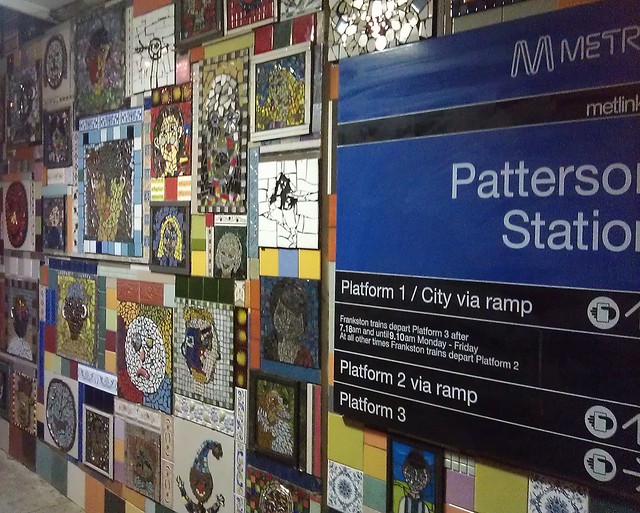 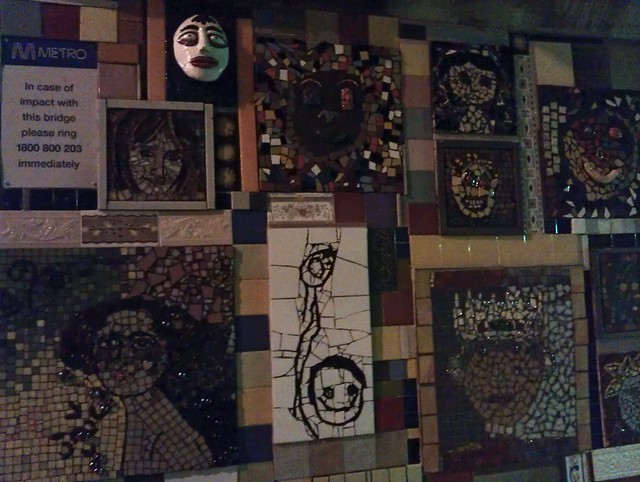 It’s all aimed at improving the look of the station and reducing graffiti.

THE population of Patterson, near Bentleigh, has just risen by 650 and the new faces on the block are staring down the graffiti taggers who make the local station one of the most repeatedly defaced in Melbourne. — The Age 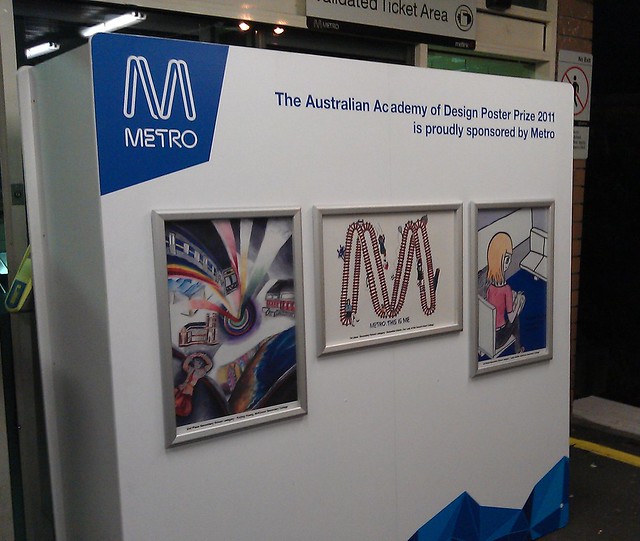 I note that there seems to be a battle of wills going on between some vandals and Metro’s painting crews on the gents’ toilet door at Bentleigh. It must have been painted a dozen times this year. With luck this won’t fall victim to the same people.

It’s no Moscow Metro, but who knows — it might even be found that the costs of installing art works like this is less than the constant re-painting, and it certainly makes these stations more pleasant to look at.

I suspected the gleaming white of the new art installation at Bentleigh put in during school holidays would be too alluring to the local barbarians. Sadly it has already been vandalised. Sometime between 6pm and 8:30am, it was tagged.

Update 8pm. The whole installation at Bentleigh was removed some time today.

I can’t help but think that given the repeated vandalism of other parts of the station, a fresh coat of paint and a few police waiting nearby for the culprits might fix the problem once and for all.

16 replies on “Art on local stations”

I think the artwork at some stations makes a refreshing change to hum-drum commuting. Sometimes a bit wacky (eg Degraves St entrance to Flinder st station), but that makes the journey more interesting.

Interesting isn’t it how the picture on the right isn’t vandalised at all?

This is just so disappointing.

Kinda glad I now live in a country where this isn’t the norm.

I’ve always had zero tolerance for taggers. Jail em and throw away the key. It’s not art it’s just bullshit.

Before scrolling down to read the rest of your post the first thought about artwork on an underpass that came to my mind was “I hope this new artwork won’t be defaced by taggers but some of it probably will be soon “.

Graffiti on our network seems to be a growing problem. Metro definitely aren’t trying as hard to keep it off trains themselves, you see it a lot more than you used to (on the exteriors I mean). Under Connex that rarely happened.

I don’t know what the solution is, I don’t even know what the punishment is for someone caught in the act of defacing public property. Even if they said something extreme like “we’ll cut of the hands of those caught vandalising public property”, they have to catch them first. Unless Ted’s PSO’s are going to be there 24/7, I’m not sure what else can be done. Regular patrols might catch one or two unlucky individuals, but the people who do this aren’t stupid and are probably very good at avoiding getting caught.

As far back as 1967 there was a telling quote in the Doctor Who episode “The Enemy of the World” where the Troughton Doctor said “People spend all their time making nice things and then other people come along and break them”. Now itsn’t *that* the truth?

We had the same in Weston-s-Mare when a lovely collection of colourful donkeys went on display around town and some lasted less than 24 hours…….

On an Australian theme (albeit in Coventry!) there was also this from 26 January 2011:

However, I’m happy to report that the replacement kangaroo on Canley station is still okay and pristine, even if 90% of people have no idea why it’s there. (Still, keeps people like me in a job!)

And don’t know what the solution is but I’m genuinely surprised to hear of this happening in Australia, a society which – to my limited experience – seems to have a much more deeply ingrained sense of community respect than we do. Or no, apparently. :-((

Bentleigh station has the worst public toilets (at least in the mens) probably in all of Greater Melbourne. I unfortunately had to use it a couple of months ago and every single surface was covered in tags, as well as syringes and feaces sitting around in blocked toilets.

Must be a feral element around there. Frankston’s toilets look pristine in comparison.

They left the amateur painting of the sweet, innocent girl alone, ublemished and untouched. Tagged the other two, but they left her alone.

That… that’s quite nice, actually.

One of the things I love about Japan is the respect for public property, stations included. You do see the occasional graffiti and even fewer cases of vandalism – it’s just not part of the culture!

Whilst I’m sure the murals at Patterson station will get defaced from time to time, I’d bet it takes a lot longer than the “Design Poster Prize”.

There is a common belief amongst people engaged in graffiti culture that corporate advertising and corporate art is more offensive than graffiti.

The mural wall has the look and feel of something much more community orientated, which despite some elements, a lot of those engaged in graffiti would respect.

You might be right Julian. The other issue here is that while Bentleigh station is staffed, they positioned the display in an area which is accessible after trains stop running, and not visible from the street. In contrast, some (possibly all?) the Patterson mosaics are on the street, visible to passers-by.

There seems to be a case for survailance cameras, the footage can be viewed after the crime and perhaps culprits identified?

Did you see the letter in The Age a week or two ago defending taggers?

Can’t remember the exact wording, but it was something about how they’re “just attempting to reclaim the space they’re excluded from”. Awww, diddums.

Are we to believe that all taggers are from society’s underclass? That no middle-class kid ever went out armed with a spray can?

People who tag are bored, they have no respect for anyone else’s property, and they don’t care what harm they do. Tagging has about as much justification in terms of social equality, and about as much artistic merit, as a dog peeing on a wall.

At least this art is produced by people with some talent.

I’ve seen people do graffiti on a packed tram with no-one saying anything. Don’t know if they are on drugs or violent so I didn’t want to question them.