Mount Waverley MP Michael Gidley got into a scrap with some ALP campaign workers on Wednesday outside Parliament Station. 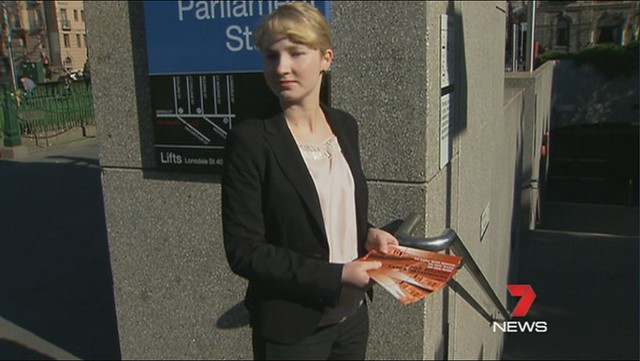 On exiting the station, I received a brochure from an individual.

I then sought advice from authorised officers at the station on the distribution of this information because I do not believe it is appropriate for commuters to be approached in this manner by people distributing this information.

The ALP campaign workers, who work for Shadow Transport Spokesperson Fiona Richardson, claimed he was aggressive towards them, demanding to know their identities. Channel 7 reporter Brendan Donohoe saw the last part of the exchange, and said Gidley was shouting.

Has this guy never been handed a political brochure outside a railway station before? All the parties do it, and provided they weren’t blocking the exit or inside the station itself, he’s being a bit precious. And losing your temper over it certainly isn’t acceptable.

But what’s in the brochure itself? I haven’t been handed one yet, but Andrew got one on Monday outside Melbourne Central, and kindly scanned it for me.

“30.5 million extra passengers.” This is from the budget papers; the total 2011-12 target minus the 2010-11 expected outcome for metropolitan trams, trains and buses.

“No extra train services.” Err well I hate to break it to Labor, but this isn’t right. Metro and the Department of Transport are now on a trajectory of steadily adding services. This would have happened no matter who was in government. A bunch got added in May (though not on all lines, and Fiona Richardson’s Epping line was one that missed out), and more will get added in the next timetable revision.

In fact the same budget paper they got the 30.5 million from also says (on the following page) that train services will be expanded from 19.7 million service kilometres in 2010-11 to 21.0 in 2011-12 — a 6.5% increase (to cover a forecast 7.8% increase in passenger trips — something Labor don’t mention — though note part of it is expected to be off-peak growth, which in some cases can be accommodated on existing services).

“No new trams”. Labor ordered 50 which have yet to start arriving, but this is basically correct. The Coalition hasn’t funded any more.

“No new buses”. Umm well, in just over two weeks, the high-frequency 601 shuttle between Huntingdale and Monash Uni starts, and presumably requires an increase to the bus fleet, so this obviously isn’t true. But it is true that no new Smartbuses or major service expansions (apart from the 601) are currently on the cards.

The flip side re-iterates and expands on these points:

On the point of the new timetable: actually the number of peak-hour loop services didn’t drop. It went up. The biggest change in peak the Glen Waverley line switching to run direct, so 7:01 to 9:00am from Richmond:

The number of direct trains into Flinders Street also went up.

It’s true that the new timetable increased travel times. The loop changes add to some trips, and make others quicker, but there is certainly padding in the timetables which means some trips are at the very least several minutes slower — and I don’t think any trips got quicker due to those types of adjustments.

As for the conclusion, that’s it’s getting worse under the Liberals, well that’s a loaded statement that I think is very difficult to prove.

The Opposition has a vital role to play in ensuring scrutiny on the government. They’re short-selling themselves with this brochure. There are genuine concerns that the government is ignoring, and the pledge for more open government is definitely something that Labor should be making more of.

“The Opposition has a vital role to play in ensuring scrutiny on the government. They’re short-selling themselves with this brochure”

It was silly of the Liberal MP to respond in the way that he did. But it highlights the way the ALP is going about scrutiny of government. They seem to be hell bent on conducting an aggressive campaign on any issue that will get wind in the media. But realistically they are highlighting their failings whilst in office. We are only now starting to understand how much that has cost us Victorians.

Yes it’s a pity that the Liberal MP blew up the way that he did. A much better response would have been to take the brochure politely, then lampoon it during Question Time.

This said, perhaps that would have given Labor the opportunity to respond, by pointing out the massive lack of transparency behind the PTDA (or is it now the VPTDA?) and the fact that it seems likely that the new authority will be little more than a shuffling of the deckchairs of the current DoT mob.

Just some more info on the 601 service to Monash – it will replace the informal system run by Monash Uni since March this year because of absurd numbers of people trying to get from Huntingdale to Monash.

Basically, from my observations as a user, the relevant people were shamed into adding the service by the fact that Monash was paying for its own buses.

Anyway, who wants a fast bus when you could route a train up the lovely, wide median strip of North/Wellington road that was built just for that purpse?

Regardless of the contents of the brochure, Michael Gidley is coming across as someone who is economical with the truth, to say the least.

1. He says he “does not believe it is appropriate for commuters to be approached in this manner by people distributing this information.” Rubbish. All political parties do it. Always have and always will. I look forward to the residents of Glen Waverley coming forward to tell their stories of how Gidley’s campaign staffers offered them brochures in public places during last year’s state election campaign. Or is Gidley the only political candidate who has never, ever had his campaign workers do this? If so – well, it’s amazing he got elected at all, really.

2. He claims he did not raise his voice. At least one independent witness says he did.

3. He claims Metro staff informed him that the actions of the people distributing brochures were unlawful. A Metro spokesperson emphatically denies this, and says that Metro authorised officers told him the people were not on Metro land. I believe the Metro staffer, and the most charitable interpretation I can put on Gidley’s version is that he simply didn’t listen to their answer because it wasn’t the answer he wanted to hear.

So with three distinct points of difference between his version of events and other people’s versions, his credibility wasn’t looking good to begin with, and his Wayne Carey apology in Parliament has just made it worse.

@Julian is spot on. A much smarter response would have been to take the brochure, smile and say “thank you”, and then demolish it line by line in Parliament. Instead, it appears he let his temper get the better of him. He could still have repaired the damage in Parliament by saying something like “My behaviour was inappropriate. I should not have shouted, and I apologise unreservedly. The reason I lost my temper was that I believed the contents of the brochure were false, and I did not want the public to be misled. I still believe the contents are false. Here’s why…”

He’s now looking pretty foolish at best, and at worst… well, make up your own mind.

@Daniel: thanks for your very thoughtful dissection of the brochure.

Good assessment. You are doing a great job keeping all of the bastards honest.

“Anyway, who wants a fast bus when you could route a train up the lovely, wide median strip of North/Wellington road that was built just for that purpose?” ……. before the ban on level crossings.

Hi Daniel, small point – Michael Gidley is the MP for Mount Waverley district (which contains most of Mount Waverley, and Glen Waverley). I think he’s a fool to behave this way, and it’s extremely hypocritical, given that even if he hasn’t personally campaigned at train stations, members of his party certainly have.

Your still from Channel 7 clearly shows this party worker obstructing the entrance, as did Channel 10’s footage. Yet the Belgian waffle man at DeGraves St. was told to move his little cart when it was nowhere near as close as this. And he made waffles.

If Metro knew about this, she should have been fined. If there isn’t a law against standing in the way at station entrances even not on railway land, there should be. Good on the MP for ticking her off, but he might or might not have been more effective had he not raised his voice.

By the way, her second name of Munt is not common, and one wonders whether she is the daughter of Janice Munt, who I had the great pleasure of voting against and out of office in the recent election.

@Francis, that entrance is about 5 metres wide. There is no way that even both of those campaign workers could block a substantial part of it, and the picture (probably re-enacting it for the cameras) clearly shows her behind the wall, not actually in front of the steps.

The Degraves St subway entrance is much narrower, and having used that entrance regularly in the past, it was the waffle man’s customers, not the waffle man himself, who used to block it. Still, they should have come up with some kind of compromise.

Daniel, your point that it could be a re-enactment is a good one, and therefore we can’t tell where she really was from the picture.

But if she was where she is, she definitely is obstructing the pick-up point on the bannister. You or I might go barrelling down the middle of the steps, but a frail or unsteady person will make a beeline for the bannister, and being able to get to it two or three steps down the flight isn’t the same.

On further thought, the Melbourne City Council is probably the relevant authority.