Jeremy noticed that when there are stories on the TV news about the Simon Overland/Sir Ken Jones senior police controversy, often stock footage of the two of them in front of a doughnut shop seems to get used. It got a run again last night. 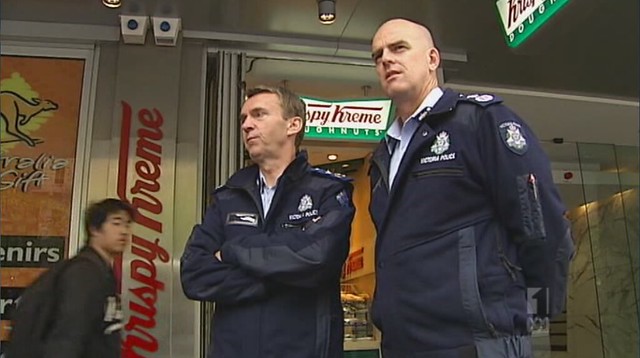 It seems to have almost become the equivalent of the Myki machine falling apart footage.

This web site (which may or may not be authoritative) offers some interesting theories on how the cliché developed:

My understanding about the cops/donuts stereotype is that the donuts were largely incidental.

The bigger factor was that ‘back in the day’, donut shops were the only places open all night where the cops could get COFFEE.

PS. I also meant to say, the stereotype appears to have started in the USA and spread to elsewhere. After all, doughnut shops are not actually very common in most countries.

5 replies on “The police/doughnut cliché”

Might apply in the US, but doughnut places certainly weren’t open all night here. Perhaps the ‘early openers’ would be more appropriate.

This defenetly applies to the USA . I have often seen cops hanging out at Dunken Donuts and Mister Donut stores. The 1980’s police show Hill Street Blues had a scene where a cop can’t scale a fence to chase a bad guy after eating too many dounts. 24 hour restaurants such as Denny’s and IHOP and 24 hour donut shops are quite common in the US and naturally cops will hang out there having their coffee. Many of these places will give the cops free coffee and snacks as their presence enhances security for staff and other customers. I worked for a bit at a 24 hour restaurant in California that always gave free coffee to cops.

Oh dear, for my sins I bought a donut at that shop today. I regretted it very much.

I think the answer is a knighthood for Kenny-boy

If you want to find all the cops,
They’re hanging out in the donut shop.
They sing and dance (Oh-Way-Oh)
They spin their clock and cruise on down the block