Thankfully my umbrella was not in as bad a state as this one, but it was in need of replacement. 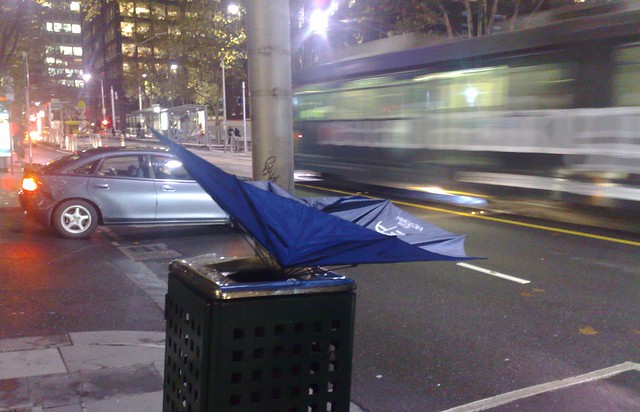 And of course via procrastination it was only on Thursday, when it had been raining, that I got motivated enough to go out and look. This is in part because I’m a terrible shopper. Or rather, I’m a terrible buyer.

But I decided I wanted to find out if there was some marvellous mega-brolly to be had. The perfect model for a PT user in a sometimes-rainy city. Something astoundingly compact, light, strong, and yet providing lots of cover… without being one of those stupidly large golfing umbrellas.

I was prepared to spend a reasonable amount on it, too, because I don’t think I’ve ever actually lost an umbrella.

Having spent a lunchtime looking around some CBD chemists, David Jones and Myer, I concluded that one could spend up to $200 on an umbrella, and there were plenty around the $60-70 mark, but it was not clear how or why they were any better than the $20-30 ones. For one thing, they were almost all the same brand (Clifton or Shelta) and none of them seemed to have a frame warranty longer than a year.

In fact the only thing that appeared to differ was how impressive the handle looked.

It left me a tad bewildered and I came away from my shopping trip empty-handed.

The next day I did some more looking and eventually I settled for a Shelta umbrella from a travel shop. At $38 it’s probably a bit extravagant, but I went for it because it claimed to be of a strong but light material, and did indeed seem lighter than the others, so good for carrying around in the glorified lunchbox that is my brief case. And, well, because by that point I was sick of shopping and just wanted something.

It’s probably not the ultimate in umbrellas. Maybe that’s still out there somewhere.

11 replies on “Quest for the ultimate umbrella”

I bought a Shelta umbrella about 15 years ago and am still using it. A durable piece of kit. However it is not a folding umbrella (I.e. It stays it’s full length, no telescoping handle). The folding ones are inherently weaker. I went through several of them until I finally spent about $27 dollars on one and it has lasted so far a few years. So I reckon you made the right choice

I bought a small folding umbrella from the Reject shop 10 years ago for $2.95 and I’m still using it. They don’t make them like they use to!

I want to try the Senz. A friend in the Netherlands raves about it.

Mine has a button for unfolding and for folding, though it doesn’t fold all the way down with the button – it just collapses to its closed position so you can go through a doorway. But people are often impressed when I push the button to do that.

Larger umbrellas have vents in the canopy so that wind can blow out through them without bending the umbrella frame backwards. They’re handy. I don’t have those vents but I’ll look for them on my next umbrella.

We had a good golf umbrella from my wife’s school alumni fundraising shop and never got to use it. Someone made it vanish from our front hallway within a couple of weeks of us buying it and we still have no idea who did it. To this day it remains a mystery, 6 years after purchase.

Having worked in the Docklands for some years, I have seen the demise of many an umbrella coming over the notoriously windy Collins St bridge. In fact I used to enjoy having a coffee at Summit cafe just to watch the ‘Umbrella Parade’ on wet, windy days…

With the dollar looking fairly good, I’m tempted to get one (or more). Maybe we could do a joint order if people are interested (free shipping, then.)

I’ve been meaning to check some of these out in real life – they look nice.
http://www.bluntumbrellas.com.au/
If you do let me know what you think.

What do you look for in an umbrella? Something that can fire a pellet of ricin?

A Mary Poppins magical one? One with a sword in it?

Or just one that pretends to keep you dry. That’s beyond current technology, I’m afraid.

Yesterday I took delivery of two Senz umbrellas (a mini and an original). Now we need some rain…