A number of seats in the November state election were won and lost because of public transport — and the Frankston line in particular.

Statistics continue to show that the line is the worst for punctuality in Melbourne, with a 12 month average of just 69.6% of trains on-time within five minutes.

Perhaps it’s fitting that the official abbreviation for it is Fkn. 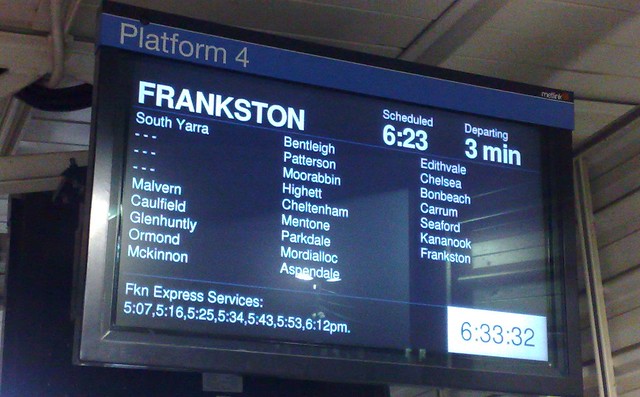 The impact was acknowledged by both sides of politics.

Bentleigh, Mordialloc, Carrum, Frankston: four seats through which the Frankston Line runs like an artery, four seats that bled Labor to political death.
…

[Former Bentleigh MP Rob Hudson]: “But it’s a big commuting suburb. Ten thousand people pass through Bentleigh railway station every day, and the Frankston Line . . . has had reliability issues that have been frustrating commuters.”

…it is a terribly performing line. It’s a line that’s enraged and upset people massively.

On the Frankston line, we lost five seats. On the Lilydale line, if you count Mount Waverley to the south, we lost four.

(Nick Reece appears to have included Prahran, the eastern end of which is served by the Frankston line.)

So new Bentleigh MP Elizabeth Miller must be acutely aware of public transport issues in the area. In fact she raised the topic of Southland Station last week in parliament.

During the election campaign I made a commitment to my electorate of Bentleigh to see a railway station built at Southland shopping centre. This is a piece of infrastructure that is long overdue, which is symbolic of the previous Labor government’s inability to provide for our growing community. I ask the minister to provide an update on this commitment and on when my electorate can expect construction of this railway station to commence.

It’s just a shame it’s been decided that her electorate office will be moving from its current spot, a few doors from Bentleigh Station, down to East Bentleigh — a long way from the station.

One would hope this doesn’t mean she’s running away from the issues, and that she realises how important improvements in public transport (not just trains, but also trams and buses) will be if she is to retain her marginal seat, and indeed if the government is to retain power in the next election.

I for one look forward to progress on Southland Station and other key promises, particularly the Public Transport Development Authority, which if done right will reform the poor transport planning that’s got us into the current mess.

Update Sunday 17/4: A notice in Elizabeth Miller’s office window now says the move is not happening just yet.

7 replies on “The Fkn line and the state election result”

If only two seats that went to the Libs had been retained by Labor, the government would have been returned. Therefore if Labor had of done better with respect to just ONE issue, they would have got enough votes to cross the line. Issues include: reliable public transport, crowded roads, myki bungle, huge increase in utility prices, unnecessary desal plant, violence on the streets, major project cost over-runs, ambulance by-pass, hospital waiting list blow outs, school failures and child protection failures.
All of these issues affected voters in the seats you mention, and, of course, public transport remains a huge issue.

If that pic was taken today, the 5:43 express didn’t run, confirming the lower screen is a static timetable.

Roger, I would add three more things to your list: (1) the Justin Madden / Windsor Hotel affair; (2) the activities of MPs such as George Seitz, not least the continuing cancer of branch stacking; and (3) the total lack of transparency from a government that was elected in 1999 on a promise of greater transparency.

Bonnie, yes, thanks. Arguably, items 1 and 2 are subsets of item 3.

On the topic of Elizabeth moving her office, I heard something along the lines of the landlord tripling the rent for the shop.

As for what brought down the Labor Government, my opinion is that while Bracks was alright, he surrounded himself with idiots – Botchalot and Madden, and most of the others.

When Brumby came into power, I think he was about as good as Kennett (i.e. very good), but again the morons around him, and the legacies of those recently booted out, were what destroyed him.

David, I can’t agree with your thesis that Labor had two essentially good leaders who were brought down by the “idiots” surrounding them. I disagree for two reasons.

The first is that I don’t believe they were idiots. Look, I’ve been extremely critical of the performance of state government MPs such as Batchelor, Kosky, Madden, Holding, Pallas, Seitz, Haermayer, Theophanous, et al, over the past decade. But no matter how much I disliked their actions, the one thing I wouldn’t accuse them of is idiocy. Far from it. Some of them must have been possessed of considerable intelligence (or rat cunning, if you like) to have stayed in power as long as they did and to have spun their way out of various public scandals and crises. No, I reserve the term “idiot” for the genuine article – people such as Steve Fielding and Pauline Hanson. I’m sure it’s no coincidence that such people are usually one-term wonders.

The second reason is that I can’t see Brumby or Bracks as any kind of innocent victim of the actions, foolish or otherwise, of the people around them. Any political scandal of the past decade that you care to name – Bracks / Brumby were either right there in the middle of it, or, if truly ignorant of it, they shouldn’t have been if they were any kind of competent premier.

A classic example of this – and the one that finally determined which way I would vote in last year’s state election – was the bungle that occurred in mid-July 2010, when Footscray residents found out from the media that their houses were going to be compulsorily acquired for the Regional Rail Link, while Brumby swanned off to a lunch in which he made an announcement on the same issue to business leaders and the media. Common decency says the residents should have been advised earlier, in a proper manner. But oh no, the government spin doctors wanted to keep a lid on it until the very last minute. Serves them right that it blew up in their face. And we’re to believe that Brumby was completely innocent of the plan to advise the residents only that same day? Yeah, right. What an utterly contemptuous, grossly insensitive attitude.

That incident, for me, was the last straw in a long, long line of similar displays of contempt towards the public. And, unfortunately, early signs are that the Baillieu government is headed the same way. In particular, I’m deeply concerned about the government’s almost pig-headed refusal to listen to the compelling arguments against having two armed protective service offices on every station. These arguments are coming from people who know what they’re talking about, and the government appears to be just brushing them aside with the same kind of arrogance that the previous government displayed.