I was impressed enough by the Google Chrome advertising at suburban railway stations, such as this poster at South Yarra. 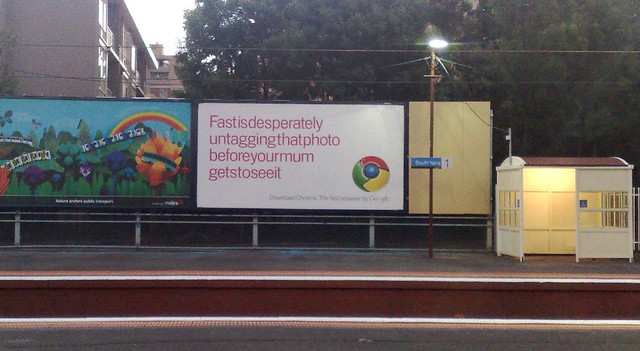 Then someone told me Southern Cross Station had also had a Chrome makeover. Sure enough… 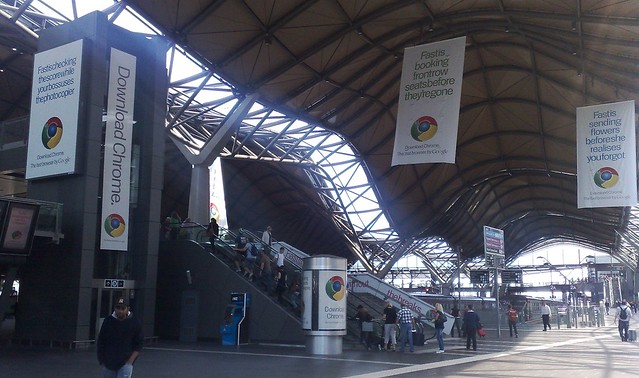 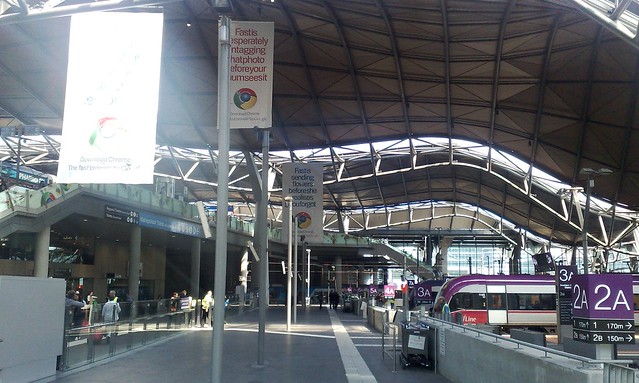 Apparently this Internet thingummy-wotsit has some money behind it.

(Note the banners along the sides of the upper deck.)

I’m always like ‘HAY, HOW DID YOU GET OFF THE INTERNETS?! OMG THE INTERNET IS FOLLOWING ME AROUND!!’

“Then someone told me Southern Cross Station ” … hehe that would be me? As I said it’s pretty in-your-face… I don’t think there’s an inch of advertisable space that’s left unChromed there ;)

But funnily for once I actually believe the hype, I’ve been using Chrome for months and its the best browser I’ve ever tried.

@Carly, yeah it was probably you. Sorry; sometimes my brain retains the information, but not where it came from! And Twitter is a pain to search for anything older than a day or two.

Haha no worries, i’m just flattered you thought it was interesting enough to blog about =)

Now my next question… Has the PTUA ever investigated mobile coverage on suburban lines? I’m with Vodafone and coverage drops out between Malvern and Richmond, particularly badly around Toorak. I’ve seen others drop calls in that patch as well, no idea who they’re with. Seems ridiculous to be so close to the city and get no coverage! Irritating when you want to check twitter or read news…. it usually springs to life just as we’re going into the tunnel :(

Chrome billboard(s) at Mentone station too.

Funnily your headline also often applies to individuals onboard the 112 tram.

Silly me. I thought Google already was a browser. Are the people at Google saying it’s no good?

Carly & others, I’d be interested to know what benefit Chrome has to offer? I tried it when it was released but didn’t see any advantages over Firefox which has a huge number of add-ons and extras available.

What advantage is there for Google if we switch??

I remember when Netscape was the browser of choise :-)

Marin Place also has it. Sorry, but found it a bit ‘meh’; The Economist’s station campaign was wittier!

Re mobile reception between South Yarra and Malvern. You are in a cutting for much of that distance making reception difficult, particularly with old phones or carriers with limited base stations.

@Carly: “I’m with Vodafone” — yep, that’s your problem right there. No issue on Telstra.

Mobile phone reception is one of those things which is undoubtedly a useful passenger amenity. Perhaps not the highest priority for campaigning on, esp as it’s more a carrier issue than a train operator issue.

Chrome -clean, fast, stable in my experience. I use Firefox too, and find Chrome more enjoyable. Lots of add-ins for Chrome, but probably not as many as Firefox – not a real issue for me because I’ve never been into them. Apparently Chrome uses “sandbox” technology. Don’t know if Firefox has this yet – each tab is “self contained”, supposedly stopping malware from leaving your browser tab. The IT readers of this blog can probably provide more knowledgeable explanations of that!

Saw this today. I love google chrome so for once I support ‘in your face’ advertising.