Some of the clocks at Flinders Street Station need updating.

If they managed to update the leftmost clock to say “Pakenham and Cranbourne” (the Cranbourne line opened in 1995), why can’t they update the “St Albans” one to say “Sydenham”? (Actually, wait a year or two and then change it to “Sunbury“.) 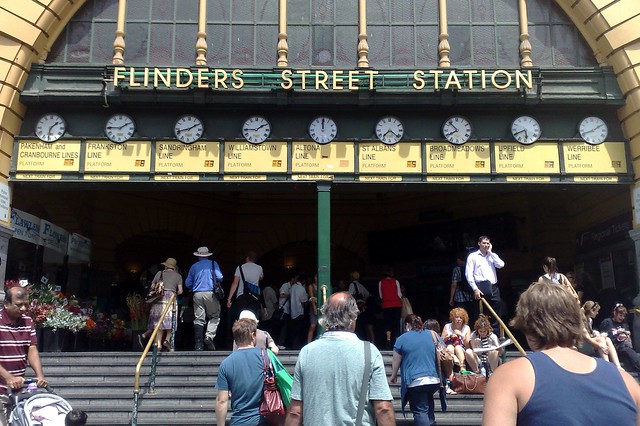 There’s no Altona line anymore (it was extended to Westona and Werribee in the 80s), but it’ll be useful for the Altona Loop trains to Laverton, which there’ll be more of from May. (I wonder if it will actually work?)

The clocks for the Burnley group lines are off to the left, where on this occasion, underneath one could also see some Authorised Officers booking someone for not having a ticket. 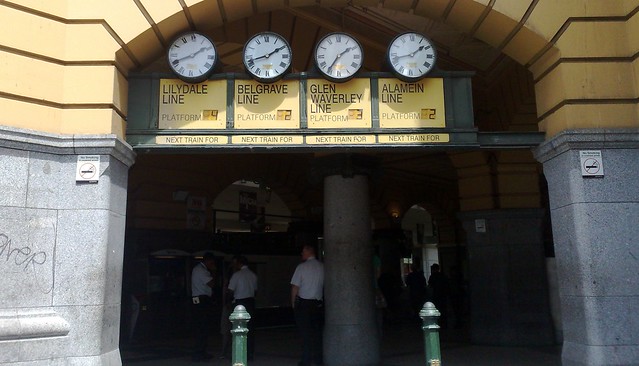 Now… imagine the scandal if it was announced that the steps were to be abolished, to be replaced by a DDA-compliant ramp.

Update lunchtime: Niki pointed out in the comments what I didn’t even notice: the Epping and Hurstbridge lines aren’t represented, as until 1997, they departed across the road at Princes Bridge Station.

These photos from the 1950s show that the clocks have been swapped around over the years. The rightmost two used to be for the St Kilda and Port Melbourne lines. And many of them used to list the major destination, followed by the line name, for instance “Essendon – Broadmeadows line”.

14 replies on “Under the clocks”

Ha ha. Of course, no need to demolish the steps. There is a nearby alternative for our step-challenged brothers and sisers.

And about time to add the Epping and Hurstbridge lines. How long has it been since we stopped terminating at Princes Bridge station? Before the creation of the Cranbourne line.

The Clifton Hill line clocks are somewhere up there too if I remember correctly. Although terminus: Epping would need to be amended to South Morang sometime next year, provided the world doesn’t end.

While they’re updating the clocks (or “destroying heritage” as I suspect some will respond) they might as well add some space for Melton and Domain/Westall. Or if you’re really ambitious, Rowville and Airport lines…

@Niki, good point! They would have been at Princes Bridge Station, removed in the late-90s (Wikipedia says 1997). If more clocks can’t be sourced (I wonder what happened to the Princes Bridge ones, or those facing Elizabeth Street?), then perhaps Altona should be combined with Werribee, and Lilydale combined with Belgrave.

It was suggested that perhaps there’s a heritage overlay preventing updates. The heritage register doesn’t specifically mention a problem there. Even if there is, it’s a bit silly, given the rail system is (slowly, unfortunately) expanding, and for the clocks to be valued, they need to be accurate, and this can be done without impinging on their heritage value.

No no. I will get very lost if the names are changed. I have only just got used to the change of the Dandenong line to Pakenham line.

My mothers parents first met under the clocks at the end of WWII. Luckily for them most of the freaks that seem to hang around there now weren’t there at the time to scare them away.

Epping and Hurstbridge is not on.

I stand corrected. I would’ve swore blind I’ve seen Hurstbridge & Epping up on that board, but obviously I was imaginating stuff. Indeed – nice work Niki!

Really 1997? Wow, I would’v’e thought it was earlier. I remember coming into Princes Bridge station in 1993, but I was sure we started arriving into Flinders St in 94/95. This is not based on anything but (possibly unreliable) memory, though.

from wackypedia…
The site retained the name “Princes Bridge Station” until it was integrated into Flinders Street Station as platforms 14, 15 and 16 on June 29, 1980.[6] By 1975 the track had been simplified to only run into platform 14 / 15 / 16,[7] and was further simplified by 1982 due to the construction of the City Circle portal of the City Loop nearby.[8] The track layout remained the same in 1995

Yep, I noticed that the Epping and Hurstbridge Line clocks are missing! They should’ve updated it after Princes Bridge Station was closed. The Altona Line clocks should be reinstated to cater for Seaholme/Altona/Westona passengers from May due to the timetable change and the clocks should be the same time as the Werribee clocks plus reminders to change at Newport for Altona. I just looked at the links of the old clocks, and also noticed that there was flaps of the destination. This should also be reinstated so people who enters via the concourse can know when is the next train of their line terminates.

The supplementary destination signs ( flaps ) were manually changed as required by the Clockman when the clocks were manually adjusted. With the introduction of the electronic screens on the platforms, the clocks were out of use for a while, prior to public complaints which caused there reinstatement by power operation.

Unfortunately the first method of power operation was a short lived failure, and it was some time before a new system was instituted, which is still extant.

[…] how long until the next trains depart. Like the rest of the station the destinations displayed are way out of date – St Albans hasn’t been a regular terminus of suburban trains for almost on a decade, […]