In central Melbourne, if you want to travel a reasonable distance east-west, it’s easy to do so on most of the streets by hopping on a tram. Flinders Street, Collins Street, Bourke Street and Latrobe Street all have multiple routes serving them, making for reasonably frequent services most of the day.

Not so Lonsdale Street.

Once upon a time, Lonsdale Street had trams. Cable trams ran from Collingwood and Carlton via Elgin, Lygon and Russell Streets, and also from West Melbourne, to Lonsdale Street, from the 1880s to the 1930s — though some sections of track were built as late as the 1920s.

It’s all buses these days, but until recently they were a mass of different routes, turning off at different places, and many of them running infrequently outside peak hours.

However, late last year (just in time for the election) a batch of four bus routes that go down Lonsdale Street from the Doncaster area got upgraded to Smartbus status, under the name Doncaster Area Rapid Transit. (As one wit observed, lucky it doesn’t serve Frankston.) 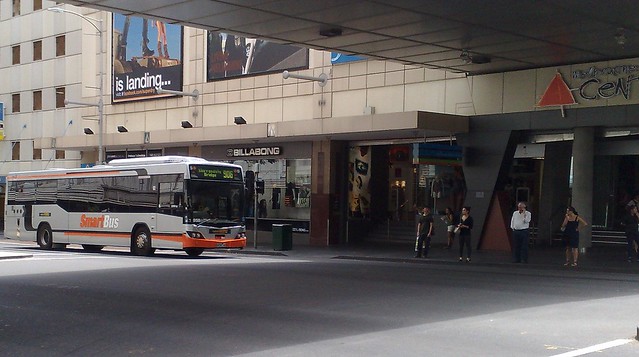 There’s some doubt over whether they’re the best solution for Doncaster to CBD travel (many would like to see a train line), but within the CBD the result is that four frequent (well, for Melbourne) routes combine to make a very frequent service virtually all the way along Lonsdale Street — from about half-a-block from Spencer Street to Spring Street (and beyond to Victoria Parade).

With their totems, the bus stops are easier to find than the average Melbourne bus stop, though are not as prominent as tram stops, and are not quite as consistently spaced (though there is a stop roughly every block). 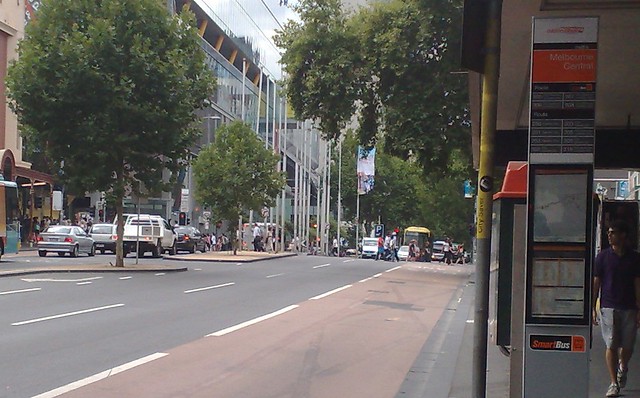 The buses are distinguished by their 900-series route number (905, 906, 907, 908) and the grey and orange Smartbus livery, making them easy to spot amongst the others that use the stops (but don’t go all the way down Lonsdale Street).

The combined frequency is a bus each way about every 3-4 minutes on weekdays from about 7am to 9pm, with more during peak times. That puts it roughly on a par with other east-west CBD streets during off-peak hours, and more frequent than Latrobe Street.

On weekends and in the evenings it’s a bus about every 7-8 minutes.

Not bad, and while many may prefer trams to buses, this completes the set of frequent routes along Melbourne’s CBD’s main east-west streets.

They’re not perfect. They have a lowish frequency at times, lack of bus lanes outside peak hours, and the buses are likely to be a tad slow due to heavy loading eastbound in the evening peak hour. And the fancy automated signage at most of the eastbound stops doesn’t work yet.

But already I’ve spotted people other than myself using the buses for hops along Lonsdale Street, and it’ll be interesting to see if this catches on. Perhaps if they were clever, they’d promote it.

13 replies on “PT on Lonsdale Street”

I’ve worked in the city for over 30 years and NEVER caught a bus to get around the CBD. Unless you’re travelling from one side of the city to the other (approx 1km), walking is usually the quickest. This applies to able-bodied persons with no luggage or ankle-biters in tow.
I presume you would have to touch-off when getting off the bus for the short journey, unlike a tram?
PS I had to think for a few seconds to get the Frankston (DART) joke. Nice one!

@Roger, on Myki Money, theoretically you don’t have to touch-off if the bus is inbound (westbound) terminating in the city. You also wouldn’t need to if travelling on a Pass, or if your other travels that were going to cost you a Z1+2 daily fare anyway.

I work near the corner of Victoria Pde and Lansdowne St East Melbourne and see these buses churning along at many different times of the day, from the peaks right through the interpeaks.

They hardly have anybody on them, whether heading towards town or away from it. Ten passengers would be a very good average load — yet some of these buses are even articulated.

Unless many more passengers are getting on or off in the Hoddle St part of the route that I don’t see, they are a VERY costly way to move a very small number of people. And the traffic congestion they cause where they turn in and out of Albert St at Gisborne St has to be seen to be comprehended.

They’re really useful for me for getting into town from Abbotsford – much more frequent than the train, which is only three per hour out of peak. I usually don’t have to wait very long for one as all the DART buses come down Hoddle St on their way to town.

I thought something had changed. So I won’t get chucked off outside Myer if I catch a 9** bus. Good news. Of course if there was a better Latrobe Street tram service, I wouldn’t be so tempted by the bus.

And like any other bus service, it can be late or cancelled completely, and you will never know. You just stand there… waiting…

@David McLoughlin
I did a quick survey the other lunchtime and the maximum number of passengers leaving the city on one of the Smart Buses was 8, with most of them 6 or less.

The buses will be moving from Albert St on the outbound, instead turning left from Lonsdale St into Spring St and then right into Victoria St. The new lanes and traffic lights have been in place for some time. Too bad for those people who board the bus in Albert Street outside the fire station.

The buses will be moving from Albert St on the outbound, instead turning left from Lonsdale St into Spring St and then right into Victoria St.

@Jagger, how often are your buses cancelled?

And actually, eastbound when they eventually get the signage working, there will be realtime updates.

@David, they’ll eventually run via Spring St both inbound and outbound. Not sure how they would stuff-up the trams any more than the existing traffic does. They won’t intersect trams on Spring St, as they are all further south of Lonsdale St.

To the people saying these buses are empty, in the off-peak there only seems to be a handfull of people on them, but in peak hour some of them actually get crush loaded. The 906 is like that.

I’ve noticed people using these buses from along Hoddle Street (as an alternative to the Epping line trains?) and the odd person getting on along Victoria Parade. For the latter, it would be handy if you were going to the northern half of the CBD rather than Collins Street where the (always crowded) trams go.

I use it to travel into the city – live near the Wetherby/Middleborough Road on-ramp on the eastern. Express all the way between Wetherby and Hoddle, so the trip is a quick one. I tend to walk once I’m there – most of the places I am going are within two city blocks of Lonsdale Street – though did take the tram to Jeff’s Shed on Sunday (on an old Metcard Sunday Saver). Don’t often see more than a dozen people on the bus, but I don’t travel in peak times.

i don’t understand your joke about Frankston Daniel ?
call me an old fart but i was hoping you could explain it to me.

@Pearcey, I’m sure if you read the paragraph again you’ll get it.