I’ve been thinking for a while about updating my television (a 68cm Loewe CRT, non-widescreen, analogue) to a shiny new digital number.

People who know more about this stuff than I suggested I look at Samsung’s offerings. I know I’ve had two Samsung computer monitors for years which haven’t missed a blip, so I took a look.

In the shops, anything smaller than about 102cm (40 inches) looks tiny against all the massive sets on display. But I know that in a relatively small livingroom, 81cm (32 inches) should do nicely, though I wasn’t sure if that would still be bigger than the old TV for 4:3 programmes. Some quick calculations involving Pythagorus seemed to establish that it would be. 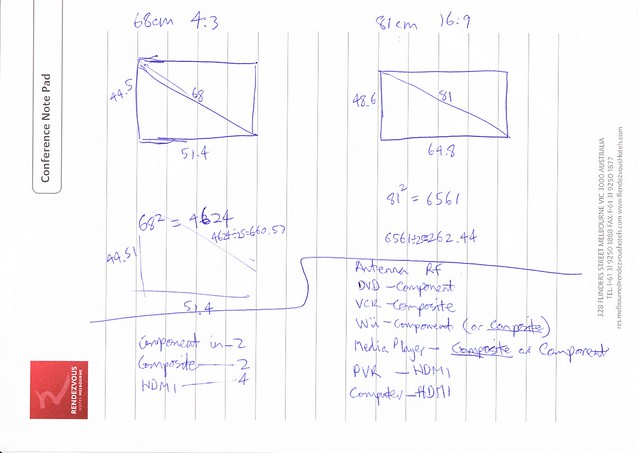 Samsung’s Series 6 look pretty good. Full HD, 100 Mhz, play media from USB, Internet access, including Youtube and ABC iView (soon). Enough sockets that I’ll be able to plug everything in (and have spares).

But the street price? Seemed to be around $800-900 depending on where you look. $750ish from some online place I’ve never heard of before. Hmmm. Maybe later this year I’d have enough shekels saved up?

Then yesterday in Retravision I spotted it for $699. Oooooh.

To coin a phrase, stay tuned.

Update 11am: I got it. The good thing about buying a non-huge TV is I get to take it straight home in the car. Have set it up, but will need to get some new component/HDMI cables for things, and still figuring out the menus. Looks good though; the cricket looks glorious on it. 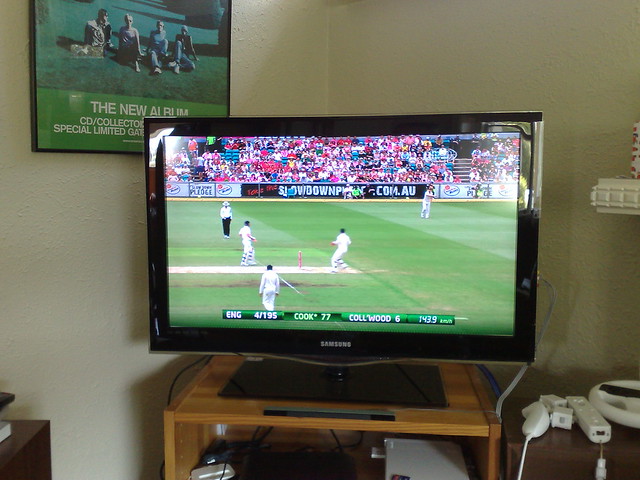 Update Thursday 8am. Figured out how to get it to ignore duplicate channels. Still wondering if there’s a way to get it to display programme information each time you switch to a new channel, as the STB did, and other TVs do. Also hooked it up to the PC (not ideal, but still tweaking settings) and ordered a cheapie Wii Component cable off eBay for $8 (after seeing them for $40-48 in the city yesterday).

Update Thursday 3:20pm. Seems I’ve found something not to like about this TV: most Set Top Boxes and digital TVs will automatically show you the programme information when changing channels. This one doesn’t, and it appears there is no way to set this option on… one has to manually press the INFO button, or use the GUIDE.

Will the TV allow you to show photos directly from a USB?

That’s not functionality that particularly interests me, but yes, it will (JPEG only).

We also need a get a new telly, but I always think I’d much rather spend the money on something else *sigh*. Just a bit fed up not seeing the whole picture (as it is not wide enough) and always missing the first names of people if they are written in the corner in interview types of shows. Well, I reckon it is time to first upgrade the GPS so that we can do some more geocaching and then get the telly. Fortunately I have simple requirements: wide enough and cheap.

Go for it! I got the 46″ version just a few weeks ago and loving it.

Only drawback is that after years of staring at CRTs, it’s taking a while getting used to how clear thing are. Almost TOO clear sometimes- movies tend to lose their grainy, watching as a distant observer feel, instead making you feel lile you’re on the set.

But I’m sure I’ll get over it. Happy viewing!

I’m sticking with my 78 cm Loewe widescreen CRT until it catches fire (which it might, one day), and in the meantime watching the price of a Panasonic plasma drop further every month. At this stage, that is the replacement candidate based on my in-store DVD comparison work. Although Loewe’s LCDs are finally looking like reasonable replacements for their long gone CRTs so I’ll have to redo my comparisons now.

What’d you do with the old Loewe?

That maths stuff sure came in handy – finally!! :)

We got the one from 32″ from Aldi a little while ago for $399. Has a built in PVR function too, all we had to do was add a small portable 2.5″ HDD (WD Elements) and it was ready to record. Being USB powered is saves a plug on power adaptor too!

@Julian, my sister needs an old TV of about that size (hers is playing up) so she’s taking it.

I may have dithered a bit more before buying if the old TV didn’t have a home to go to.

eBay is the best place to get cables. A quick search now shows Wii component for $6, HDMI cables for $7, both with free shipping. Never go retail for cables! And the Wii looks fantastic on component.

I’m doing the same as you. Watching us fail at cricket in beautiful hi-def. I wonder if I’d feel better if it was all grainy.

We got a 32″ Panasonic LCD about 3 years ago and it is plenty big enough. Only reason we made the move is that I was struggling to read the subtitles even with my glasses. Funny thing was the salesperson tried to convince us that this size was only good for a bedroom and that we really needed a larger size. Given we had only had a portable TV for about 10 years ANYTHING was going to feel huge!

Thinking about a HD recorder and have read all the comments on the Topfield on this blog — any updated thoughts on this?

We bought a LG LD560 for $1229 back in July last year to replace our old Sony 68cm CRT hooked up with a Teac set-top box since I found a big bargain on a catalogue. The DVD pictures via composite is so blurry you can almost see squares. Last week we bought a Strong PVR and I’m afraid even when connected to the LG TV via HDMI it is still has a dark picture. Daniel, you may consider purchasing a Blu-Ray DVD player when your DVD dies.

You need one of these babies.
WDTV Live.
I paid $175 just last May.

You wont regret it.

@cdg, sorry, but why would I need one of those? Apart from the fact that I already have a media player, the TV can play directly off USB – which in fact has rendered my existing player obsolete.

I had no idea you were such a consumer! But I suppose it’s part of keeping up the appearances of being an “average Australian.”

I wrote about buying a huge television here. As you can see, I didn’t have nearly as much fun:

I’d probably say I was a reluctant consumer. Keener people than I wouldn’t have held onto a 4:3 CRT television for so long, let alone bought a $700 32″ LCD to replace it – the trend is for much bigger and more expensive screens.

Well done Daniel, sure you’ll enjoy it. The Wii component cable will make a big difference. Even my 1 year old Sony Bravia doesn’t have all that USB type functionality. Bit annoyed about that but it’s too late now. I’m sure by the time it needs replacing TV’s will be full on PC’s. I have a Mac Mini as my HTPC and that does all the good stuff anyway, so not to fussed.

Geez, I am definitely part of a dwindling minority with a fatback as the main TV! Although my plan is to upgrade it as a treat to myself once I have finished some pesky final renovations.

Interesting to know that a 32in widescreen is equivalent to a 68cm CRT. I had been planning on upgrading to a 40″ or above, but that fact will help stop me running away with buying something too big! AND I can’t believe I will only have to pay around $1000 (and get lots of handy features) cos I have waited so long!

Glad to hear it found a home!

I’m getting damn sick of walking down what seems like virtually any street in Melbourne to see CRTs sitting on the curb, but I suppose it’s hard to know what else to do with them.

Recycling them is difficult and time consuming at best and landfills are not good places for them at all….

Mean while I’m contemplating updating my current 22″ el cheapo CRT. It was fine in my old house where I used to generally sit fairly close to it, but from the distance I sit now it’s starting to feel tiny, and I’m getting very fed up of reading subtitles to my partner!

@Julian, you can probably find a pretty good, working, bigger CRT on the curb. I know there’s one in my street (idiots must surely figure out once it’s been there for a week that nobody’s going to take it, and they need to ring the council for a hard rubbish pickup.)

In fact before Christmas was one that its remote on top, and had a notice on it saying “Fully working, please take, happy Xmas!” Someone took that one.

Yesterday I bought a Onkyo AV Reciever (SR578), one reason was that it will upscale any input device (Foxtel, DVD, Wii etc) to 1080p so HD input / output for the 32″ LCD. Picture is much better.

I’m not saying this is necessary or worthwhile but with the multitude of sound options makes watching the box a little more immersive.

I went to a friend’s house here in Japan the other day. His family had a 52 inch TV. That combined with blue-ray paraphernalia and a whopping sound system…it was pretty damned impressive (if not expensive!)

@Julian W – some friends of mine ‘bought’ a 68cm CRT off Ebay for $2. The people selling it said they were determined not to throw it out on the nature strip to be ruined by the first rainfall/vandal. They felt certain that someone out there could use it.

My friends needed to replace a dead CRT and didn’t care too much about the latest and greatest so it was a win-win. $2 and your 20mins to go pick it up is not too bad at all.

I’ve passed many TVs on the curbs with “working” signs, etc and been tempted to grab a few, but I don’t own a car and balancing something like that on my bike or skateboard isn’t likely to work!

I should have a look on eBay and see if I can find something cheap and close, that way I can at least have a chance to arrange to borrow a friends car.

Rod, you’re correct — the widescreen is slightly less tall than the old TV. I attributed it to differences in the visible area of the screens, but I wouldn’t rule out my maths being wrong!

I went with 78 cm CRT (in CRT terms it’s the equivalent of about 32″ of LCD) when upgrading to widescreen because a 16:9 picture would be comfortably bigger than it is on a 68 cm 4:3 screen, and a 4:3 picture would be slightly smaller, as you will have noticed. It’s a good size for most rooms.

> Some quick calculations involving Pythagorus seemed to establish that it would be.

You seem to be trying to retcon Pythagoras to a Latin name. His mystic numbers will curse you!