Marita may never own a car (she doesn’t need one), but she likes (new) Minis. Always spots them on the road.

So I got her one for Christmas. 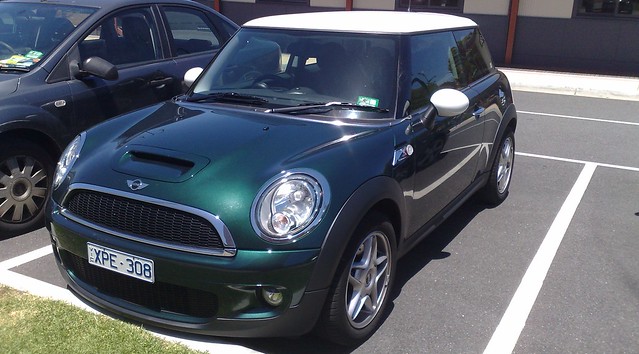 Well, for a day. Hertz offer them as part of their “fun collection“, so I reserved one and went along on Wednesday to pick it up. Despite the posters on the wall at Hertz saying “Every second counts”, they had a very long queue due to computer problems, but eventually I got it and drove over to Marita’s to pick her up.

I had told her to expect me at 11:30, but hadn’t told her what I would bring, and it did manage to catch her by surprise.

We jumped in and went for a spin to see her brother and his fiancée down in Cape Paterson, which is past Wonthaggi.

If you’re driving to Cape Paterson, be aware that Mr Google doesn’t know about the roundabout outside the Wonthaggi hospital. If you think that’s the roundabout referred to, and follow the directions and take the third exit, eg turn right, you’ll end up near the Desalination Plant and the nearby wind turbines, which are impressive, but not where we wanted to go. 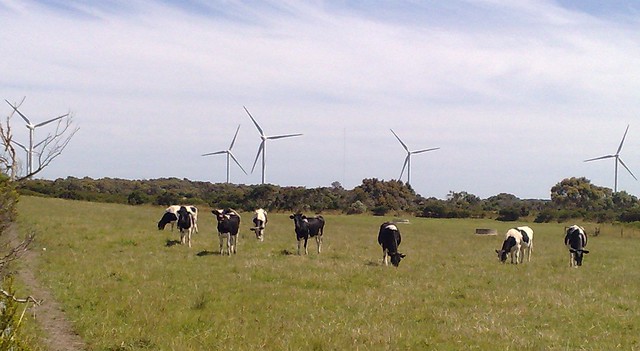 We had a nice afternoon tea, a walk around the beach, and then drove back into Melbourne.

The next morning, before returning the car, we had a nice little drive around the place… up Beach Road, through Elwood, along Acland Street, that One Sweet Promenade, then around Albert Park Lake, back to Beach Road and through Port Melbourne, over the Westgate and back again, and along St Kilda Road, before filling it up and taking it back to Hertz, where for the second day in a row, they had a queue out the door (which fortunately we could avoid this time). 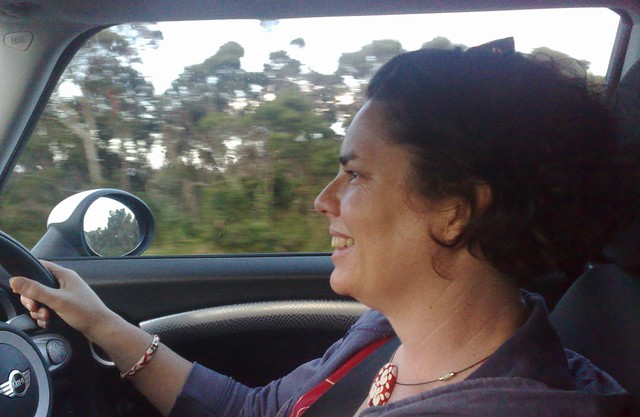 The Mini is a heck of a lot of fun. Very nice to drive, very zoomy, and seems as economical as my Astra (eg, very). And of course it looks great. Quite comfortable, too… at least in the front.

On the down side, there’s virtually no room in the back seats, unless you’re going to limit yourself to carrying only amputee midgets. In practical terms it’s clearly a vehicle for 1-2 people max. Ditto, very little room in the boot. The speedometer is in the middle of the front console, so you have to keep looking across to check your speed. This version didn’t have cruise control, though I would assume some do.

I don’t think I’d want to own one (it just wouldn’t be practical), but it was great fun for a day.

7 replies on “Mini for Christmas”

What a fun idea and nice Xmas present for a friend. My kids love minis too.

I thought Australian Design Rules made the manufacturer to move the speedo to somewhere in front of the driver before they were passed for use in Australia. Something about swapping the speedo and the tacho positions.

@Andrew, it’s true, the tacho was where the speedo could have been. Maybe it applied to Minis sold after a particular date? I don’t know how old this one was; it had about 18,500 km on the clock, though we covered something like 400km in a day.

You old romantic, you. Great idea.

I’m pretty sure the rear seats are there only to save on import duties. (2-seaters get a higher rate, I’d wager.)

Great shot of Marita. I see she liked the present.

That ADR is satisfied by having a digital speedo in the multi-info display above the steering column, but you may have to tell it to display speed instead of fuel consumption or whatever else it’s displaying.

The old Nissan X-trail had all its gauges in the middle but was probably exempt from that particular ADR due to being a 4WD and not a passenger car. Even though it is quite obviously a passenger car.

I didn’t buy an xtrail for that very reason. Tried driving one twice but hated the speedo in the middle. I don’t know who thought that was a good idea.