A Herald Sun survey suggests crime and public transport are two of the hottest issues going into the Victorian election (which is in just over a month).

So you might expect the government to be frantically putting out press releases promoting what they’re up to, and what they’ll do if re-elected. 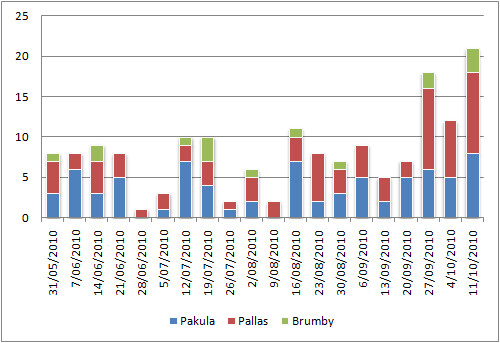 Excel’s handy dandy trend line feature certainly agrees the number of releases per week is on a steady upward trajectory. That must be what all those Government spin-doctors are up to. 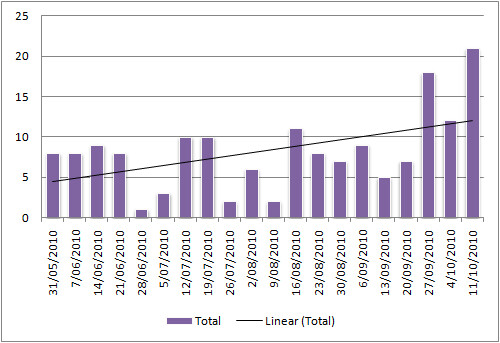 As I said last week, if you care about state issues, NOW is the time to get active.

You should not look at the raw number of releases but transport related releases as a percentage of all releases in the time period. The reason is that it is definitely the case that the total number of the releases per fortnight must be greater now than earlier on in the electoral cycle.

Dunno about a trend line. I reckon there will be an EXPONENTIAL increase in spin over the next few weeks!

@Konrad, unfortunately it would be a significant bit of work to count up all the releases. If anybody has the time to do it…

Does anybody recall what our beloved media was saying back in the 2007 election? No? Remember, John Howard had been PM for 11 years, and what were the cries back then? “It’s been 11 years, he’s been in long enough, time for a change”! This, after a decade of the greatest period of economic prosperity this country had seen since the ’60s, there were still demands that Howard go! OK, got it!

So, how long has this current Labor Bracksby (Bracks/Brumby) Government been around? 1999, right? So let me see, that makes 1, 2, 3, 4, 5, 6, 7, 8, 9, 10, 11………, oh, 11 years, wadda coinkidink! So if the argument was that the Coalition was in for too long federally, doesn’t it also stand to reason that this current state Labor Government has been around too long as well? Funny, don’t hear the “Meeja” parroting that talking point! Considering we’ve had a decade if mainly inactivity, I’d have thought people would be calling out for change! Even yourself Daniel, you’ve got to admit that this government hasn’t done much in the way of PT over the decade, and what it has done has been at an inflated price. $1.5 billion on a ticketing system should be enough to turf this mob out, along with an unneccesary desal plant. How bad does it have to get before we get rid of this government- New South Wales Bad?

You’ve got to admit, this government has done almost nothing this last term, due to a lack of electoral accountability due to fixed 4 year terms. My God, we voted out a federal government which had provided us the greatest economy we’ve ever had, because they’d been in too long! Granted, even I’ll admit that Howard had lost touch in the end, and defeat was inevitable, even if I didn’t want to see it at the time. At least that holds a government accountable. OK, this state Liberal Party hasn’t set the world on fire, but is anyone foolish enough to think that things will change if Brumby is elected (note, this is his first election as Premier) ought to have their head examined! Over 700 spin merchants- ask yourselves the question, “Why all the spin if everything is good? Do they think we’re that stupid? Obviously so!”

Come on people, send Brumby and co the message on November 27th- “Goodbye, thanks for nothing!!”

STATE VIGILANT AS PIRATES HAVE THEIR DAY, ME HEARTIESFrom the Minister for Roads & Ports
Sunday, 19 September 2010

Roads and Ports Minister Tim Pallas has today assured Victorians the state would be especially vigilant in its monitoring of the high seas as pirates and people talking like pirates “heave to”, “yo-ho-ho”, and “ahoy” this weekend.

Mr Pallas said Victoria was prepared for an inundation of landlubbers speaking like pirates and being all round scallywags in recognition of International Talk Like a Pirate Day (ITLAPD) this Sunday, 19 September.

“The Brumby Labor Government is taking action to ensure people talking like pirates, privateers, buccaneers, or any other seekers of fortune on the high seas won’t be shivering Victoria’s timbers this weekend,” Mr Pallas said.

I live in Werribee in Pallas electorate (unlike him – he lives in Williamstown) and the guy is pathetic if you have a local concern. The guy has never been a backbencher (he went straight from being elected to being a minister) as as a result doesn’t understand that one of his jobs is to actually listen to and prehaps help constituents of his electorate. Of course he is in a super safe rusted on Labor electorate so he can afford to treat us like crap – and we will just blindly vote him back in.

Yep … it’s that time again to be greeted by Tim Holding at the station platform again early in the morning (mind you he was in the wrong seat). From my information they are actually not allowed to spin there and he had to be pissed off several times by rail staff when he was doing the rounds of Noble Park, Sandown Park, Springvale – all strange when he is not my local MP (that would be Daniel Andrews); his seat is Lyndhurst …
http://www.abc.net.au/elections/vic/2010/guide/lynd.htm

He was probably a victim of taking so long to build the Lynbrook station so he could do it there!!

Sadly with four year terms they tend to more araldited to their seats and less held to account. They seem to be designed to allow the electorate to forget stuff-ups and broken promises like tolls, regional passenger services not returned and the infamous Myki system that only a few have embraced so far!

It seems a very long time between state elections, especially given the roller coaster ride we have had Federally over that period.

New South Wales government may be a disaster area when it comes to new projects, but for the train services that already exist, they running better now than at any other period in the past 50 years.

Mussolini got the trains running on time too.