A few weeks ago I did brain surgery on my computer. My PC (named “Tintin”) finally got a CPU upgrade — which I needed to move off Windows XP onto Windows 7.

It’s quite incredible how much dust was inside it. 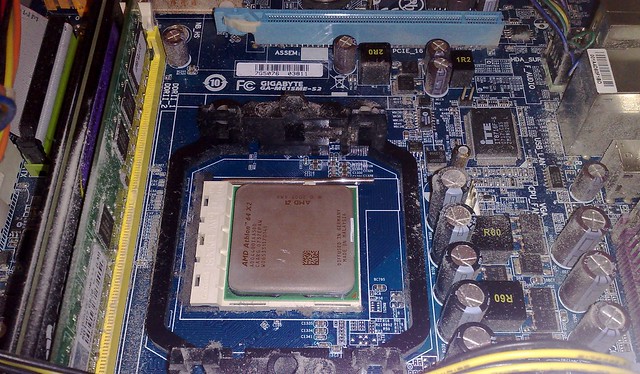 Just obtaining the faster CPU wasn’t straightforward, as sometime in the last couple of months, between the time I thought about it and when I went shopping, they stopped making what I needed (a chip to fit an AM2 socket, and which was compatible with my motherboard, eg to avoid expensive, time-consuming and messy mucking about upgrading a lot more of the computer), and they rapidly vanished from the shops.

That’s obsolesence for you.

By no means the fastest CPU supported, but I was also aiming for something with a similar power consumption, so it wouldn’t be hot/noisy (from the fan/s). Not to mention that when the full range isn’t available anymore, beggars can’t be choosers. But still about twice as fast as the old one — well, a similar speed but in two cores. Fine for standard desktop use; the other computer (“Haddock”) does multimedia and games. And on the bright side, it was cheaper than anything bought new.

As it happens, I’ve never replaced a CPU in a computer before, and was a bit nervous about it. Oh sure, I’ve mucked about with RAM, and video cards, and hard drives, all that kind of stuff. But there’s possibly nothing as delicate as a CPU’s pins, and I didn’t want to screw it up.

I took a look at a couple of books from the library, one on upgrading PCs, and another on building them. (Yes, for once the selection of computer books in a public library wasn’t hopelessly out of date.) The latter had some very handy full-colour photos of the process of inserting a CPU, as well as details of how to apply the thermal paste.

Thermal what? CPUs generate a lot of heat. The heat has to make its way away from the CPU, and to do this, you put thermal paste between the CPU and the heat sink, which is what carries the heat away (often via a fan, and out of the computer case). It’s cheap, but you have to go to a specialised computer store to buy it.

I didn’t have any thermal paste, and was going to go and buy some when I realised while poking around inside the computer there was a fair bit on the existing CPU. Could I just wipe it off there, onto the new one? I thought I’d give it a go and see what happened. After carefully putting the new CPU in, I used a CPU temperature checker to make sure the paste and the fan was working okay.

To my surprise it all seems to have worked, and Tintin is now about twice as fast as before.

Well done Tintin!
I know what you mean about dust. I pulled the cover off our PC (first time in nearly 5 years) and had to use a vacuum cleaner to remove mounds of the stuff. And the PC’s performance increased noticeably after this.
PS It’s ironic that the library had books on upgrading PCs – you’d think you’d only get the info on-line.

You can get that stuff at Jaycar too. It’s used all the time when attaching devices to heatsinks.

My father built a box and ran it for a year before realising that the heat sink was so badly engineered that it could easily be put on backwards as he had done … the little square CPU contact was not _quite_ centered, so his AMD CPU was only about 90% covered … it ran with a few glitches here and there but survived OK …

I have built a couple of computers in the last few years, and the whole experience can be a mixture of pleasure and pain. Luckily, Japan has lots of geek computer stores where you can buy everything you need under one roof. That plus amazon.co.jp means getting what you need is very easy. However, not even the staff at some of these geek stores have enough knowledge to provide suitable advice or guidance, and I’ve had to return items that have not worked together (e.g. buying a motherboard and mismatching RAM chips).
As for building & installation guidance, there are numerous YouTube videos of people stepping you through various processes. I find those invaluable.