Back in 2007 I wrote that bus route 627 is the most confusing in Melbourne, due to the fact that it doubles-back on itself — from Elsternwick, it goes east to Oakleigh, then up to Chadstone, then south to Mckinnon and East Brighton.

Even worse, in parts of Koornang Road in Carnegie, two parts of the route run together.

To illustrate the problem, take a look at these two pictures, of bus stop signs on each side of Koornang Road near the corner of Oakleigh Road: 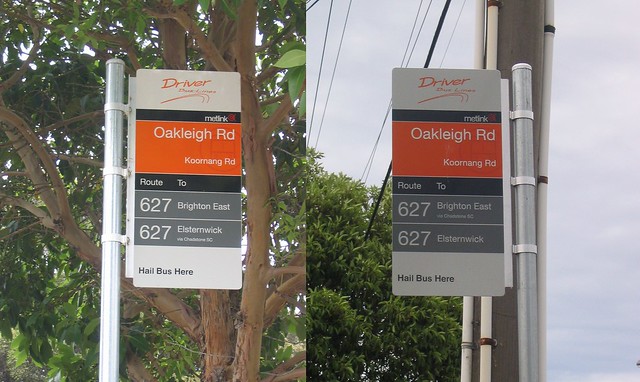 How would you know which bus stop to wait at, if you wanted to go to Brighton East, Elsternwick, or Chadstone?

It’s so dumbfoundingly confusing that they actually got the signs wrong.

The sign on the right is at the southbound stop, and despite what it says neither bus from there goes via Chadstone.

The sign on the left is at the northbound stop, and what it should say is that both buses from that spot go via Chadstone. After that they loop around and come back past here (southbound), to their final destinations.

(Admittedly these pics were taken in 2007; the signs may have been fixed by now — I haven’t checked.)

Last year I noted that the route map had actually been made more confusing, and that if the Metropolitan Bus Service Reviews couldn’t fix the route, they’d have failed miserably.

Well, the Review has been completed, and the final recommendations are out. It’s a little underwhelming, but among the changes they’re going to implement is the splitting of the 627 into two routes:

So there you go. They may not be giving all of Melbourne a grid of frequent public transport services, filling in the gaps between the trams and trains with Smartbuses — you know, a public transport network someone can actually use by choice instead of a car to get places — but at least they’ve fixed this particular problem.

What is not clear is how many of the other recommendations of the review are actually getting implemented. The Department makes you ask to see the full review report, rather than just publishing it on their web site so you can see if for yourself against what’s being implemented. Sneaky, huh? I’ve asked for a copy, but it hasn’t arrived yet.

Can they fix my local route? 416? The re-routing 5 months ago is fantastic, except the timetable for the new half of the route has been poorly drafted.

Last time I checked, it doesn’t take 4 minutes to cover 700 metres at an average speed of 60 km/h. The poor placement of a timing point in the middle of nowhere means that buses that actually travel along Sneydes Road at the speed limit are doomed to sit in front of the construction site for 7 long minutes….and let me tell you….nobody uses the bus stop.

Doesn’t matter which way I go, I always miss that express train…

My frustration is that Chadstone is only a 10-15 minute drive from my home in Malvern…. but between a 35 and 40 minute trip on public transport on the weekend.

Problem is, I don’t have a car. Why should my journey take four times as long to get only 6 k? Arrrgh!

Great news that 627 will be fixed.

It was bad, but probably never ‘most confusing’.

Nothing else comes close to the 672 for its multiple footnotes, deviations, sometime Telebus running and variety of destinations: http://www.metlinkmelbourne.com.au/route/view/916

Nevertheless for the few who comprehend it there is some logic in the mix of peak and off-peak service patterns provided.

@Haru, have you given your feedback to the bus company?

@Carly, are you far from bus 624? (Not that it’s spectacularly frequent, esp on weekends.)

My understanding is that we essentially have the same bus routes that were in place in 1937 – that it has been too hard politically ever to change them, no matter how much logic there is – is this correct?

Thanks Daniel… had a look (the route map reminded me why I stay off busses wherever possible) but no, it’s not much help. In fact I think this is one of the busses I’d have the option of transferring to from the train (I practically live in Armadale so it’s the other side of Malvern). The prospect of trying to get out there has led me smack into an understanding of people’s complaints about bad train-to-bus connections. Part of the 40 minute travel time is a whopping big wait at Carnegie or one of the other stations down the line (name escaping me right now). Ah well.

Personally I got around the complexity issue by thinking of it as 2 parts – the Brighton East section and the Elsternwick section.

The real problem of that route was that 2 out of 3 services terminated at McKinnon on weekdays which results in a 90 minute frequency for the Brighton East section. I hope they fixed that with the 626 and didn’t just extend that problem to Middle Brighton.

@JJ, there’s a certain amount of truth to that, though it’s probably not that black and white. Certainly the routes we have today have evolved out of what’s been there for decades. See this old post:
http://www.danielbowen.com/2006/05/04/pt-history/

@Carly, you shouldn’t have to do this, but might I recommend writing down the times of the various buses to Chadstone from connections along the Dandenong line?

eg 900/624 from Caulfield; 623/627 from Carnegie; 822/624 from Murrumbeena; 767 from Hughesdale (or it’s a 10ish min walk); or last resort Oakleigh, which is furthest away, but has a bunch of connecting buses. That way once you’re on the train, you can check your list and see which connection involves the shortest wait.

@Terry, the timetable hasn’t been published yet, but I understand it will be consistent, eg every bus going to Middle Brighton.

I probably should. The planned timetable is unrealistic and needs to change. Besides, if the bus chooses to wait it’s slack time in the middle of nowhere, it dooms itself to waiting in front of a red light for about 5-10 minutes.

Glad to see the the restructuring of Route 627 into two separate routes. Logically, Route 626 needs to be extended to a more meaningful trip generator such as Middle Brighton than at present. But it doesn’t help when we have people opposing any changes to a bus route: http://bayside-leader.whereilive.com.au/news/story/new-east-brighton-bus-route-sparks-protest/

The Department makes you ask to see the full review report, rather than just publishing it on their web site

You asked for it, have you received it?

I wonder if you can ask for it by email.