Twitter’s public. You don’t need a logon to see my Twitter feed. (It can also be made private, if one prefers.)

Twitter’s open. You don’t need to log onto a web site to use it. Thanks to a published API, Twitter has lots of different applications that can post to it, and you can also post via text message.

Twitter displays things in strict time order. Facebook’s News Feed does some weird crap with what it shows you, sometimes sometimes (and often annoyingly) showing you stuff from days ago, and seemingly hiding other updates until it feels like showing them. Which leads me into…

Twitter keeps its history, and it’s very visible. You can link straight back to that killer post. Facebook… well, I’m not sure I trust it to keep everything, because I can’t easily find it. (But given there’s always an inherent risk with keeping your data with external companies, I keep copies of significant posts myself.)

No offence to my Facebook friends, but Twitter has cooler people on it, publicly tweeting. In most cases you don’t need to go through the rigmarole of getting permission to watch their Tweets, so it’s easier to find and follow who you want. In fact it’s helped get me interested in Federal politics again.

Twitter doesn’t try to integrate every bloody app, and keep asking you for permissions to use them. Nor does it have overt advertising or keep making suggestions about things that will just waste your time. 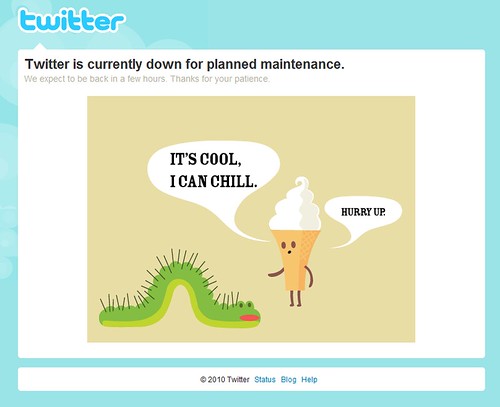 You can’t play Scrabble in Twitter. Mind you, those new adverts are pretty annoying.

How others see you

But Twitter also has Retweets, allowing people to pass on your comments to their followers, should they wish. Facebook doesn’t really have an equivalent to that.

How do others categorise me? Checking the lists, I show up as:

(I should add that although I dip into Facebook every so often, I am pretty strict there about only “friending” people I actually know in real life.)

Which do you prefer?

Hi Daniel great post. I too prefer Twitter. It’s just more fun, easier to connect with people you don’t know, and it doesn’t require a lot of hoop-jumping to get tasks done. Facebook is great for connecting with actual friends, but for networking and expanding virtual horizons, not so much.

After starting out as a bit of a sceptic, I’m a real Twitter convert.

I’m slowly getting rid of RSS feeds as I find I’m getting good feeds in my areas of interest by following the right people/groups/publications on Twitter.

The biggest benefit for me is that there is a much greater level of serendipitous information, alternative views and the like that opens the scope of what I’m reading.

Twitter is the one technology that makes me feel old. I just don’t get it. When I look at a twitter feed it mostly looks like gibberish to me. I never know if that the twitter owner posting, or someone replying, or what the heck is going on.

I’ve never had a Facebook page; in fact I’ve gone out of my way not to have one, sort of similar to some friends of mine who didn’t own mobile phones through the late 90’s/early 00’s (and 1 who still does not) …

Twitter is where it’s at for me. I’ve met and networked with so many people I would never have had the chance to without it.

It allows me to converse with people, both well known and not, who play a role in life outside of Twitter.

For me, it’s all about common interests:
I follow people who provide me with tweets about subjects I’m interest in; who have similar lines thinking; who post entertaining tweets; people whose ideas I find challenging or object to.

It’s also a way of meeting people online and IRL, who are followers or people I follow, and vice versa. Networking at it’s best IMO.

Twitter is very much about the ‘conversation’. The more you interact, the more you gain.

Twitter is like having a way of SMSing anyone you want to, and if they chose to engage in a conversation, great things can and do happen.

Who knew there could be so many freaking ‘entrepreneurs’ out there? It’s ridiculous.

I tend to block anyone who isn’t on there for the purposes of engaging: ie companies, blogs, API/retweeter bots, and any follow who isn’t a real person, such as API streams from news services or whatever…

-Open (anyone can see and follow you)
-Semi-protected (people can read your stream, but need to request to follow permanently)
-Protected (request-only to read/follow).

… and as a side note, I sometimes post on blogs, forums and sites in @twitter fashion just to annoy people a little… It’s the #smallthingsinlife eh… Sorry if it drives you nuts… :)

Nice post and yep Twitter is just a whole lot easier and I too am starting to ‘get it’. Facebook is seemingly more private and personal. And I agree it does do some weird stuff and seems to be getting more and more complex.

I like both for different reasons. Twitter is simpler, more private, and much easier to manage. What I like about this is that I don’t get a lot of email notifications in a day unless I commented or retweeted someone’s post. Unlike in Facebook, my email’s been flooded with games, events invites, tags notifications. I also don’t like the fact that people change their profile pictures at least once a week. I mean, how much have changed in your appearance in the past 5 days?

Facebook on the other hand is much fun to explore when you just want to find someone from you past, while Twitter can be boring as it can’t give you more info on a person other than his/her username. (hence, it’s privacy policy, which is actually good, but not fun.)

I do like what Twitter adds to shows like QandA and think they would be much poorer without the feeds, but other than that, I don’t get it. Sorry Daniel, while a fan of your blog, I don’t need to know what you’re doing/thinking every minute of the day (or what Ashton, Paris, et al. are doing for that matter). Immediate nature of Twitter communications is normally not necessary.

Buzz is easier. Yes, it requires a logon, but it’s a logon to gmail, which I’m always logged on to anyway, and it doesn’t have the insane twitter limits that force you to talk in retro-telegramese.