Every time your train is stuck inexplicably in a tunnel, every time a service is cancelled, the experience is not just eroding your quality of life. It is eating away at our city’s global competitiveness.

A power problem at Southern Cross Station has caused this, this morning: 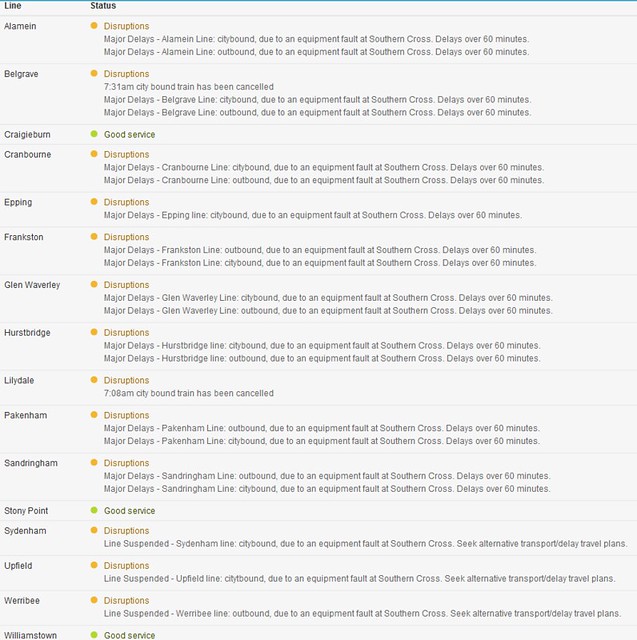 Update 9:15. I went to the station, quite prepared to turn around and go and work at home if the trains were up the creek. Not too many people were waiting.

Around 8:25 an express came through. Some bloody stupid woman ran in front of it on the level crossing. It missed her by metres. The driver stopped after passing the crossing — I wouldn’t blame him if he’d shut his eyes and wasn’t sure if he’d hit her. Then he kept going.

The 8:31 turned up a minute late, and got a good run into Richmond, where it filled up. Some delays in the tunnel, but arrived at Flagstaff 8 minutes late, not too bad.

Glenhuntly station carpark half empty, Dandenong Road not moving, Alexandra Avenue and Punt Road barely moving — I’m guessing a lot of people avoided the trains (perhaps unnecessarily) due to tales of doom and gloom and drove instead, causing problems there.

Update Wednesday morning: It should be emphasised that while my trip in was relatively, smooth, it’s obvious from reports from around the place that many, many people were severely disrupted. As compensation the government has announced all metropolitan travel (train, tram and bus) is free on Friday. V/Line passengers with a ticket valid yesterday can claim a free travel voucher, and Metropolitan holders of weekly or longer passes can also claim a free ticket (on top of the usual monthly compensation that will most likely apply).

Oddly enough, I had no problems getting into the city on the Sandy line this morning.
Judging by the lack of people at work yet, I’m the only one without a problem!

Upfield line was definitely suspended, despite the paper earlier saying “good service”, and the #19 trams were playing silly b*ggers around 8:30am — anything coming city-bound was chockers, and extra trams leaving from the depot (turning right from Moreland rd and heading for the city) were ignoring the 30+ people standing across at the stop on Sydney rd. The 8s were full pretty much immediately and there were no 1s in sight down Lygon St. It would only have gotten worse at shift changeover (in the next hour). Mad.

How would the Sandringham line have problems at Southern Cross when it runs direct to Flinders St?

3AW was reporting the Westgate et el roads were chockers and barely moving by 8am.
What a bloody stupid idiot!
Seriously, I wish they’d find a way to make these idiots pay a fine/do community service.
Install cameras at crossings, maybe?
Snap idiot drivers trying to beat the boomgates, too?

I don’t understand why our network appears so vulnerable to single-point disruptions. Surely the lines can be separated more such that a failure at any one point affects only one or a few lines, rather than knock out most of the system? And where there must be critical points, how do you let it get to the stage a “fatigue failure” happens right before peak hour, instead of replacing it at (say) 85% of its rated life and avoiding disruption?

@Dave, I think that’s a really good point. There is some work being done to better isolate parts of the network, but it can’t come soon enough.

The other thing they should probably look at is upgrades to allow trains to turn around at more locations; eg if Flinders Street gets knocked-out, currently trains can’t reverse at Richmond – it has to be done all the way back at Elsternwick, Caulfield or (I think) Burnley.

@Daniel. No Wonder My Bus Got Caught On Traffic This Morning. When regional drivers find out about problems why cant they terminate at North Melbourne or Latrobe Valley line at Flinders St. Why cant trains go through the city loop or stop at the outskirts of the city?

Mighty lord. Had one hell of a journey. Sucks that I had to deal with it this morning, but as you put it, “Metro is just the tenant”. Its wishful thinking to believe that the state will take responsibility for this. It’s not Metro’s fault they overlooked a leaky ceiling.

According to someone else there were no trains leaving Werribee for more than 2 hours in the AM peak. Considering that is 30km away from the section closed, it shows how centralised the operation of the system must be, on other networks it’d be unknown for no service to be operating at stations so far away from the actual disruption.