So, Doctor Who for 2010 (except the Christmas episode) has finished. I reserved judgement of the new crew (both the cast and the new producers/writers) until their episodes aired. They didn’t disappoint.

[Spoilers below for those of you who have not seen the end of the 2010 series yet.]

The Eleventh Hour — a nice bit of time-travelling from author and new Doctor Who supremo Stephen Moffat, similar to Girl in the Fireplace. The long time fans would have loved the closing scene clipshow, and it prompted us in my house to try Fish Custard the following week.

The Beast Below — interesting idea, a country on a spaceship. Loved new monarch Liz 10. “Basically, I rule.” The scene in the monster’s mouth didn’t quite gel; wouldn’t they have been sucked out into space? And the jump cut when they exit was to be the first of several jarring scenes in this year’s early episodes where you get the feeling they didn’t show some critical moment because they couldn’t afford the special effects.

Victory of the Daleks — throw two British icons together: the war-time spirit (including Churchill, the Blitz, and Spitfires) and Daleks. Some amusing scenes with the Daleks serving tea, but nothing really clever here, though I did like the “Hey! Paisley!” Is it a cynical view to think the new multicoloured Daleks were an invention of the merchandising department to maximise sales? Hey kids, collect all the colours!

The Time of Angels/Flesh and Stone — ooh yeah. Blink meets the Library. River Song (and the crash of the Byzantium, originally mentioned back in the Library) and the Weeping Angels, with armed-to-the-teeth clerics thrown in. Great stuff, and genuinely suspenseful, with an Angel emerging from the video footage, and the crack in time revealed to not just be an in-the-background-until-the-end-of-the-series trope, but instead directly confronting the Doctor. (But again, the jump cut onto the roof of the Byzantium at the start of the second episode.) 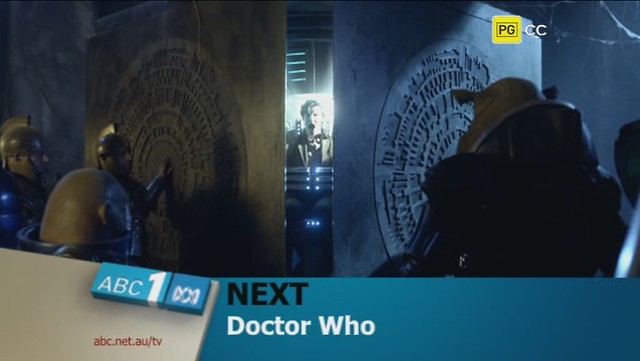 Vampires in Venice — an enjoyable-enough romp, but no clever plot or new ideas. Apparently filmed in Trogir, Croatia, where the Veniteans settled and there is still Venitian architecture untouched by the ravages of tourism. I think the idea of the aliens wanting to shut down the city was too far understated, as most of the time it appeared to be thriving, not a threat. Loved the Rory/Francesco sword fight and the Doctor’s library card.

Amy’s Choice — given it was written by the author of Men Behaving Badly, maybe it should have been subtitled Pensioners Behaving Badly. It was something a bit different, and one’s left wondering who really was the Dream Lord — was the Doctor’s hypothesis correct, and will he show up again? (Another jump cut when the Doctor blows up the TARDIS.)

The Hungry Earth/Cold Blood — gotta admit, despite the return of the Silurians (from circa 1970, and again in 1984), this one didn’t really grab me. Until the closing few minutes. Whoa. Not only did they kill off a companion, they twisted the knife extra hard by completely removing him from time. A genuinely surprising moment. I was left wondering if the series finale would somewhow revisit this.

Vincent and the Doctor — RomCom King Richard Curtis’s episode. It could have done without the invisible chicken, but the portrayal of Van Gogh’s depression was uncharted territory for the show, and handled well, I thought. The emotional closing scene grabbed me, too.

The Lodger — more Doctor Who meets Men Behaving Badly. Some very funny scenes with the Doctor trying to fit in with the humans (spot the number 11 on his jersey?). Actually, I wonder if the soccer element was cunningly put-in as a World Cup tie-in. The Confidential (making-of) episode had some very funny footage of James Corden (Craig) telling the audience that actually Matt Smith can’t kick a ball at all; it was added later with CGI.

The Pandorica Opens — ooh yeah. Stonehenge. (The real one, no less, at least for some shots.) Big heapem monsters. River’s back. So’s Rory! But he’s not. Ho boy, a climactic ending.

The Big Bang — Some fun mucking about with time. Fezzes are cool. The suspicion that the moment back in Flesh and Stone where the Doctor “incorrectly” appears wearing his jacket was actually a hint of things to come was proven right. Really loved the use of Something old, something new… at the end; it had me virtually punching the sky (in my mind at least). Good stuff, with only a slight groan when they hinted at what’s in the Christmas special — sounds like previous producer RTD‘s Titanic again.

All in all, some great moments, and yes, I think Matt Smith makes a good Doctor.

By the way, producer/head-writer Stephen Moffat is now on Twitter.

Oh, and well-done ABC1 for managing to air this year’s episodes within a fortnight of their BBC1 broadcast. It rated quite well for them, at just under a million people each week, their top-rated programme most Sundays… and an outstanding result for a scifi series.

Think the ratings are even more amazing considering it’s directly up against the Masterchef Juggernaut. Putting it on a sunday night is the best thing the ABC has done for the new series (I don’t think it did particularly well on a Saturday night).

On the issue of authenticity, there were some serious historical inaccuracies concerning Stonehenge in “The Pandorica Opens”. I was yelling out about them and driving Louise bonkers! (As I always do when I keep telling her that somewhere is actually Cardiff and plainly not London or Mars or whatever!)

I’ve found the series overall a little too “dark”; sometimes it felt like I was watching “Torchwood”. I also miss the large cast of semi-regulars which have characterised the series since the days of Christopher Eccleston and which I enjoy very, very much.

But that said, I *do* like Matt Smith and I have to keep reminding myself that he’s not at fault for “not being David Tennant”. and Amy is a great companion.

The thing I love about “Doctor Who” is that the format allows you to tell any sort of story whatsoever! It is the richest, most imaginative show on television, and great fun to boot. The 2010 series had some quite delightful images and ideas – and the way the writers can play around with your expectations is magical.

I was really waiting to find out what you thought about this year’s Dr Who, Daniel. And I think that we pretty much agree. Matt Smith works very well, which surprised the hell out of me. I didn’t find the cuts are annoying as you, though. I am very, very glad that Dr. Snog is back. I just wish that Sally Sparrow could be but I suspect that Carey Mulligan is unlikely to find the time to fit in Dr Who episodes right now. Finally, I think that Moffat handles series closers a hell of a lot better than Davies. With Moffat it was still large scale but it was handled far more subtly and with much more humour. And as a hard core scifi fan from way back I like the weird places Moffat takes us to. More weird places, please.

you guys are all nyerds! :)

Daniel, a Dr Who question for you. How old were your boys when you introduced them to Dr Who and do you think it was the right age? I ask as I’m wondering how old my daughter will have to be before I can introduce her to him.