Melbourne’s Comeng trains date back to the early 1980s, about the same time us Gen-Xers were cutting our video game teeth with Donkey Kong and Space Invaders. 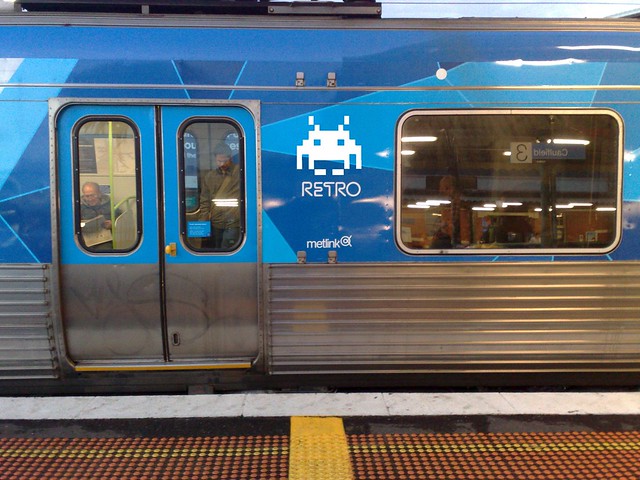 There’s certainly other things of the 80s around the place on the train network, for instance this sign on a now unused gate at Caulfield Station. (Since then we’ve had a new Met logo, then Bayside Trains, then M>Train, Connex, now Metro.) 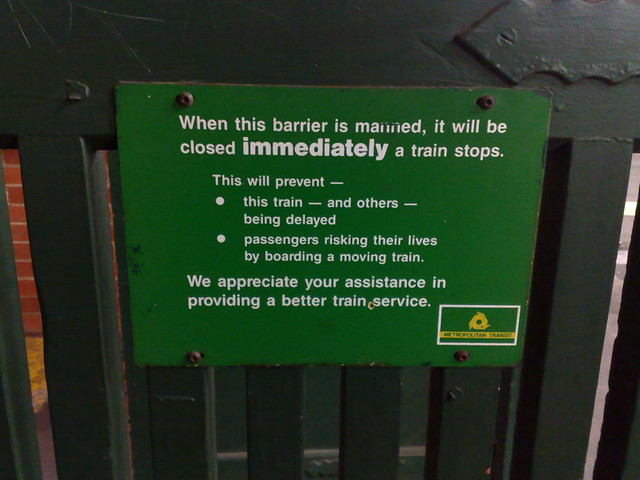 Something else Metro have done that harks back to days of yore is to put staff back on busy platforms. While I was surprised to see Sydney rail staff waving a flag a few years ago, here they’ve been given high-tech looking paddle devices (the other side has LEDs that stand out to the train driver). 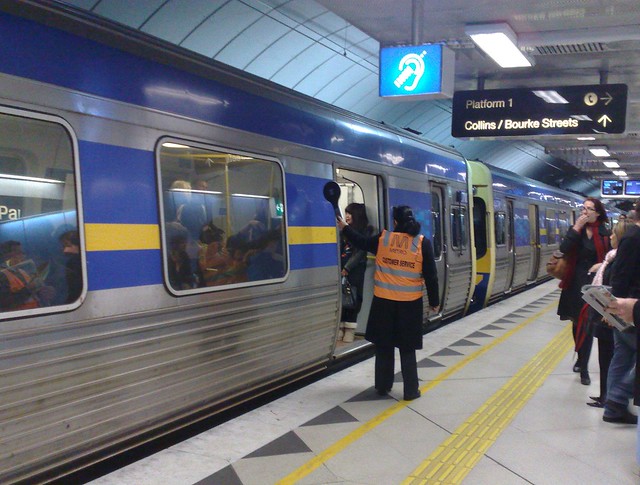 On a very similar subject, check out the cartoon by Shelley Knoll-Miller that was in The Age a couple of days ago. (It’s the one with the caption “Train Station Improvements”; as I write this, it’s the second cartoon from the top.)

I really wish the first pic wasn’t modified; that it was the real deal. Sticker art like this makes the mundane far more amusing, without any real harm…. (but that’s another debate).

Speaking of the ’80s, on the weekend went to see the A-Team movie- EXCELLENT!! Rounded the long weekend off by playing Commodore 64 games, on emulator of course, but still have the old beast packed up in the shed!

With the new timetable on the Dandenong line, ‘down’ trains in the afternoon now use Platform 3 at Oakleigh after an absence of many years (thus allowing a few to terminate at Platform 2). Noticed one of those 1980’s Met stickers still on the long unused ticket window at the entrance to Platform 3 just last week!!

Love the cartoon Bonnie. But where are the Myki-coloured people who stand around doing nothing and looking vaguely embarrassed?

Half of all comeng trains=Half Alston and Half EDI should be replaced by the next generation trains that are comming in coming years.

Kind of off topic, i was in Sydney over the long weekend

1. The Powerhouse museum has an ’80s exhibit that, frankly, was a little too familiar and recent for my liking! They had a computer section which reminded me I used to have a cassette tape ‘drive’ for my Commodore 64! The sound when you die in Frogger was also scarily familiar.

2. Travelled about by train (on the lilac inner west line) and was fortunate enough to get new or refurbed trains most of the time. Couldn’t believe how much quieter they were than Melb. My friend suggested they travel slower, which may be true as they are double storey but I didn’t even feel much vibration through the floor. T’was a much smoother ride. Mazda 121 versus a Jag.

@shell Its the narrow gauge….

I liked the big “eat a dick metro” written in 3-foot high letters graffittied on one of the billboards at South Yarra station, good to see they are getting through to the kids.