Found this on a train this afternoon: 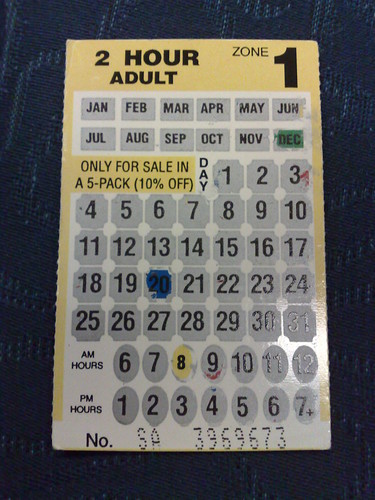 I’m guessing a bookmark that’s been sitting inside someone’s book for fifteen years and they decided to re-read the book, and subsequently left it behind on a seat.

These scratch tickets were used before Metcard was introduced in the late-90s, and were notorious for fare evasion. They didn’t indicate a year (so some people went to the trouble of keeping them and using them on the same day each year). And because they were self-validated, some people kept them unscratched and only scratched them when they saw ticket inspectors.

16 replies on “Blast from the past: found on the train”

I wonder if you had an unscratched one whether it would still be considered a valid ticket? (not that I do!)

Dare you to keep it til December 20 Daniel and see what Metro staff do when you try to use it ;) A future blog post :)

Someone must have seen you coming and planted it to incriminate you. It looks to shiny to have been a bookmark for 15 years.

i’m glad you, of all people, found it!

Boy, those are a blast from the past! Still remember using those tickets back in the day! I remember they ditched them after a year, and went back to the original paper tickets! Was quite fond of those paper ones- used to fold them into mini-accordions and mini-frogs while waiting to be let out of class!

Who was the Minister who turned honest old ladies in fare evaders who would not scratch their tickets unless they had to? Was it Snappy Tom Roper? Or perhaps Jim Kennan. The chemist at the corner of Chapel and Commercial Roads was picketed because they were selling ‘scratchies’. Great find. I have a few old ones.

@Nathan, IIRC these tickets were officially retired around 2001, and were declared at that point to no longer be valid.

@enno, yeah for an old ticket it’s in pristine condition, which is why I suspect it’s been sitting in a book or somewhere else safe for all that time.

Betcha the old scratchie would scan better than my Myki did (didn’t do) this morning!

I found one at home the other day. It instigated a nice discussion about public transport.

How appropriate that you found it.

I have a bookmark from 1995 – yep, 1995. It’s a bumper sticker from ABC Darwin (an overhead fan is the logo). I was supposed to stick it on the back of the suzuki to win a prize but it’s been inside whatever current book I’m reading ever since.

I’ve never heard of anyone keeping a whole year’s worth of scratchies in order to “recycle” them the following year. But I did have a colleague at the time who recycled them each month. I knew this because he bragged about it.

He bought 31 tickets, and scratched a different day off each one, but didn’t scratch a month. When presenting the ticket to a tram conductor or an attendant at a railway exit, he’d just put his thumb over the unscratched month section. “They only look at the day,” he said. He must have been right, because he was never caught. And since he was a well-dressed businessman projecting an air of confidence, rather than someone scruffy-looking and nervous, the inspectors he encountered, who might have been expected to examine tickets a little more closely than conductors or gate attendants, obviously never did.

He’d tell us (his colleagues) about this, trying to impress us with how smart he was in devising a scheme to outwit the system. My opinion of him? I’ve been buying yearly tickets for more than twenty years, and I’ve never evaded a fare in my life. I think he was just a scumbag.

I was no fan of the scratchie system, any more than I am of metcard vending machines or of myki. But there’s a vast, vast difference between being critical of a system that makes it hard for honest people to buy a ticket, and going out of your way to evade a fare.

The Youtube vid was amusing, mostly because of Mr Mees’ hair, depressing but very much giving a sense of deja vu.