You want to know why Melbourne’s trains are so crowded?

Well, that might be because in the last decade, patronage has gone up 77%, but services have only increased by 17%. 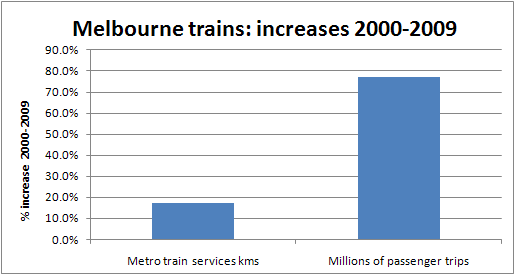 And the trams too?

Just for completeness, here’s a graph of all the patronage figures from 1999-2009. 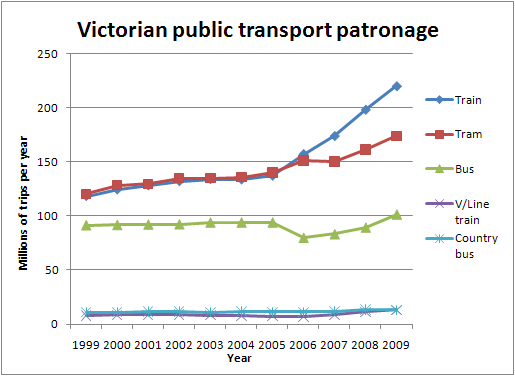 Source: Victorian budget papers, 1999-2009. (The 2006-07 papers say the methodology for calculating metropolitan bus patronage was improved in that year, implying the figures for previous years were inaccurately high, rather than there being a sharp decline in passengers.)

Daniel
very interesting charts – thanks.
Has the increase in train patronage been uniform throughout the day (and across weekends) or has the increase been concentrated in peak times? If the latter, then that compounds the crowding issue.

It’s been sharpest in peaks (see these graphs) but growth has also happened right throughout the day. Remember, only a few years ago most services on weekends and midday weekdays were short trains — now they’re all 6 cars, apart from evening services on some lines.

If you look at three decades, certainly for trams, services have declined considerably but I suggest trams are now carrying more people than back then.

I can believe the figures. I normally use the Frankston line reasonably early (7am to about 7.40 am) and get a seat most days, but had to spend some time at Caulfied this morning. When I then boarded a Dandenong line train to finish my joutney into the city at about 9.30 am it was sardines!

I’m often surprised by the number of people travelling at slightly odd hours. There were plenty of people on a train I caught arriving the CBD at 7:30am on a Saturday ex-Lilydale a few weeks ago.

It annoyed me when I last used the Dandenong line that there are two trains a few minutes apart to Pakenham about 2:50pm, one which returns express not-in-service from Pakenham to Flinders Street so it can form another outbound trip, the other as a stopping all stations train.

Had to watch the express fly past while waiting for the very slow all stopper which is actually overcrowded with the number of people travelling INTO the inner city at that hour.

I think we are ready for the 4 Carriage Double Deck Millennium trains from EDI
Features
.Driver Controlled doors
.Plenty of seats
.Clear and big route boards
.Emergency Exit for Driver
.No need to make them into 8 carriage

As mentioned above, even now some services on the Alamein/Belgrave/Lilydale lines are only 3 cars at certain times in the evening, but I see them going by and they are regularly packed to the rafters. I’m not sure they can get away with doing that for much longer, but hopefully as more of the new trains come online they won’t need to any more.

@Phllip: the Millennium Train is already the previous generation – Downer/EDI’s Waratah is supposed to be on the rails this year. You could probably make a 6-car set out of it, but the remaining issues with adapting Sydney trains for Melbourne remain: narrowing them reduces interior space, it’s difficult to make the necessary height reductions, and they need long dwell times. It may be possible to run the Waratah without guards, as it has exterior cameras allowing the driver to see the length of the train. Sadly, the bodies of the Waratah carriages are being built in China. (Also, running a train named after the floral emblem of NSW in Melbourne could get you lynched.)

Upfield line is usually short in non-peak, mid-week and weekend and not just at night. It’s not very crowded then, though.

Vas, Wikipedia has a good article on the Waratah trains. Looks like the seating capacity is about 65% higher than a Melbourne 6-car train; it’s not clear how the crush load would compare.

Double-deck designs are not looked upon favourably by Metro or the Department of Transport in Victoria because of concerns over platform dwell times.

Flerdle, that may be changing, if only for convenience of operation. I’ve seen or been on some 6-car Upfield line trains recently in inter-peak or weekends

When any of the station platforms in Melbourne are trying to run 20 trains an hour through them, then you can worry about dwell times. This issue is the current fashionable red herring. Trains with plenty of seats means less people crowding around the doors which means less dwell times at all but the busiest stations.

Most of the City Loop platforms already run at 20 or more trains per hour in peak. (All tunnels except Clifton Hill, I think.)

OH. Thanx Vas. I did not know that. I will remember now.

The country trains are also overcrowded. But that’s because city people can use the trains within metro stations. Please stop this. I think more country trains should be introduced for Warragal,Seymore,Melton, Geelong and Sunbury .