The City of Glen Eira has some pretty psychedelic playground equipment in some of its parks. Sometimes it’s hard to figure out what you’re meant to do with it.

This one I don’t think many people would have problems with. You get on and it spins around, alarmingly fast. Pretty easy. 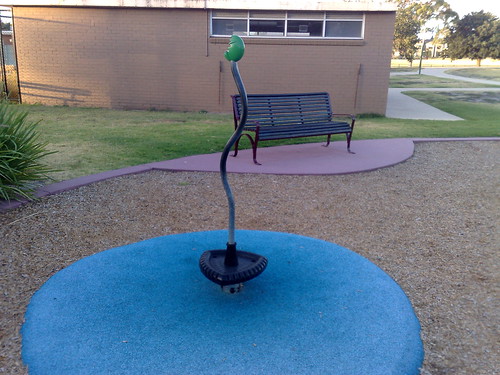 This thing however, reminds me of two miniature monorails, but appears to involve “surfing” the board things while holding onto the railings. You can also try and sit on them and ride them, but that doesn’t appear to be how it was designed. Though I’m not really sure what they had in mind. 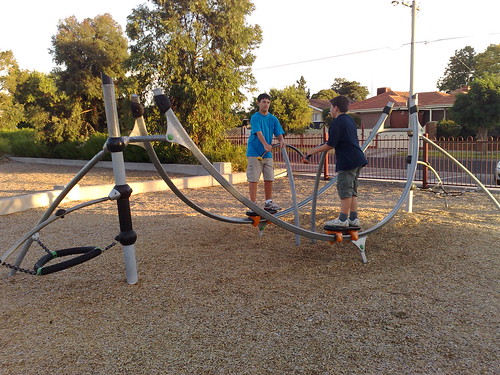 This one is obviously inspired by a Mobius strip, and is quite a challenge (in a good way) to climb. We noticed it’s made from four identical pieces hooked together. 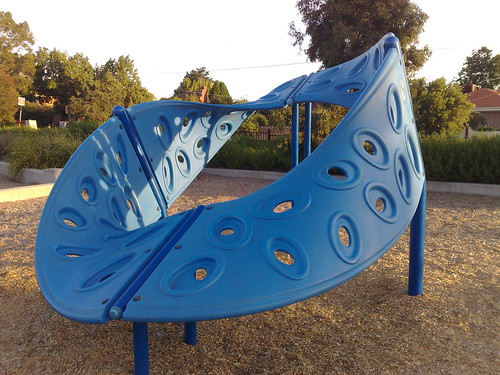 And as for this, Escher couldn’t have done better with the ladder. The middle bit is like a rock climbing wall, but impossible to actually use. The slide thing is hinged and wobbles from side to side. Weird. 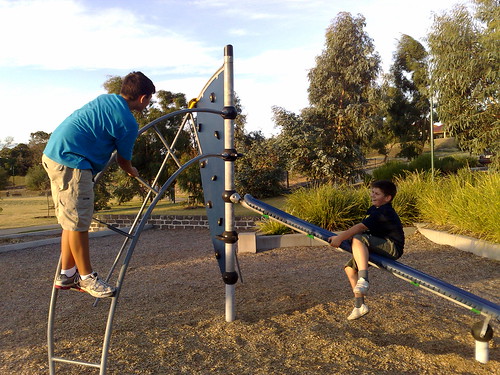 (Elsewhere they have equipment that is easier to figure out, and more suitable for little kids.)

12 replies on “The psychedelic playground”

Much nicer shots of your neighbourhood! Very arty playground. and the kids seem to like it, too.

Knowing what some patrons of the Angel Tavern used to do in Caulfield Park (and others thereabout) after a skinful I’d say the council were smart enough to sex-proof the play equipment!

Had no idea that thing was called a Mobius Strip. The first thing I thought of was a strip tease involving the Brain of Morbius. Not sure how that would work… ;)

It might be inspired by a Mobius strip, but it isn’t one – the double twist means that it has two sides!

If drunken people consider those sex-proof, they just aren’t using their imaginations.

There is an almost identical assortment of equipment, as shown in the bottom pic, we discovered on the beach reserve in Mentone. We had great fun climbing up the slide, and managed to cause ourselves injury trying to come down. Indeed – that rock climbing wall is bewildering. Unassisted it is impossible to negotiate by anyone of any age.

We also figured out the spinning thing there – the more you pull yourself toward the centre, the faster it goes. Wow! Love your work Daniel cheers.

The first two appeared in some form in the Box Hill Gardens about 12 years ago, supposedly designed for older children. That blue one is just weird and probably another case of design over function.

The top one is a demonstration of conservation of momentum and the importance of centripetal force. Stand on it while sticking your buttocks out as far as you can and spin it up (or get someone to spin you around) – the faster the better. Pull your bottom in as far as you can. The further you pull your bum in, the faster it spins and the harder it becomes to hold on. It’s great fun! (Until someone is thrown off violently, or throws up from motion sickness.)

That wankel-rotor shaped twirly thing almost killed me a few months ago. Started spinning and I could not get off.

Ah, that first piece of equipment was at a park near one of my old houses.
And the blue covering around it looked exactly the same, only every so often, a particular corner would have a stain… a sick stain…

Gee you just seem to be missing “The Yellow Peril” and then you would have a complete play set! =)