One month of Myki

COMMUTERS are ignoring Government advice and are using myki cards on trams as well as trains.

…
(Jean Ker Walsh said) ”Myki equipment on trams is turned on for use by testers and system auditors,” she said. ”Everyone else on the tram should have a valid Metcard.”

— The Age, Caution urged for travellers who take the myki on trams 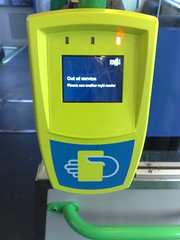 The Myki scanners on the trams (those that work, anyway; I saw lots yesterday that aren’t) are sitting there like everything’s fully functioning, asking you to touch your card.

How about if they said “Testing only” or “Valid for authorised testers only”? How else are people meant to know? Or even notices on the trams that say so? Would that be so hard?

MYKI has been in operation for a month and the verdict is to keep using Metcard for as long as you can.

The Public Transport Users Association has advised commuters to stick with the old system until all myki’s bugs are ironed out.

I know some people are using it and like it. And I think on trains, it’s probably 90% there.

But there are enough problems with station gates being slow or unresponsive that it would cause utter chaos if everybody was using it.

Not to mention the problems with over-charging, or most seriously, payments through the web site just completely going missing.

One of my neighbours summed it up best when he said to me that he paid money in and it just vanished. He rang the call centre.

“Yes, we’ve heard of a lot of problems like this.”

Apart from the system faults, even basic stuff, like putting a Myki machine in every station, hasn’t been done. 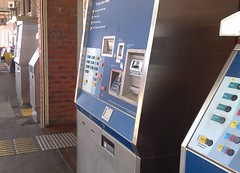 I was at Frankston station on Monday. One of the busiest suburban stations, it has five Metcard machines, and NO Myki machine. Even if space was a problem, why on earth couldn’t they have taken a single Metcard machine out so there was at least one Myki machine?

“We are continuing to advise passengers not to use Myki, but to stick to Metcard instead. By all means get a Myki card while they’re offered for free, but stick it in the drawer for a few months until the system works properly”

That page has a long list of problems found in just the first month of operation in Melbourne.

Like I’ve said before: Don’t use it unless you’re looking for trouble. And whatever you do, do NOT pay any money into the web site.

22 thoughts on “One month of Myki”