Here’s an inconvenient truth of ticketing: Installing brand new smartcard systems, even established ones from elsewhere, is perhaps not as cheap as one might think.

Some have said instead of developing Myki, Victoria should have bought an existing system like Hong Kong’s Octopus, or London’s Oyster. 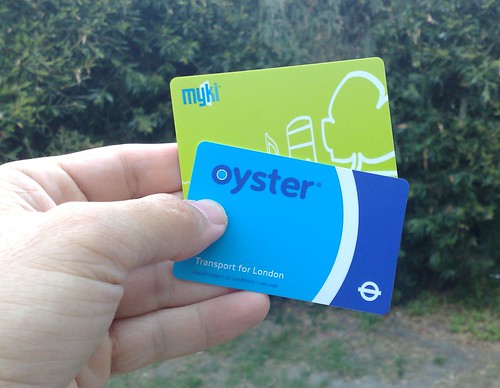 The government (TTA) claim you can’t do this. But Auckland is doing it.

Auckland is buying HK’s Octopus. It’s costing them NZ$47 million in capital costs, and is rumoured to be in the region of NZ $65 million for ten years of running costs, so a total of $112 million for the first ten years (about $90 million Australian dollars).

Then I looked at how big the Auckland public transport system is.

If one assumes that the amount of infrastructure and fleet size (and the amount of ticketing equipment that has to be installed) is closely related to patronage, how does it stack up?

Melbourne’s total patronage for the year ending September 2009: 494.5 million trips. But Myki covers most of regional Victoria too, so you’d have to add 13.2 million V/Line trips, and an unknown (well, I couldn’t find it via a quick search) number of trips on regional town buses. Let’s say a total of around 510 million trips per year, 8.7 times that of Auckland.

So if Auckland’s adoption of Octopus was to handle 8.7 times as many trips, and perhaps cost 8 times as much, it would come in at $720 million for ten years. Perhaps not quite the bargain one might think.

Though still a lot cheaper than the $1.35 billion Melbourne’s Myki will cost for ten years, in fact it’s a little over half the cost.

And because it’s a mature technology, I’m betting it’ll be a much smoother introduction than Myki’s having.

PS. Some people believe the cost of ticketing and fare collection barely covers revenue. This isn’t true; in Victoria public transport fare revenue is around $600 million per year, and growing. Doesn’t mean it can’t be collected more efficiently though.

PPS. Hold off on your comments on your Myki experiences… I’ll post on that in a couple of days.

13 replies on “These things aren’t cheap”

Funny how many cities’ transport cards are named after marine creatures (oyster, octopus and Wellington’s snapper).
I’ve been using Myki on trains this week without a problem. But the website still has me listed as zero credit, instead of $50.

Oyster is named after Shakespeare’s saying “The world is your oyster”.

Oyster, octopus and snapper…like a bad pub’s fisherman’s basket it costs the earth, is bulked out with the crappy bits and spruiked to be better than it actually is :P

I was surprised/disappointed that more places didn’t use oyster-type ticket systems. Where I live in the West Midlands in England there is certainly a large population making a lot of public transport journeys. It would make my life much easier if they operated such a pre-pay system.

Since reading your post and seeing how expensive these systems are, it maybe isn’t such a surprise that they aren’t more widespread.

Won’t say a word yet Daniel, but the comparison you make is interesting, at least we haven’t been completely ripped off… or have we? :)

Don’t forget to build in the cost-overruns that these systems inevitable seem to have. Let’s compare when the system is in and running successfully….

I have just been to Auckland.

They do not have integrated multi-modal ticketing. Installing Octopus there will be more of a revolution than myki is.

To get from the CBD to the North Shore beaches (Takapuna) cost me $3.20 NZD (AUD $2.50), which I had to pay on both trips there and back. Forget zones etc. The ‘stages’ used to calculate the fares are about 5km in length.

The bus operators themselves are responsible for ticketing. Some have smartcard (the gold chip kind) cards, others have rolled their own contactless system by installing the Wayfarer consoles used in Perth (the model without the touchscreen inserted for myki).

You have to tell the bus driver where you are going – no default fares, no 2hr, no daily cap.

In a city without Trams and not as extensive rail, the bus use is much higher than Victoria.

I read with interest that Wellington’s Snapper card company wants to make an assault on the Auckland bus market despite the fact that Thales/Octopus was awarded the contract.
Apparently Snapper is a private company that hasn’t taken a cent of taxpayers money – good on them.

p.s Have you extrapolated hardware costs into that figure? 17,000 devices aren’t cheap, even if you don’t need to pay as much hardware R&D costs – which we probably have done with myki despite the devices now being available off the shelf from the manufacturer.

The difference with the Octopus system (at least in Hong Kong) is the fact that it is also accepted at many outlets. You can apparently use it to pay for your Macca’s, pay for parking, pay for your pharmaceutical needs, pay for restaraunts, shopping, 7/Eleven, and the list just goes on (50,000 readers at 2,000 service providers). It is also used for marking student attendance.
You can probably expect that merchants who choose to acccept the Octopus card aren’t doing it for free – similarly like EFTPOS, they’d probably be charged commissions.
If we had a decent enough system which could be used as a payment card, wouldn’t the commissions raised from it pay back the costs of building the system (or at least offset it by a little bit)?

Singapore’s system (which is about the same size as Melbourne) cost S$135m, a lot cheaper than Myki’s $850m (capital costs).

I think a lot more scrutiny is required about the cost of the system, because there seems to be some outrageous differences in costs (with Melbourne being at the expensive end, of course); alternatively – how did Perth and Singapore manage to get theirs so cheaply?

People have pointed out that Perth has a lot less hardware per platform (only a few stations have top-up machines, etc), but I feel that’s far from the full story.

@Mike, there’s nothing stopping the Midlands authority from having paper monthly tickets, or the type of tickets that National Bus used to have in Melbourne. Prepaid system, cheap!

@everyone, I still think they should have used Metcard’s Yellow Dot – YES! The existing system has prox-card capability. They say those smart cards are more expensive, but surely not $850m more expensive? And I’m pretty sure a big contract from the Government would’ve make any End-Of-Life issues go away.

I think we were sold a lemon.

Does anyone have a breakdown of the costs? I’d like to know exactly why it cost $494 million – where did that money go?

Daniel, you’re assuming the costs should rise linearly with the number of trips taken. I’m not sure that this is the only factor (or even the main one) contributing to the costs.

@Mathew, a lot of the hardware used for Myki is bought from other suppliers; it’s the software which seems to be all custom-written.

@Jon, they’ve said $494m design and build (See this official article) plus a later $350m added for more equipment (it’s not clear how much, nor why this was not scoped originally — it would have to be a huge amount of gear), plus the $500m over ten years running costs.

I’m not aware of any publicly available breakdown of the $494m.

By the way, it’s been pointed out to me that the Auckland press release specifies “Octopus will supply the core central clearing house system”, implying they’re not just installing exactly the same system as Octopus.

I saw in the newspaper once that to get more credit on your myki it is $10 or more.