Got back yesterday from a few days in Inverloch. We rented a house near the beach with my sister and her family.

Drove down as sorry, but even V/Line’s new improved services only provide 3-4 services a day. Anyway we had lots of stuff to carry. Stopped at Korumburra for lunch at the Kelly bakery (not sure what Ned Kelly’s link to Korumburra is), and checked out the tourist railway but didn’t ride on it.

Then onward to Inverloch. Drove around the town looking for the supermarket, which we found eventually. Very crowded with fellow holidaymakers. We stocked up on stuff and then headed for the house.

Quite nice and comfortable, if a little basic. One toilet was a stretch for so many people. Isaac ended up on a mattress on the floor, but seemed to get used to it. No actual dinner table — just an island kitchen bench with not enough stools, so the adults got used to having meals standing. And a TV which was tiny and had no proper antenna, and was therefore unwatchable. I was glad I’d brought a radio to be able to listen to the news and the cricket.

But these minor issues were forgotten when we found the slot car set in the cupboard.

After settling-in we strolled down to the beach (about 10 minutes walk). It was a little cold, but very nice. The kids kept themselves entertained by wading in the water and scrawling pictures and words into the sand. 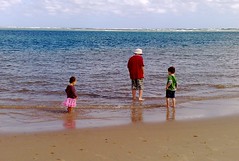 Strolled back and Adrian (genuine Italian) cooked us all pasta. Yum. Then we had a go of RoboRally, which took some study of the manual. I won, perhaps reflecting that I was the only participant who had played previously, as veteran rallier Marita decided she wanted to just watch.

Spotted a huge huntsman spider in the bathroom just before going to bed, but happily didn’t see it again all week.

Went for a nice long triangular walk down to the beach, along the coast into the town then back to the house. Seemed to be plenty of people about, and (for whatever reason) I snapped a few moderately entertaining signs with unfortunate pictogram men falling off cliffs and being carried away by strong currents. 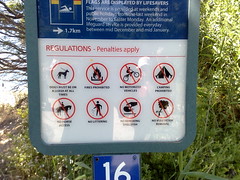 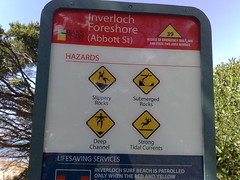 After some lunch we did the slightly amusingly named Screw Creek scenic walk up to Townsend bluff, taking a few wrong turns along the way. It’s one of those scenic walks where it turns out the best view isn’t at the proper End Of The Walk, but about 200 metres back down the hill. But oh well, there was some interesting stuff to see along the way.

Adrian fired-up the wood-fired barbecue in the evening and we feasted like kings yet again, before a game of Cluedo.

Into the car (we must have made an amusing little convoy, my sister’s Golf and my Astra, carrying four people each and both with matching orange “More trains = Less traffic” PTUA stickers on the back), we went for a spin down the Cape Paterson Road. Lots of glorious views of the sea, and after a stop at some place called Eagle’s Nest (great view of the cliffs) we took a look around the State Coal Mine in Wonthaggi.

Some really interesting stuff around the mine — it’s free entry to the surface exhibits. Time and the presence small children prevented us doing the hour-long mine tour (for which there is a charge); maybe another time — if it’s half as good as the one in Bendigo, it’d be well worth while.

The lady behind the counter recommended lunch at the Caledonian hotel in Wonthaggi, and sure enough their BLT burger went down a treat. Then we headed back to the house for a rest before hitting the beach.

The promised beach weather never quite eventuated, but it was nice enough for some paddling, sand-castle building and beach cricket, before home made pizzas for dinner. Yum. Followed by another game of Cluedo, and a quick go of the telescope the kids got for Christmas, though not many stars were out.

Time to head home, but beforehand a ride on the South Gippsland Tourist Railway, from Korumburra to Nyora and back in a 1950s diesel railcar (apparently once used on the Adelaide suburban system). It’s a bumpy old track, but some great scenery along the way, and my nephew Leo was thrilled to be able to watch out the front window to see the track ahead. 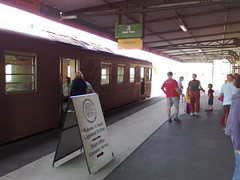 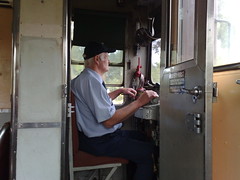 After lunch, back to the car and the drive home to the big smoke. A nice little relaxing break.

10 replies on “A short break in Inverloch”

How many people did you go with Daniel. Where is Inverloch? My family and I are going to Ballarat on Sunday.

[…] This post was mentioned on Twitter by Daniel Bowen, william gutierrez. william gutierrez said: A short break in Inverloch : Diary of an Average Australian: But these minor issues were forgotten when we found t… http://bit.ly/7AfafE […]

Great part of Victoria. I have many childhood memories of holidays in the area.

Inverloch is gorgeous. We spent a few days there a couple of years ago.

I know someone who did that mine tour recently. They found it a rather curious thing and told me they’ve introduced all sorts of OH&S precautions there now – they had to wear a hard hat for example.

Can’t remember if the PTUA supported it or not when it was an election promise, but when you rode that train were you thinking “I wish V/Line ran here a couple of times a day”?

Seems Rose is still scattering herself throughout time and space :)

Our family used to go over to Inverloch during the summer holidays every time it hit 40 degrees or over. One time a thunderstorm chased us back from the beach and we had to go back to a friend’s house we knew as lightning nearly hit the car.

Surely the safest place to be in a lightning storm is in a car?

“my nephew Leo was thrilled to be able to watch out the front window to see the track ahead.”

One of the nice things about travelling by train in Japan is that a front carriage usually (not on the shinkansen (bullet train)) usually affords you a view of the track ahead. I once took a friend on a trip on Tokyo’s Yamanote line that circles Tokyo, all the while looking through the window to the driver and the track ahead. The driver, in full uniform, cap and white gloves, complete with trad-fob watch placed in a holder on the control panel, would, before setting off from each station, point to the green light (as they have to do) signaling the approval to move forward.

Japan’s rail system is (except for the minor glitch and major catastrophe) very cool.