Connex took over running the Caulfield and Northern group lines on 18th April 2004, and to mark the occasion they put up a Welcome to Connex banner at Caulfield station. Evidently from day one, things didn’t go entirely to plan. 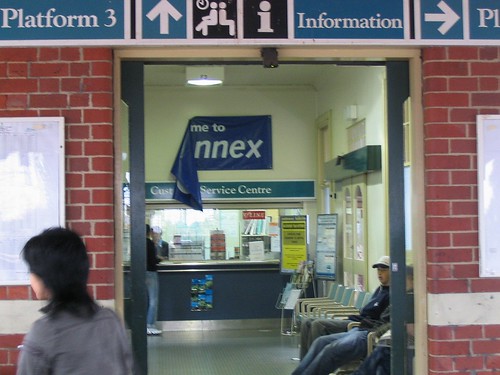 Over the past five years they’ve seen the strain of record numbers of passenger trips, with little government investment to help manage it, as well as reliability problems including the Siemens brakes crisis of 2007, the summer failures of 2009, and more than one trying day of disruptions from storms, as happened yesterday afternoon.

And so on Sunday night, we bid them farewell, and once the last Connex service (ironically a bus replacement on the Werribee line) has finished, say hello to Metro on Monday morning.

(And on the trams, it’ll be a switch from TransdevTSL to KeolisDownerEDI Rail, but keeping the Yarra Trams name.)

What will be different? Most staff will have new uniforms. Sounds like all the automated announcements will be quickly changed, and Connex logos may disappear under temporary stickers, before being properly replaced over the coming months.

But the timetables will be the same. The trains, stations, track and signals will all be the same, save one train fully decked-out in the new colours. They’ve got some reliability targets, and say they’ll staff some more stations, but other than that there’s not a lot of detail yet.

Over time I guess we’ll see more changes. Metro won’t be able to perform miracles with the fleet and infrastructure, as that’s the government’s responsibility, but there is scope to keep enhancing maintenance practices, disruption and incident handling, cleanliness, customer information, and various other operational stuff.

Hopefully they’re up to the task. Good luck Metro!

My video of a day on the trains, from the final months of Connex Melbourne’s operation:

Update: Something of a farewell present — Connex is paying compensation to monthly and longer ticketholders for October and November due to late-running.

Let’s hope they ditch that deeply irritating habit of referring to us as ‘customers!” But somehow I doubt it…. ;-(

Don’t forget those Harry Connick Jnr ads. “Hillside Trains has changed its name to my name. Connick’s. But it ain’t spelled that way!”

Is it true that with Myki we’ll be charged the same on public holidays as we are on weekends, i.e. $3 for all day on the network?

Good riddance, Connex. Mind you, I’m not confident that Metro will do better, although I hope I am proven wrong.

Frankly, I wish the Public Transport Corporation was reconstituted. In it’s final years, it’s reliability record was no worse than Connex, but being a government agency without a profit motive, was a lot cheaper to fund. Whilst free-market systems can provide the ultimate initiative to deliver a good service, it never worked with Connex.

I think my most-memorable Connex moment was about 2 years ago, when I politely asked why a service was cancelled and was told bluntly to “fuck off” by the staff member concerned. Ah, thanks for the memories, Connex…..