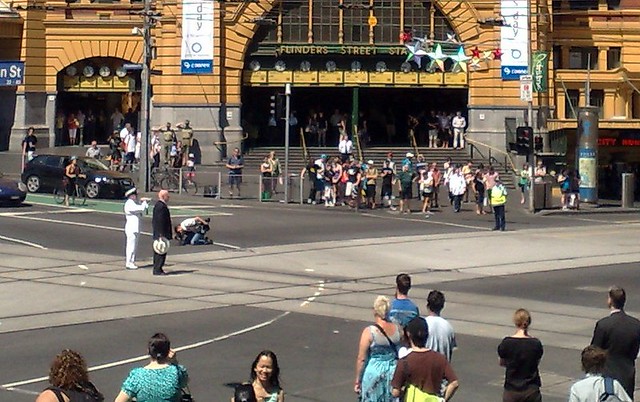 4 replies on “Lest We Forget”

Ah crap a lifetime of either being at work, school or university on this day has meant left to my own devices I totally forgot about it.

(damn you online news why didn’t you remind me!).

Ps. what’s that guy doing on his knees. If he was slightly downstreet I’d be calling shenadigans between him and the guy in the black suit!

He’s some kind of photographer person.

I hope his camera was strong enough to catch that hot macro zoom action on the road surface he was going for.

Was he there for a story on how even ants stop for remembrance day?

It has been 91 years since the guns fell silent over the Western Front. Let us never forget the sacrifices made then, and since then, through to today. The Australian way of life is a great one, free to express ourselves and live our lives as we choose, with the freedom to have discussions such as we have on this forum. Along with our Allies, from battlefields such as Gallipoli, Flanders, Paaschendale in WWI, Kokoda, Tobruk, El Alamein in WWII, Binh Ba, Long Tan in Vietnam, and to today in Oruzgan Province in Afghanistan and in Iraq, Australians have shown that we are willing to fight for the cause of justice and freedom. And don’t forget that we ensured the freedom of the world’s youngest country- East Timor!

It is worth knowing that in WWI, Australia suffered more military deaths as a percentage of overall population than any other country in the world. In WWII, Australia came so close to Japanese invasion, that the Japanese had begun printing post-occupation currency! It is a shame that we don’t fully understand the contributions Diggers have made throughout history- El Alamein was the turning point of WWII against the Germans, and Diggers played a pivotal role. Tobruk, where Diggers held that port town under siege from the Germans for 7 months. I recently got around to watching a Hitler Channel (History Channel, for those who are unaware!!) documentary of the Battle of Long Tan- 100 Diggers fought off North Vietnamese troops estimated at 1500 strong.

So indeed, let us remember, and let us thank God that we have had, and have such brave men and women defending this wonderfully free country!