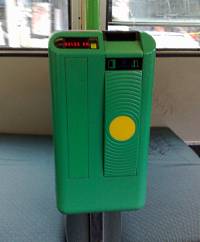 From time to time you’ll see someone having a whinge that they got on a tram and nobody bought a ticket or validated one, and therefore they must all be freeloaders. For example these comments on the Herald Sun web site:

On every tram i board, only one person out of the 30 on there actually use a ticket!
— Lindsay of Adelaide

We already have defacto free travel in the city anyway. Hardly anyone validates a ticket on the trams (You might be lucky if it is one in tweny people that validates their ticket).
— U No It Makes Cents of Moorabbin

It’s not actually true. Many people don’t revalidate because they already have a valid ticket, they can’t be bothered, and because they see no reason to go to the effort to do so.

As Metlink said recently at the Train Services inquiry:

Mr O’DONOHUE — Of the 38 per cent of trips not validated, how many of these would be fare evasion?

Mr CAROLAN — Our estimates are that fare evasion on trains is a little bit less than 10 per cent of trips made on trains, so that means there are a lot of people who do not validate but who have a perfectly valid ticket. That does not really surprise us. It is an unfortunate characteristic of our system, because we would preferably have everyone validating who should validate. But there are a lot of people who have long-term periodicals; there are quite a few free pass-holders; there are some people with serious disabilities who are not required to validate. The gap is not all that surprising, and a number of those people do not need to validate in the sense of the physical access to the system. We all know that at the city stations you need to validate to get through the barriers, but there are many suburban stations where you do not, so if people are making a journey between pairs of suburban stations where they do not need to activate the barriers and they have a weekly or a monthly ticket, they may not validate.

[Note: this is draft transcript, and may not be 100% accurate]

That was about trains, but it goes doubly for trams, where there are no physical barriers that require a ticket to open. (On the trains, if you haven’t revalidated at your boarding station, your ticket won’t open the gates, if there are any, at your destination.)

It’s particularly true on CBD trams, where the likelihood is that people taking short trips have got into the CBD by public transport, using an already-valid ticket.

Of course officially you’re meant to revalidate on every trip. The theory is it helps them gather statistics on passenger use. As the auto-announcements on some trains say: “Help us to create a better service for you by validating your ticket.”

But it doesn’t actually work that way. If you enter a CBD station, and exit at a station with no gates (which is most of them), they have no idea which line you caught. If you board a tram and revalidate at the Town Hall, they don’t know if you got off it at the Arts Centre or in Carnegie.

All this is why they have people out a couple of times a year with clipboards, manually counting the loads. (This week they appear to be doing the Burnley group lines.)

Besides which, all the information from manual counts, and from AM peak validations from train passengers coming into the CBD (arguably the only time and place on the network where the validation data provides something accurate and useful) didn’t prompt the government to buy and deploy extra trains as patronage grew. Instead they tried to pretend it wasn’t happening, scrapped old trains, and subsequently got caught on the hop and had to buy some back and order lots more.

The problem here is not a lack of statistics.

17 replies on “Why do people sometimes not revalidate?”

Good summary. So almost 3/4 of train passengers who hadn’t validated had the right ticket. From the proportion of people i’ve seen nicked on trams I’ve been on, I’d say it was at least 90%.

Just had a look at the new ticketing manual, btw. It looks like my question was answered: as long as a ticket is scanned on within the 2 hrs, you can complete the journey – so it shouldn’t charge you again if it takes longer and you scan off at the end like I was wondering. (p 57, top)

On the other hand, maybe I missed it, but it looks like off-peak zone 1-2 tickets have been quietly abolished. p. 68 says “For customers travelling in three or more zones, Off-peak 2 hour and Off-peak Daily short term tickets are available.”

My partner refuses to revalidate. He says he has a valid ticket, why should he bother. I have given up too unless on a bus or train.

The main reason on the tram is that if you try do so you will be on your arse when the tram driver takes off without warning and you are not hanging on to anything.

Flerdle, I don’t have the page ref handy, but p68 is basically a replacement for V/Line off-peak fares; in another spot it talks about an automatic discount for Z1+2 trips outside peak-hour, thus replacing the current Off-Peak Daily.

Also, the table on p59 note the big blocks of “n/a” in the Melbourne travel area under “off-peak”.

My guess is they’re leaving that open for possible further future off-peak discounts; they’ve speculated on it before.

The reason that Adelaide person is remarking that nobody validates on our trams is because you can’t – ever since the tramline rebuild and extension the service has been unable to cope with demand, always absolutely packed to the teeth like sardines and trams even missing stops because they’re too full. Passengers simply cannot get to the validators, and Adelaide Metro are fully aware it’s been going on (more trams have been purchased, not only for the continued extension of the system currently under construction but to increase capacity on the existing stretch).

Can’t help but laugh at witnessing such chaos, given the Liberals (in an almost dictatorship fashion) demanded there was absolutely no way in hell anyone wanted nor needed the original extension (and continue to do so about the latest extension)… sure seems reality proves otherwise…

Probably the reason most people on trams don’t validate is not because they are freeloading – they already have a valid ticket. Eg if you change trams after validating a 2 hour ticket, the ticket is still valid as long as it is within the 2 hour period. There’s no need to revalidate as long as it has the correct expiry time on it.

I have a yearly which I don’t validate (apart from the initial validation to have it record an expiry) … my thinking is this – the break-even point between paying for a yearly and the equivalent in monthlies is so slim that if I don’t use it for almost every day of the year that I can, I’m losing money on it … so, knowing that, it’s pretty obvious that passengers with these tickets are committed to the system already – why risk the health of my only token to unreliable ticket reading machines on trams? If I had a monthly or even a 2h x 10 this might be less of an issue …

When I’m back in Australia and use PT, I *DO* re-validate as, I thought, it might genuinely help those who organize PT services. However, reading what Daniel has been posting recently, if the re-validating serves no useful purpose, why the heck do it? Or why wasn’t a comprehensive system originally built in that would detect (by unique station barrier /tram/bus codes) when and where you got on/off? As I write this it sounds a bit 1984-ish – my transport card recording all my movements, but anyhow…

In any respect, after reading the plans for myki to charge those who don’t re-validate when leaving a train/tram/bus, I’m wondering if they will be able to justify such a sting, especially if this user-tracking system is not in place.

Oh the article about myki is here:
http://www.theage.com.au/national/there-will-be-system-glitches-myki-users-to-cop-penalty-20091020-h605.html

There is simply nothing more depressing and soul-killing than driving a late-night tram, running a little bit late, and picking up nothing but freeloaders (many of which I doubt have a ticket). I often ending up thinking “why do I bother being so helpful and polite to these people who can’t manage their end of the bargain?”.

However, the flip side to all this is to expose the classic aussie philosophy of only having to do something when you have to (eg train barriers). In the end, people will only pay for the service if they have to and leaving massive gaps in the system only encourages evasion. I’m annoyed mostly at Myki because it’s not doing anything to plug these gaps – it merely makes data collection (which given the gaps is fairly useless) more accurate.

Hang on. So I also have a yearly ticket, and if I don’t swipe off somewhere by accident then I’m going to get fined??? And then I’ll have to call customer service to get it waived? Ugh!

Tony, for what it’s worth, the Myki tracking is, in theory, better than Metcard, because it tracks the start and end of each trip. However…

Rob, I actually find myself much more likely to validate on a tram if it’s relatively empty, and if the driver has kindly held the doors for a few extra seconds to allow me to board. Agree with you though, Myki won’t plug the gaps the fare evaders use.

Liz, No. It turns out there is no Default Fare for Pass holders, provided the trip starts in a zone covered by the pass.

Rob: I like to validate on the late/off-peak trams, since I get on and off at the last stop and the drivers are always nice – but not if it’s the awful bloody D class trams. They’re so uncomfortable that it feels like a way to protest (totally useless i know but I feel a bit better about it).

Interesting about no default fare on the passes – will trams run faster once pass holders work out they do not “have to” scan off on trams?

Daniel, do you know whether the inspectors’ hand-held scanners can work out whether a passholder has scanned on for that particular trip? That is, will there – unlike now where they look at the date, not the action you might have done earlier, since they weren’t there – be a penalty for not scanning on/validating if you “hold” a “valid” ticket?

Get rid of the scanning off on trams, already!

From Tony’s Age article: “On current spending levels, a total of $17 million a year would be saved by public transport users in Victoria if myki was adopted and used correctly, Government figures show.”

Also: Will there be yearly tickets? Do they have to swipe off trams and buses?

Flerdle, I expect the AOs’ scanners will be able to work out if a pass holder has touched-on, but that (as now) they’ll be instructed not to bother issuing fines if one hasn’t. They’ve got plenty of non-ticketholders to find.

Josh, yes, Yearlies (including Commuter Club eg the PTUA deal), will exist as a “Myki Pass”. They are meant to touch-off trams and buses, though they’re also saying that if the Pass is touched-on in a zone the pass is valid in, there’s no default fare set — so no penalty for not doing so.