Some people believe public transport should be free. I’m not one of them.

I will admit that twice (so far) this month I’ve taken advantage of the Free Weekend Zone 2 Buses deal. It’s been enjoyable, and fairly relaxing, but only after doing way too much work (more than most normal people would do, I’ll wager) checking timetables and researching alternate routes to avoid the long waits between services.

On these free weekends, are the buses more crowded than usual? No. Are the roads less busy? No. Cost is not the main factor here.

As patronage has risen, so has revenue. Across Melbourne, fares are now pulling about $580 million per year — up about 60% in the last 5 years. This in fact disproves a common urban myth — that the revenue only just covers the cost of the ticketing system. Even the astronomical cost of Myki comes out at about $130 million per year (for the first ten years, which includes startup costs; supposedly around $50 million per year after that).

So making it free would mean forgoing hundreds of millions of dollars per year… all money which could have gone into making the system better, which is the real key to getting more people using it.

Now there’s a proposal to make travel within the CBD free. I like that idea even less. 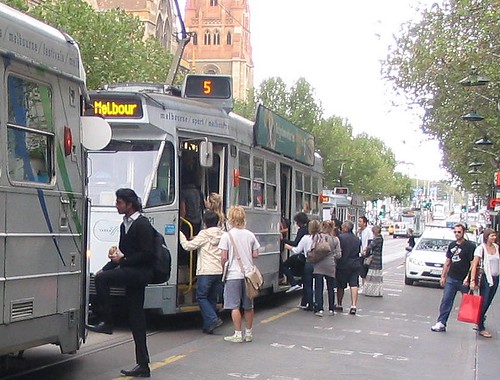 Who would benefit from free CBD travel? The vast bulk of people coming into the CBD do so by PT, thus already have a ticket to travel around the CBD.

Tourists? Sure, a benefit there, but they’re arriving into Melbourne in record numbers — I don’t think the prospect of buying a Daily ticket is holding them back.

Country visitors? If they arrived by train, they already have a ticket they can use in the CBD. 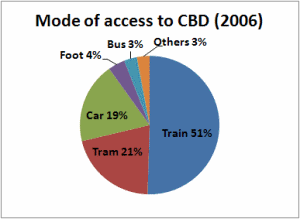 No, the main beneficiaries would be that minority of CBD commuters (19% and dropping), the motorists — the bigwigs and revheads who get in their cars every day, battle it out through the traffic, clogging city streets (and delaying those of us in trams and buses in the process) to park in their company parking spots.

What, and now they want a free tram ride to their luncheon appointment, so they don’t have to pay or walk?

The trams around the CBD are packed enough as it is, especially at lunchtime. We certainly don’t need to encourage more motorists into the CBD by giving them a free ride once they get there.

14 replies on “No, Public transport should not be free”

A silly idea, I hope it gets nipped in the butt before it gathers more steam.

The last thing trams need in the city is more people using them. Even yesterday, Sunday, when we were using city trams, one after another with standing passengers, if not full.

Regarding free trams in the CBD. I think the issue is that tourists and others who don’t use public transport regulary find the ticketing system confusing. Hence, eliminate the need to buy a ticket in the centre of town.
Mmmm. Maybe they should make the ticketing system simplier? Oh yeah, Myki will do that!
Rog.

Perth has had free CBD public transport for years and it works really well. You people have no imagination. It reduces short travel within the CBD by car. The heavy use of the free City Circle trams shows that there is a demand for short trips within the city. At moment if I could pay 50c for a few stops in the city I would, but there is no ticket available. Making it free is much better.

Not very convincing to me I’m afraid, Fitzroyalty.

The HS report says it would reduce short car travel by 1500 trips per day. If true, that’s hardly any benefit — a single lane of traffic is about 2000 vehicles per hour. And we already know from what’s happened in Hasselt, Belgium that more trips are attracted away from walking and cycling.

The central-city trams are already packed most of the day. What’s needed is more of them. How do we achieve that if we’re going to reduce the funds from revenue?

And why exactly do the majority of fare-paying PT users, who do the right thing and leave the car at home, have to subsidise those who choose to drive into the City?

The figure quoted by that report is conservative meaningless speculation. We all pay for some of the cost of PT via taxes so it should be used as much as possible. Instead of finding excuses not to use it people should always be encouraged to use it. Maybe some of those drivers you seem to hate may start enjoying their free tram rides in the city and be converted to PT and start using it for their commute.

You may well be right on the estimate. I’m still waiting to see the actual report — I haven’t found it as-yet on the CfM web site.

But my point remains. Free does not mean lots of people will switch out of their cars. The buses in zone 2 have not been packed during the free weekends. The roads aren’t empty on Christmas Day when PT is free. Many trams in the CBD are already packed. And it’s yet to be proven anywhere in the world that free CBD PT leads to people using it and paying for it elsewhere.

(By the way, it would cause big operational headaches on buses and trains, essentially opening them up to the kind of fare evasion trams already suffer from. I can only assume Perth’s buses suffer from this. It does appear to be happening in Adelaide, with its tram’s free section, and little ticket-checking elsewhere on the route.)

Yeah, let’s make PT free! And while we’re at it, why don’t we just forgo any pretense of a capitalist society, where people EARN the right to live within society, and just go full tilt socialist, where we’re GIVEN the right to live by the government! Stuff it, let’s just go all the way- full tilt hammer and sickle communist!
What is wrong with people paying their way through society, huh? Have we become that pathetic and whiny that we expect the government to provide everything for us? Don’t ever thing that anything the government gives for “free” is truly free, it always has a price- your $900 stimulus check now means higher taxes in a few years time!
If you’re going to use a service, then you ought to pay! And if you expect services to get better when there is no profit motive for the operator, you may as well book a one way trip to Cuba!!
Having said that, the system is up for abuse- so it is up to the customer to vote with their wallet- poor service means poor returns!

By the way, one of the reasons the Free Travel Zone is popular in Perth is because they don’t have Daily tickets like we do in Melbourne. So there’s a benefit even for those who commute into the CBD via PT; it avoids them having to pay extra for lunchtime trips.

As a cycle comuter who works in the boon-docks (bottom end of Bourke St, Docklands) I would welcome free public transport in the city. If I want to get to Myer, DJ, QV or any semi-reasonable department store I have to either walk (20mins each way) or pay for a two hourly ticket. I have no problem with walking except that it takes up half my available time.

I’ve long held the opinion that public transport should be free within the city bounds and that that should include trains, a freely available single trip metcard would cover that. And could be implemented under the current system.

The next significant move in relation to fares should be the abolition of Zone 2 fares.

I’ve got some sympathy for cyclists, though they’re outnumbered (in the CBD) by car drivers about 6-to-1, so it would still benefit the motorists more.

Yeah the penalty for crossing a zone boundary is a real problem. I’m not sure a flat-fare is really the answer (it would mean an increase for those people who currently travel only in zone 2), but other solutions might include a slightly increased number of cheaper zones, with a much gentler cost increment. (Removing zone 3 didn’t really help in this regard… a fairer deal might have been cutting all fares, particularly the two-zone and three-zone fares.)

I live close to Werribee train station and work in Fishermans Bend.

If I choose to take public transport my trip time is eighty five minutes.

If I drive on a good day the trip is forty minutes. (during school holidays – 30 minutes) and of course have the safety and flexibility that a car offers.

There has to be an incentive to have all us less well off people who are being plonked out on the fringes of Melbourne to use public transport.

The only real personal advantage that I gain from a three hour public transport commute is that I get a lot of reading done and a little bit of exercise between walking from Flinders Street Station to Market Street where the bus departs and arrives.

I also cant see the logic in the state spending millions of dollars to build hundreds more parking spaces at Laverton train station when at Aircraft Railway station (in Zone 2) 600 meters away there is unlimited available parking.