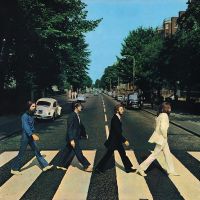 My old school friend Raoul used to say he went into Brashs in Elizabeth Street sometime in the 80s and asked for Abbey Road and was told they didn’t stock reggae. I asked Raoul last week about the new remixed Beatles CDs, and he reckoned don’t bother unless you have a high-end stereo system — which I don’t.

On the other hand, as one of the iPod masses, I listen to a reasonable proportion of my music through earphones, which leaves you hearing more detail.

Anyway… I’m a sucker. When I saw it in JB Hifi for $19.99, I bought the new version of the Abbey Road CD — an album I’ve already owned in two formats (cassette and CD — unlike some other Beatles albums I never bought it on vinyl).

Unlike the old one it comes in one of those awkward cardboard things which makes it so difficult to get the disc out in comparison with the jewel cases that it’s like they’re begging you to put it on your iPod and forget about the CD.

There’s a nice booklet in there.

And the sound? Via headphones at least, it does sound more crisp, really great for a forty-year-old album. You can hear some of the detail of the individual instruments that couldn’t be heard before, such as Ringo’s tambourine on Maxwell’s Silver Hammer. And the spread of instruments between left and right seems more pleasing. I like it.

Some noticeable things on specific tracks:

Come Together — doesn’t sound much different to start with, but the heavy guitar is more heavy.

Oh Darling — a lot more detail from the guitar in the right speaker, and you can hear Paul’s worn-out voice much better.

Octopus’s Garden — this is a long way from being my favourite track, but I’m hearing little flourishes I never noticed before.

I Want You (She’s So Heavy) — the repeating bit at the end seems way “heavier” — dense with sound.

Here Comes The Sun — some interesting synthesiser notes and other sounds that have probably always been there, but are now nicely separated out and distinguishable.

Golden Slumbers — you can hear a lot more feeling in Paul’s voice, particularly in the lines “Golden slumbers fill your eyes / smiles await you when you rise”

The End — lots more detail here, love it. The sudden noise-to-silence cut-off at the end flies from right to left. (OK I checked the old version and it does that too.)

Admittedly some of the difference here will be from intently listening to new version, on the lookout for differences. As well as doing the MP3s from the CD at the highest bitrate possible to make the most of the remastering, rather than the 192 Kbps I usually use.

Will I buy more of them? Probably not — Raoul was right. Mind you, it was enjoyable listening out for all the “new” things I could hear, and I wouldn’t be disappointed if Sgt Pepper or the White Album shows up under the Christmas tree this year.

Might have to get a few of these. Still only have “The Red and the Blue” cassette compilations. Don’t know why the mono box-set is so popular.

Apparently right up to about ’67 or ’68 mono was considered to be the first priority when mixing, with the stereo ones chucked together somewhat haphazardly later, so the mono mixes are not only different, but considered to be definitive/better by purists.