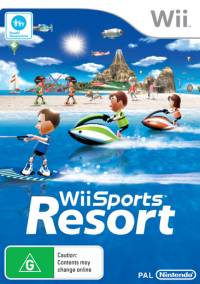 Okay I admit it, we fell for the hype, Jeremy and I. The demos of the game at the EB Games Nintendo Experience thing in Swanston Street, and Jeremy’s participation in a Nintendo event at Southland convinced us to pre-order Wii Sports Resort from EB Games. In doing so we gained an extra (so two in total) Motion Plus controller (and a recharger thingy that’s pretty much useless to us because we already have a stock of rechargable batteries — I might eBay that) along with the game for $79.95, not too bad for an RRP of $99.95. Thankfully I didn’t have to attend the late-night launch event to get the bonuses.

I think the first time I’ve acquired software on the exact day of release since Windows 95.

The Motion Plus thingies (which are basically a small add-on to the standard Wii controller) provide the extra precision needed for the game. Adding the Motion Plus to the controller is a little fiddly, but it can be left on for other games that don’t use it — though it changes the feel a little by being slightly bigger and a bit heavier, which I found a little cumbersome for Wii Sports tennis, though baseball was okay.

Anyway the Sports Resort game is a lot of fun. Twelve sports in all (and numerous games within each sport), and I’ll summarise my first impressions:

Great: swordplay, air sports, archery, table tennis (amusingly at one point instead of Match Point, it announced “For The Win!”)

Haven’t played the others yet: golf, bowling, power cruising.

The swordplay in particular is a helluva lot of fun. Playing against other players puts you on a platform and you fight it out until one of you falls off into the water. The other mode is playing a kind of action-movie, battling hordes of other little sword-wielding guys. (Isaac pretended he was Luke Skywalker fending off stormtroopers.)

Anyway, the whole thing is a lot of fun, particularly with two players.

By the way, also recently got Guitar Hero World Tour. On sale nowadays for about $90 including the guitar. Didn’t want the full band set clogging up my house. It’s also good fun, though haven’t yet had a long go at it. I wonder what real guitar players think of it.

2 replies on “Wii Sports Resort – For The Win!”

I’m still happy with Guitar Hero on PS2. Like you, I don’t really want the entire band set sitting in the corner, so I’m happy sticking with the cordless guitar (and the old PS2!)

Yeah, interestingly I did a bit of reading that suggests the makers of Rock Band are co-operating with the Guitar Hero mob to make the guitars compatible with both sets of games, so if I feel so inclined, I may be able to get the Beatles Rock Band game when it comes out and play it with the same guitar.

Also, I should go looking for a guitar stand so I have somewhere safe to store it!