I was playing around with the Wii Weather Channel. If you zoom out, then hold down the button as you flick the controller just so, you can send the Earth spinning around wildly.

Anyway, if one looks around southern Australia, various prominent cities and towns are highlighted.

One caught my eye: Keith. 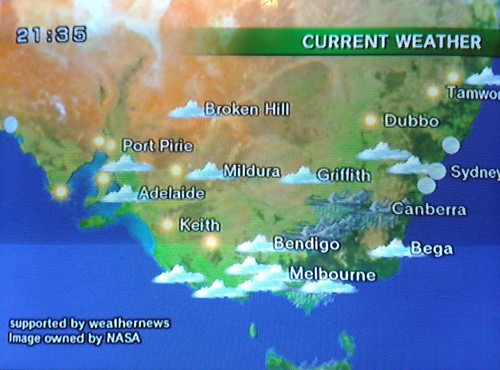 I’d never heard of Keith. Why was it highlighted alongside such significant settlements as Melbourne, Mildura, Bendigo, Bega (famous for its cheese, don’tcha know?) and Canberra?

Was it even real? Or had someone named Keith managed to hack into Fortress Nintendo and get a spot named after himself as a joke?

I checked. It turns out that Keith, South Australia is real.

I’m sure it’s a very nice place, but it does make me wonder why it’s so prominent on the map at that particular zoom level when it’s apparently only a town of 1200 people, while other nearby places such as Horsham (pop 14000), Warrnambool (pop 30000) and Mount Gambier (pop 23500) don’t rate.

Keith is a nice little town and a good place to stop on the drive from Melbourne to Adelaide – there’s no better way to refresh yourself than a vanilla slice and a Farmers’ Union iced coffee :)

We always stop at Keith on the way to/from Adelaide. The BP roadhouse on the Melbourne side serves a great breakfast and the staff are uber-friendly. I think I bought my sunglasses there too.

I reckon it got a guernsey because it has a weather recording station (see here http://www.bom.gov.au/weather/sa/sa-observations-map.shtml). Just like little known places in Victoria like Westmere and Kanagulk!

It has a weather station (http://www.bom.gov.au/products/IDS60800.shtml) and is roughly half way between Melbourne and Adelaide. What more do you want? They could have chosen Keith West :-)

It’s the same when you fly and they show the animated map. Some of the locations highlighted are very minor indeed. Of course, they are shown because they have navigational beacons and hence are known to the system…

As Michael and Andrew say. This map thing seems to happen quite often with place names. Must bring a few extra dollars into Keith.

I think the more important question is, do you know anyone named Keith? My parents were friends with a Keith when I was growing up, but I don’t recall ever meeting another one.

I have a good friend who is a Keith but he’s the only Keith I know.

It’s a name, a bit like my own, that has all but disappeared from the naming lexicon. Unless it’s spelled (or spelt depending on your lexical proclivity) Keeth …

There is a Keith in Scotland (well, many people called Keith, but there is a place, too)

Only reason I know about it is that you pass through Keith on the way from Inverness to Aberdeen.

I did know of Keith – went through it on the Greyhound coach to Adelaide once.

I can claim to have known at least three Keiths. In all cases they were older and are dead – so it’s not a modern name. Plus WA had a former health Minister Keith Wilson – also dead.

If you want a map showing obscure suburbs/placed around Melbourne, nothing can beat ABC’s digital radio coverage map , where the places are random: http://www.abc.net.au:80/radio/digital/img/Melbourne_DAB+.jpg

I work with a Keith (in his 40’s), who’s from South Africa, perhaps Keith is more prevalent over there? And one of my neighbours in my apartment block is a Keith in his late 20’s. He’s Asian, so I wonder if it’s an anglicisation? (is that a word?)

Just scanned the corporate directory at work; there are 3 Keith’s out of approx 2500 employees.

I don’t know any Keiths, but sure would like to meet a Keitha! I refer you to the excellent Flight of the Conchords ep last week.
http://www.youtube.com/watch?v=hoF_fa9TMDk

nice blog btw…my first time here & I will be back!

Well have to admit I live in Keith and yes it is a typical country town! and also i do know of a Keith who lives in wait for it Keith so there you go

I was born about 30kms from Keith, a quiet country town which only managed to start winning the local footy recently when they signed Tony Modra to play for them.

I agree with the Adelaide stop over postings! It’s a bit of a ‘blink and you’ll miss it’ place, but for those in the know it’s a great place to stop, stretch the legs and have a break.

Many of the great “It’s Christmas! Let’s get 5 people who barely get along in a 3 bedroom house into a small car and drive for 9 hours” road trips I enjoyed as a child have been displaced by the large number of bypasses along the area. These days if I want to step back in time, I have to go out of the way quite a bit. The sad thing is that once the bypass is put in, the town tends to shrivel.

i am from keith and i am proud to know that so many people know abut my little town.

I love small country towns, driving between Brisbane and Sydney quite a lot it’s dissapointing that many are now bypassed and dying, I tend to search them out if I have time.

We’ve got a football team in Scotland called Keith FC. (Their Wikipedia page says that they’re most famous for being stuffed 10-1 by Rangers in 1996.)

Bob Hawk was born at Bordertown………thats just down the road a bit…..

Been through (and stopped at) Keith a number of times – I think it’s real claim to fame is the jeep-on-a-pole – you can just make it out from google street view I think. Or for a better photo try: