I’ve had few real idols; people of whom I could genuinely say “I want to be like them.”

In my early-to-mid 20s, Ben Elton was one of them. Amazingly funny, both on stage and in his writing. I wanted to write stuff that was half as good as his books, but never quite managed to write anything that was engaging enough to last over the length of a novel. My best attempt was The Year 2031, and even that wasn’t terribly long.

Ten years earlier, it was Tony Crowther. He was perhaps five years older than me, and a game programmer extraordinaire, writing hit after hit on the Commodore 64. I loved his game Blagger, and the sequel Son of Blagger, then got through Monty Mole (but only with help from a walkthrough). For a while I was hooked on Potty Pigeon, then Loco, which I enjoyed more than its astoundingly similar-looking followups Suicide Express and Black Thunder.

After that I moved off the Commodore 64 onto other things, and lost track of him and his games.

I suppose I dreamt in some ways of writing my own games and making a fortune from it. Back in those days many commercial games were written by solo programmers, or small teams. These days the gaming industry is dominated by borg-like big development studios, and Suits. 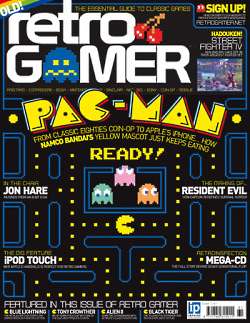 The other week I was in MagNation and noticed a copy of Retro Gamer which featured an interview with the man, as well as a big feature on Pacman. Wow. I was in a rush and made a note to go back and buy it the next day.

When I went back in, it was gone. Replaced by the next edition. I asked if maybe it was lurking somewhere in the shop. Nope. Everywhere else I looked was the same. Gone.

I had a look online. There are quite a few articles about Crowther, but most of them are reprinted from the 80s. I was also interested to know what he was up to these days, and what he thinks looking back at those old games — precisely the sort of thing Retro Gamer does well when they find people to interview.

While I was pondering that, Rae (who had been kindly checking newsagents near her work for it) pointed out I could look on Ebay, which was a brilliant idea. I found a copy for UKP 7.70 including postage, about $16. Much more reasonable. I’m eagerly awaiting its arrival from the UK.

In the mean time, I’ve discovered that Crowther has in fact been assimilated into the borg that is Electronic Arts. One of the games he worked on recently-ish was Harry Potter and the Prisoner of Azkaban, which was one of the last games I bought for the XBox.

And me? Well, I did start writing a few computer games, but never quite finished any of them. But I did end up making a living out of writing software.

Who were your childhood idols? Where did they end up? Did you get to be like them?

The “High Voltage SID Collection” also comes highly recommended if you like the music of the C64, there are thousands of songs on it. Free to download from the website of the collection. I have been in touch with a current Chiptunes artist GOTO80 and would love to go see him if I go overseas.