The most efficient way of moving people is using their own two feet. 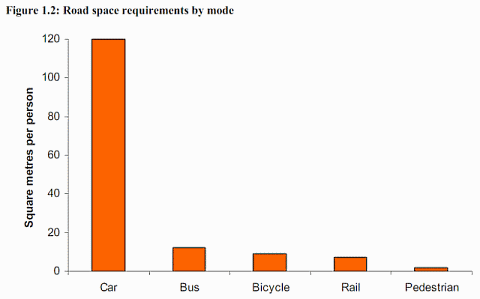 …and here’s a practical example:

Don’t bother with the sound, it’s crap due to some noisy machinery nearby.

Anyway, you get the idea, right? The pedestrian sequence here shifts an order of magnitude more people than go through in cars each hour.

What do you call these intersections that allow people to move in any direction? It’s not a zebra crossing, nor a puffin, pelican or toucan… ah, found it — apparently it’s known as a pedestrian scramble. Not as catchy without an animal name.

Anyway, I do wonder why there aren’t more of them. As far as I know this is the only one in Melbourne, but other locations would really benefit, with Bourke/Spencer Streets being a prime candidate.

Elsewhere, these might not work, but there’s a lot more than can be done to improve pedestrian amenity and get more people walking.

12 replies on “How to move people efficiently”

Saw heaps of the pedestrian scramble crossings in New Zealand in 1978. They were fantastic from a pedestrian point of view.

Most intersections near the malls in central Perth have dedicated pedestrian phases. For a while, there were signs prohibiting diagonal crossing, but I think they have gone now. Someone obviously worked out that was daft, and was ignored anyway.

I think they’re a good idea but either there’s a traffic management reason that they’re not used, or it’s all about tradition. (Victoria has traditionally had none of these (except that one), and NSW and SA have used them for a while. There would be people at VicRoads who just say, “We don’t have them here, they have them in other states.” and don’t even think about why.)

I just checked the Austroads Signals Guide (Guide to Traffic Engineering Practice part 7) and it says exclusive pedestrian phases “normally result in longer delays for both pedestrians and vehicles” and should therefore be avoided if possible. Apart from saying “normally” where it should say “usually”, it seems to me to be a statement based on nothing other than an established opinion. No evidence is offered in the guide to support it.

Thanks Philip, that’s interesting. (Yeah I seem to recall a crossing like this in Adelaide.)

I would think that in situations with low levels of road traffic, and high levels of pedestrian traffic, short sequences for vehicles would allow short waiting times for most users, and good throughput.

Perhaps one of the problems here is that road engineers consider vehicle throughput to be paramount, rather than prioritising the movement of people.

You’re right about the Burke/Spencer intersection… It would be interesting to count how many people actually cross in one go. It must be 100+ people per crossing, maybe even 150+, which peak hour being even more…

I discovered pedestrian scramble intersections in Christchurch, NZ last year and just thought “well done”. They weren’t everywhere but the inner city intersections had alot of foot traffic and I appreciated being able to get to where I wanted in one light change instead of two.

I’d always understood that the Flinders/Elizabeth crossing was called a Barn(e)’s dance – named after the man who designed it. But not sure where I gained this information.

We call them “scramble crossings” here in SA. We have one at the intersection of Rundle Mall/Rundle Street/Pulteney Street, plus there’s one at each traffic intersection adjacent to the tram stops in the middle of King William Street (for easy access from any corner to the platform).

There are quite a few in Sydney, loved them when I was living there and love the ones we have in Adelaide.

That 120m2 is an amazing statistic that tells a lot about our priorities when compared to other things we value.

In other words a car takes as much room as a house and more than many units.

And on a per capita basis it’s even more.

Including land would change the stats. An average house occupies 600m2 with 3 people, or about 200m2 per head. About double the space occupied by the car.

But the house will probably in the suburbs, and not occupy high-rent CBD or major highway land so on a dollar per square metre basis the car space used might be greater.

There is a time component. A house has 100% occupancy (as you’re using the land exclusively even if you’re not home) whereas a car on a road isn’t. And because most cars won’t be on the road for more than 10% of a day that might be a reasonable occupancy figure to use.

It will probably then be less than housing but is a substantial ‘cost’.

we called them a “barn dance” too – Christchurch, NZ.

I’m pretty sure there were more in Melbourne when I was growing up. The one I remember in particular was the Flinders Street and Swanston Street intersection – yessir, right outside Flinders Street Station’s main entrance. I think we might have called them X crossings, but I can’t be absolutely certain about that.