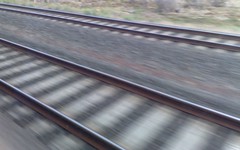 Why does Australia have problems with multiple rail gauges?

In summary, it seems to have gone like this:

And the mess went forward from there at the dizzying pace of the 1800s railway industry. By 1883, the Victorian broad gauge and NSW standard gauge lines met near the border at Albury. Meanwhile Queensland had gone with narrow gauge (3 ft 6 in), and met their NSW cousins at the border in 1888. WA also used narrow gauge, as did Tasmania and parts of SA.

(More detail and sources in Wikipedia.)

There was a break-of-gauge at Albury until 1962 when the new standard gauge line to Melbourne opened. Subsequently the Melbourne to Adelaide train the Overland shifted to standard gauge in 1995 when the Keating government standardised that line, mostly for the benefit of freight (under a project called “One Nation”!).

In the near future the V/Line trains to Albury will also switch to standard gauge. For now the other Seymour services through to Shepparton will remain on the present broad gauge line, though I wouldn’t be too surprised if they switch before too long. The Seymour line was the only one that didn’t get an infrastructure upgrade as part of the Regional Fast Rail project.

So, with the trend now towards standard gauge, wouldn’t it make sense to eventually convert everything, particularly the regional lines, to assist interstate rail freight in particular? And also to allow eventual high-speed interstate rail to use some existing tracks? Not necessarily as a priority of course, but eventually?

Probably. Which is why it’s puzzling that for the Regional Fast Rail project, they didn’t use gauge convertible sleepers. The sleepers can have extra holes added to aid conversion later for minimal cost. Given concrete sleepers can last 50-60-70 years, it would have made sense.

Neither are they doing so as they lay concrete sleepers on the suburban network. Sure, it’s not important right now, but why lock out the option for three generations?

Perhaps the lack of forward planning that got us into this mess in the first place is still around?

UPDATE: The information about the choice of gauges is commonly told as above, but turns out to be incorrect. In this research, it has been found that NSW notified Victoria of their intention to use standard gauge in 1853. This was communicated to Victoria, but Lt Gov LaTrobe decided Victoria should stick with broad gauge anyway. All this happened before the order for trains had been placed.

For a long time, i said who cares if vic is on one type and other state are on a different

but now that so much of vic has changed to standard gauge and that we need to see a return of freight moving by rail not road.

i think it is time to see all vic gostandard gauge

SA is in the process of completely digging up its train network, relaying everything from ballast up, concrete gauge convertible sleepers, electrification, and… standard gauge! Been a long time coming, but it’s finally happening!

Belair line has already been dug up and is now being re-laid – but will be the only line that will still remain broad gauge and diesel. Will at least be gauge convertible sleepers though.

SA obviously planned ahead. When I caught the train to Port Adelaide in 2007, there were already gauge convertible sleepers in place.

Fierce adherence to tradition and a lack of forward planning in the rail industry? Never!

What I don’t understand with most of Commonwealth and State infrastructure spending is where the whole thing goes pear shaped.

Surely the planners understand the issues and recommend appropriate, long-term solutions. In this case, the rail authority engineers must have recognised that guage convertible sleepers were likely to be required within the lifetime of the sleepers.

So, where in the pathway from idea to implementation to things go so wrong?? Does the relevant Government Department just ignore the advice of the people responsible for the business or do they somehow think they know better?

Or is action the most important thing. I’m reminded of your recent comparison of timetables Daniel. A one train reduction in services but multiple changes in ownership/colour/pamphlets/trivia.

Finding the funding must be part of the problem. But would it not make sense to extend the life of the project to make sure it was done properly rather than just done. To quote my dad, “More haste, less speed”.

I can’t help but feel that our current stimulus package will produce more examples of this sort of thing. We’re already seeing schools scheduled for closure having new buildings approved. And the national broadband network seems ripe for dodgy implementation – locking in generations to a 2009 vision that can’t help but be outdated as soon as it’s in place.

“The Hollowmen” and “Yes, Minister” really do feel too close to the truth.

What? Governments with lack of forward planning? I’m shocked! How could you _say_ such a thing?!